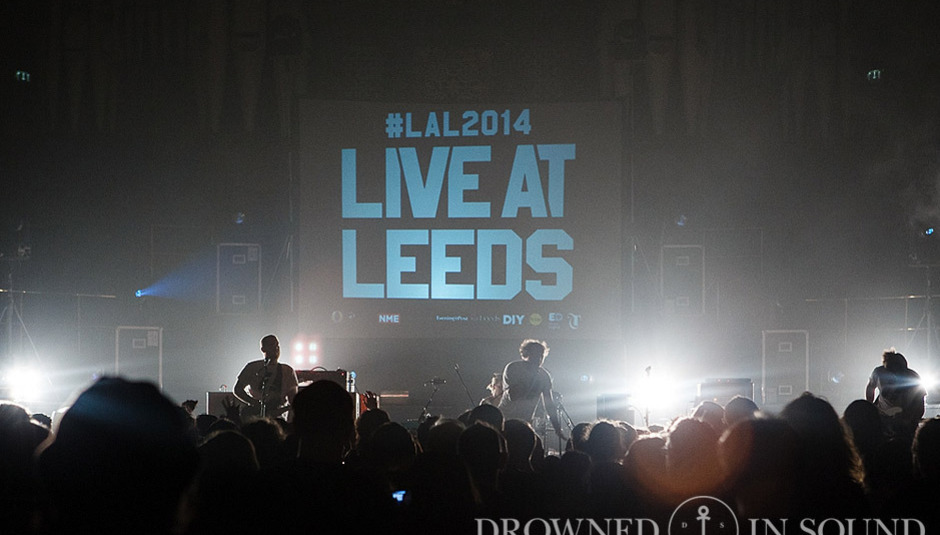 Live at Leeds is an ambitious, sprawling and fairly overwhelming multi-venue affair that sees 200 bands performing across 20 of the city’s different stages.

To cover everything that this rich festival has to offer, it would take an army of reviewers each equipped with a handheld teleportation device to zap instantaneously between the assorted venues. Regrettably, the sole DiS-owned Star Trek-style Teleporter 3000 gadget was under the exclusive use of our distinguished leader Sean Adams until he sold it in 2010 to help pay off his webspace bills so now even he has to travel everywhere by segway like an ordinary Joe.

Our reporters J.R. Moores and Daniel O’Dell traipsed around Leeds without even a skateboard between them to select the festival’s acts that particularly caught their eyes, ears and imaginations.

One of my first ‘must-sees’ was local band The Witch Hunt, who played possibly their biggest gig to date in the murky depths of Stylus. An obvious influence on the trio’s music is The Kills and whilst they are a great band it is an unflattering comparison for live performances, for Louisa is a frontwoman who must turn other bands green with envy, her vocals burst through the speakers and tickled the cobwebs in the far flung corners of the dark room. Paired with Chris’s bold garage-blues lines, it’s a goosebump-summoning concoction, never more so than on past single ‘Chairman’, deployed mid-set. A high benchmark had been set for the rest of the day as they prowled the stage for a dramatic rendition of ‘Army Man’ and drew raised-eyebrow approval from the many in attendance. Daniel O’Dell

I don’t know if it’s cos they’ve just appeared on music showcase for the masses Later... with Jools Holland but we’re packed like sweaty sardines into a one-in-one-out Leeds Met with a queue outside that curls right around the corner of the building just to see Royal Blood. You’ve got to hand it to any rock band who dare to use Jay-Z’s ’99 Problems’ as their intro tape. That takes balls. Four balls, in fact. Because there are only two members of Royal Blood.

Their sound is undeniably huge though, earning inevitable platitudes such as 'they make a helluva heavy racket for a two-piece'. An unfortunate Spinal Tap moment occurs when Mike Kerr enthusiastically bawls, “Alriiiiight Liverpooooool! How’ you doing?” Everyone makes mistakes (RB played Liverpool the day before). And I’m sure the monotony of touring makes everywhere geographically blurred. Kerr humbly apologises when he realises his error. But it’s not like ‘Live at Leeds’ isn’t written EVERYWHERE. On the walls. On the posters. On Kerr’s artist’s pass, etc.

Faux pas aside, the phat desert-rock riffs are big, dumb and derivative which doesn’t matter for the first few fun numbers but starts to tire after a bit. More troubling are Kerr’s vocals. Don’t his weighty bass licks merit a corresponding, growling, bestial roar? Kerr sounds more like he’s karaoke-ing his way through the Queen Rocks compilation. Uh-oh, there’s a chance Royal Blood might be Muse with beards. No wonder Jools was so keen. You’re better off wandering out of town to The Brudenell Social Club. Not just at this particular moment, but as a general rule of thumb. No queues here (not yet anyway). Cheap drinks. A less lairy and sozzle-glazed clientele. Bands who are far too good to appeal to the Jools Holland demographic, such as Primitive Parts who rip through a bunch of pleasingly spiky post-punk numbers, flaunting a kind of UK take on Pavement’s ragged college rock thang.

Well maybe Highasakite could appear on Jools Holland. Their sound’s too big even for Later... really. It’s certainly too big for the humble Brudenell Games Room. It’s so big you could imagine them representing their native Norway in the Eurovision Song Contest, if only they dressed more fabulously and had an army of topless drummers standing behind them. It’s impassioned Sigur Ros TV documentary soundtrack stuff. Their second number’s more up-tempo. No doubt they’ll give some folk the old goosebumps. But despite all their paraded Arena-sized melancholy, there’s a distinct lack of cynicism here. Which basically means, it is a tad Enya.

Next up are Solids. Another twosome. What is it with deafening duos at the moment? Is it the recession? Why split bills and earnings between four or five people when two of you can make just as much hullaballoo? A highlight of the festival, Solids sound huge but with sweet, melodic songs underlying all their heavy fuzz. Like Dinosaur Jr without the noodling. The shaggy grinning drummer resembles a young Mick Foley or perhaps the lovechild of Andrew WK and Animal from The Muppets. He’s having a ball and his glee is infectious. The guitarist has a tight sports strap fastening his spectacles to his head, so he can bang and shake his noggin around without breaking them or falling momentarily blind. Both members sing together and their voices match seamlessly. Unlike Royal Blood, you can tell that Solids’ songs would work just as well acoustically. But here they’re all rendered with as much meat as can be, like a scotch egg, and boy is it tasty. One bloke in a plaid shirt is stumbling around the room, off his rocker, punching the air with glee. A couple near the front look like they’re dry humping. Everyone else nods along, cheering raucously at the end of each number. Tell you what, if Dave Grohl doesn’t ask these guys to support the Foo Fighters, then Dave Grohl isn’t doing his job properly. J.R. Moores

When I walked into a bustling Belgrave Music Hall and saw the stage piled high with San Fermin’s instruments, it was clear that this wasn’t going to be any run-of-the mill performance. The eight musicians plucked the most jubilant and contained songs from their debut album and pumped them full of luscious choral “AAHHH”s, joyous brass and emotion. It reminded me of when I was ten years old and quit learning the saxophone to focus on endeavours of a more Nintendo nature, which I had never regretted until seeing their bass saxophonist and trumpeter spur the front row into a euphoric blur of limbs. As they ended on a lively cover of The Strokes’ ‘Heart In A Cage’ that saw the confident male and female singers passionately trading verses, it was evident that we’ll be hearing a lot more from this horde of merrymakers in the future. Daniel O’Dell

From a distance, this ragtag bunch look like the most unpromising 80s secondary school band. One of ‘em is wearing a bright green baseball cap. Someone else has got a camouflage coat. Another sports a smarter-lookin’ brown jacket. Another one wears all grey and sunglasses. The drummer looks like Andy Warhol. The singer is dressed all in black. Until he takes his top off that is. Male toplessness, hey? You have to be the real deal to pull that off, so to speak. You don’t want to look like Biffy Clyro. You don’t want to look like Johnny Borrell at Live 8. You’ve got to be Iggy Pop. You’ve got to be Henry Rollins. You’ve got to be David Yow. You’ve got to be Joe Cardamone from The Icarus Line. You’ve got to be Fat White Family’s Lias Saoudi who prowls, saunters, lurches, wiggles, wriggles and writhes like only a true frontman can. He’s got a small, amateurishly-inked tattoo of a heart on his left breast, the mad, cool, feral bastard.

Like their disparate charity bin fashion choices, the group’s musical influences are sourced from all over the shop. Punk, post-punk, lo-fi, noise, indie, baggy, funk, psych, and even a bit of the old Britpop swagger have been thrown into the gooey mix. In lesser hands such a heady concoction would jar, but here it all comes together so beautifully. Saoudi’s voice is like Mark E. Smith crossed with Tom Verlaine... wait, isn’t that perfection?! You could make comparisons to The Fall, Blue Orchids and the controlled and considered chaos of The Birthday Party, but ultimately the Fat White Family is an entity unto itself. Even their soundcheck proves more exhilarating than most of the bands I’ve ever seen. And I’ve seen over seven bands.

There’s been much hype surrounding this group, and who am I to break consensus? I’m very pleased to report that the hype is entirely justified and, in fact, the first person who writes any kind of revisionist, critical damnation of this wonderful group is a f&%£ing sell-out. The ‘Family don’t resort to any flour- or shit-hurling punk-rock pranks at this gig (thank God?). They don’t need to. They’re still the most exciting live group around right now. Even the wonkily slow abusive ballad thing ‘Garden of the Numb’ is utterly thrilling.

In a land being plundered of its libraries, post offices, health service, and all other empathetic concerns, in a cultural climate in which the John Lewis Christmas advert is the talking point of the year, the BBC’s ‘alternative’ digital station 6Music is dominated by Guy Garvey’s Elbow, and across the globe The Black Keys are still actually a thing, Fat White Family ought to give us some morsel of hope that the misfits and the outcasts and loonies are never going to go away no matter how determined the coalition government is to starve, slaughter and suppress those on the margins. Alex 'Howdy-doody y’all, we’re from ‘lil ol’ Sheffield' Turner doesn’t represent the fact that 'rock ‘n’ roll will never die' (he might just represent the opposite). But Fat White Family do. Even if they crash and burn, some other troupe of weirdos will rise in their wake, sooner or later, regenerating like a not-shit Doctor Who. I realise that now. About three songs in, a single salty tear escapes my eyeball to run down my usually jadedly-dry cheek. Not because a particular lyric has resonated with me or some chord progression has tugged at my heartstrings. Just because this is quite simply one of the best things I’ve ever seen in my life and I feel privileged to be alive to witness it. It feels like watching the Sex Pistols at Manchester’s Free Trade Hall. Or Springsteen at Harvard Square Theatre. Or some early Velvets jamboree. I laughed. I cried. I would’ve bought a t-shirt but I couldn’t find a merch stand. Catch them now. I’m begging you. One of them will probably die soon, they’re that bloody good. Catch them before that happens. Or before one of ‘em turns into Pete Doherty. Or at least before it all goes a little bit Eighties Matchbox B-Line Disaster.

Musings on Sony's New Tape That Can H...