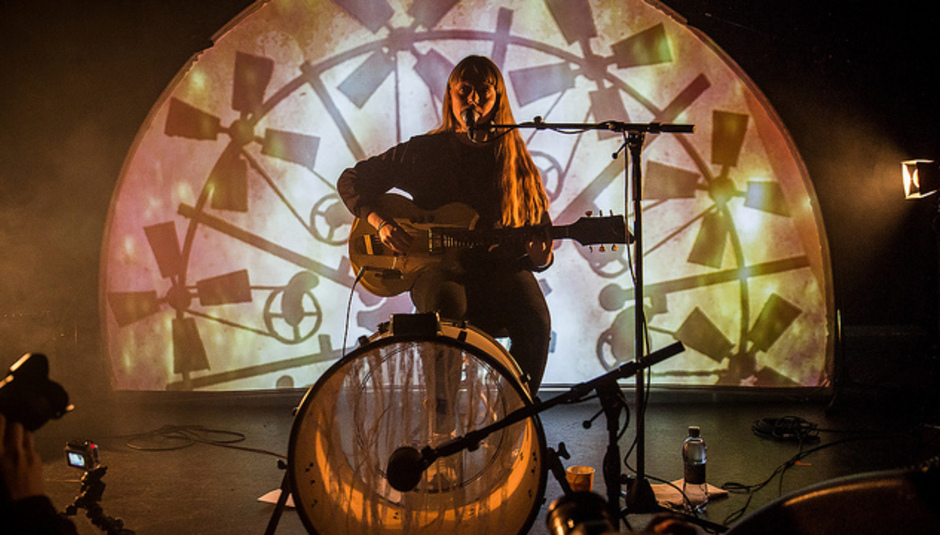 Having a festival which highlights Nordic music makes more sense now than ever. Or rather, its relevance to music fans and industry types outside of the Nordic region must be greater now than ever. The famed prohibitive alcohol prices may be a deterrent to foreigners, though it shouldn’t really be a factor. Oslo is a welcoming, well-proportioned city and not everything has to revolve around the consumption of alcohol, even when watching live music, right? What better combination of all of the above, then, than the annual by:Larm festival?

The festival has taken place in Oslo since 2008, having previously been held in other cities (Trondheim, Stavanger etc.) across the country. Though by:Larm has naturally grown since its beginnings, this year sees a reduction in both the number of acts (down to 111) and venues. Previous years involved more 'far-flung' venues but this year they are mostly concentrated around the main hub of the square in Youngstorget. As well as the live music, there is also an extensive seminar programme, ranging from Q&As with renowned industry figures and other, more specific, subject areas including the issue of sound quality in streaming, for example.

This being my third time, I’ve found that the real fun of it is often in the hit and miss of wandering around with no aim other than to see something; with no rhyme or reason other than 'I like that venue', 'this place is pretty close', 'terrible name, interesting biog?' and so on. It's a formula which has served me well for years - it may not always lead you to the band that will change your life, but it might take you to a place, both physical and mental, that you’ve never visited.

When a reliable source tells you that a band is currently one of the best in Norway, you take notice. Especially when the band is due to start playing 15 metres away and in 15 minutes; convenience is often underrated and undervalued. Tremoro Tarantura were that band, as they blew away cobwebs and eased the frustration of queues (Jaakko Eino Kalevi is an elusive fellow...) with an enigmatic and pummelling performance at Revolver. They played the majority of their set behind a cheapo black tasselled curtain before tearing it down with either their music or their bodies - or possibly both - in a flurry of mucky riffs and flailing limbs. There is plenty of great, noisy and assaulting music coming from Norway at the moment, but these guys have a smattering of obscure influences and spades of slow-moving, gut-rumbling intensity.


On the other end of the unknown-known spectrum is a group from Denmark who are getting better with every release. It might have already happened some time ago, maybe between the releases of Konkylie and Infinity Pool, but When Saints Go Machine have become a truly special band. An energetic, wholesome and punchy performance at Rockefeller is more evidence than you need. Though they are not a band that relies on sheer volume as a big part of their shows, tonight it’s a case of the louder the better. And how impressively overwhelming it is. Watching singer Nikolaj Vonsild’s wiry frame writhe around whilst delivering his lines with the highest possible level of emotion is an intense and emotional experience. The set is essentially one prolonged highlight, but ‘Add Ends’ still has to be their finest single work. It mustn't be too much of an overstatement to say that they could still go onto far greater things. That's where the real excitement lies, anyway.

Though most of the artists here sing primarily in English, there are a few who do so in their mother tongue. This does not necessarily make them lost causes to the international audience, in fact it perhaps adds a degree of intrigue. It definitely helps to have a base level of quality, though. Someone who falls into this category is Bergen’s Vilde Tuv, who makes her rudimentary music – only vocals, bass drum and electric guitar – sound so enthralling that you might wonder if she’s a magician as well as a musician. Tuv’s cover of Kate Bush’s ‘Hounds of Love’ is not exactly ground breaking in itself, but with lyrics translated to Norwegian, it has a quality that few other attempts at the song have. It is also supremely raw. This is down as much to her voice as anything, which switches between delicate and piercing. It can be hushed and understated, yes, but there’s also great range there. Plus, the animated projections which sit behind her take away from the absolute minimalism and add to the show as a whole, not that anything really needs adding. It makes you realise that words are important but understanding them is not essential.


Similar things could be said of Kaja Gunnufsen, though her relationship with words and rhymes is a larger part of her appeal. The 6/6 Gaffa review of her debut album ends thusly: 'A street poet for 2014? Blindern’s Lena Dunham? An annoying girl who sings tweets? Judge for yourself. But the naïve voice of youth doesn’t get sharper than this.' Now, it is bad form to quote another review but the line about 'singing tweets' is incredibly astute. She definitely has plenty of charm, both during and in between songs. So much of it, in fact, that it is obvious even in Norwegian. Much like those rhymes. An acoustic in-store performance is all we get to see, but that’s enough to 'get' what Gunnufsen is all about. Innocently-sang, laid-back and nonchalant pop music is exactly what it is, by the way.

Atlanter: The music they make is not the most avant-garde, no, but if you are going to be a guitar-laden jam-based rock band with a penchant for guitar noodling, then you should at least make sure what you do is a) memorable and b) catchy. They succeed in both areas. ‘Tree Song’ is a major anthem, though there are plenty more in that category.

Sea Change: The top floor, rooftop venue of Stratos is a perfect fit for Sea Change. Pulsating synth-pop with a dark edge with heavier passages that are not a thousand miles away from Esben & The Witch. Certainly worth investigating their cold, ambient synth-based pop a little bit more.

Disa: “Ethereal” is one of those music journalism clichés but, much like “angular guitars”, you all know what it means. Herr Nilsen is a smallish bar/pub type place and the lights are perhaps brighter than ideal, but none of it is distracting enough to forget the slow-paced, multi-layered and ghostly melodies which rise above the electronic-laced peripheries. Enchanting.

Most informal award presentation ever:

The prize-giving ceremony for the Nordic Music Prize, now in its fourth year, was a strange affair this year. Previously it had been an event with at least a degree of pomp and ceremony, yet this year the entire process lasted about 10 minutes. The jury would have had a lot more deliberation on reaching a final decision, however. Last year’s winners First Aid Kit joined Swedish music journalist Andres Lokko on stage to present the award to The Knife for Shaking The Habitual, which defeated the likes of Jenny Hval, Múm, Iceage and Death Hawks to take the prize of 'Best Nordic Album 2013'. Except, of course, The Knife were not there to collect the award but, mercifully, their booking agent was. Perhaps they’ll get their booking agent to present the 2014 award? It’d make sense. Chalk one up for the legendary Nordic informality, in the extreme.