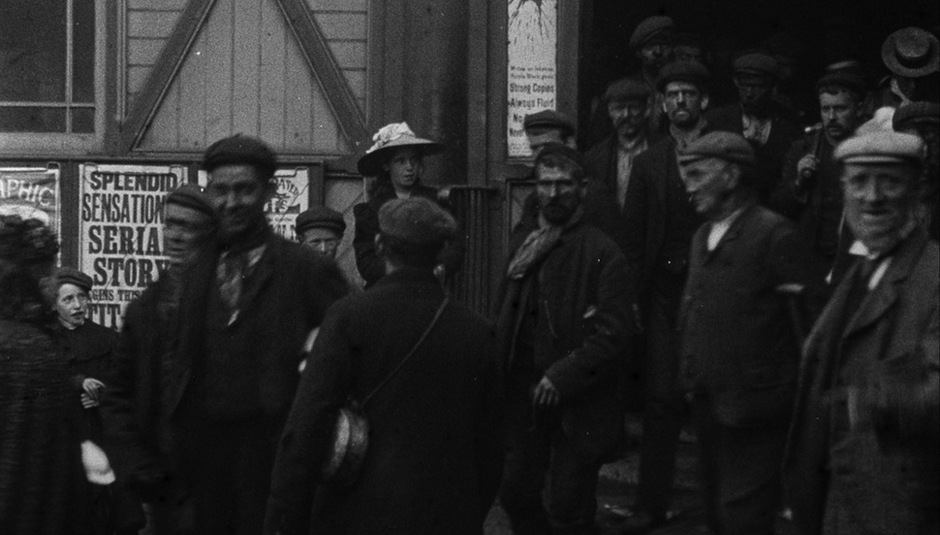 ‘There is no romance in the history of mining – only struggle’ said Newcastle-born playwright Lee Hall. And, within minutes of being ushered into a cramped mineshaft lift and lowered into the abyss in Bill Morrison’s film The Miners’ Hymns, you realise the brutal truth of this statement. During mining’s heyday, 1.2 million sons, fathers and brothers toiled in tunnels; a dangerous and exhausting job with little hope of reprieve, but with an unparalleled sense of pride.

It’s these generations of men, and the communities they called home that filmmaker Bill Morrison and composer Jóhann Jóhannsson have turned their focus to for this collaboration – a live-scored documentary film painstakingly excavated from nearly a century’s worth of archive footage from the likes of the BFI. Tonight it gets its London premiere, hundreds of miles and decades in time from the coalfields it depicts.

Looming out of the North Sea haze, the film is bookended by two extended aerial shots of former colliery sites near Durham, now bastions of multi-million pound consumerism – an Asda superstore and Premier League Sunderland FC’s Stadium of Light respectively. As haunting droned electronics rumble and brass shivers, the camera soars over mile upon mile of former industrial heartland, communities fragmented by the landscape scars of abandoned collieries.

The cinematography is hard to fault, cleaved from the clips’ original context as public information films and arranged into a broad narrative exploring the dangerous work of mining deep under the earth, the local community living in endless rows of soot-coated terraced housing under ashen skies, and the strikes and eventual closure of the mines. Given such sensitive historical subject-matter, it’d be easy to stray into the realm of the sentimental and romantic, but Morrison’s approach is measured: two of the most striking images in the film are a gang of grubby boys playing Cowboys and Indians on a precarious coal-pile, and a knackered nag of a pit-pony being laden with waste coal, scavenged from a desolate beach.

Jóhannsson’s brass-heavy contemporary classical score is - on the whole - bludgeoningly minimal and while variation is scarce, this limited musical scope fits the desolate subject matter: As we descend into the void of the mine in one of the opening scenes, the percussion echoes ominously and when pickaxes strike coalface in the most claustrophobic of crannies, sub-bass and distorted percussion rumbles rhythmically below the live orchestration. Occasionally the orchestra roars, a subterranean monster of fizzing brass.

Perhaps part of the poignancy of the performance is due to the orchestra themselves, half of whom are former members of colliery bands. Their presence lends an anchored perspective to the piece, a fitting tribute to their communities.

When Jóhannsson finally does open up the orchestral aperture towards the end of the piece, it’s truly euphoric – the climactic Miners procession to Durham cathedral is transformed into an emotion requiem for a dying industry, a proud procession of banners streaming down the cobbled streets towards the thousand year-old mass of stone and spires.

The Miners’ Hymns is a haunting and powerful portrait of the consequences of actions. Now, more than ever, we need works of art like this.