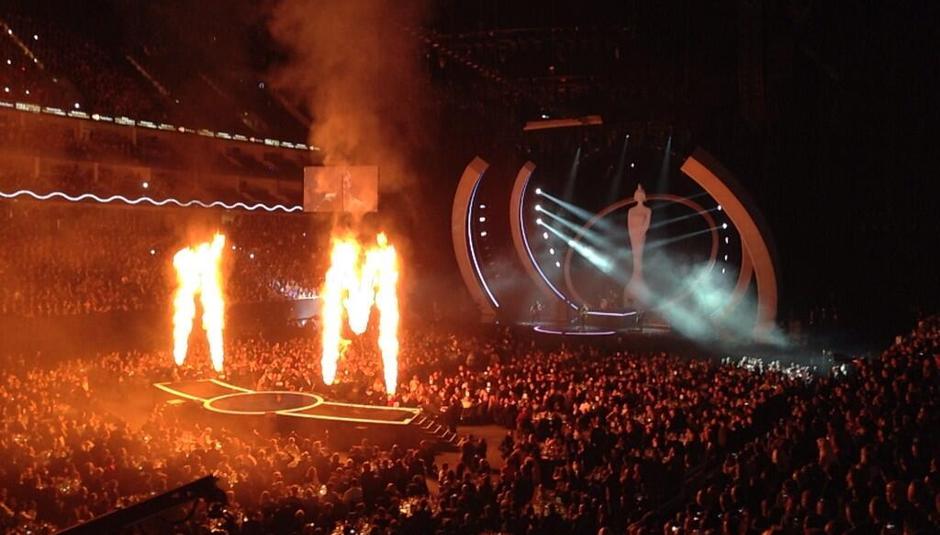 BRIT Awards 2014: It was a lot harder to hate the BRITs this year

BRIT Awards 2014: It was a lot harder to hate the BRITs this year

Our singles columnist and DiS does pop pen-man spent last night in The O2, tweeting as @drownedinsound. This morning he sat down with some tea and toast (not gin & juice?) and filed this summary of the biggest night of the year for the British music industry...

People really want to hate the BRIT Awards. The biggest story in the run up to yesterday's ceremony was a non-existent scandal. Barclaycard's PR agency was asking for tweets in exchange for travel to the show, a ticket and (presumably) a truck-load of free booze.

Imagine that! Taking hundreds of pounds worth of freebies and then being asked to pay your way for them in 140 characters. Those folk who came to report on the ceremony had their accreditation sorted by a different company and were under no such obligations.

Alas, Lorde had not been informed of the corporate sponsorship furore when reflecting on her International Female Solo Artist award. "It really was a #pricelesssurprise," she said before sauntering offstage, blissfully unaware of the embarrassment caused to her ‘outsider’ status.

That's the thing about the BRITs. They sit at the awkward intersection between art and commerce, where a prize for Global Success can be conjured up just to make sure One Direction have a trophy at the end of the night. And yet, David Bowie, Daft Punk and Arctic Monkeys reigned triumphant as part of the same evening.

But surely they were shoo-ins? Considering Ben Howard and Emeli Sandé swept the board last year, no diversions away from MOR normality could be taken for granted. Lest we forget, Guy-Manuel de Homem-Christo and Thomas Bangalter lent Panda Bear a place in the homes of 300,000 UK citizens. This sort of achievement isn't usually recognised on primetime ITV1.

To keep up appearances there were a slew of Top 40-inspired guest spots. Fresh from the Super Bowl halftime show Bruno Mars displayed his peculiar brand of Stevie-Wonder-meets-Bruce-Forsyth razzle dazzle, Ellie Goulding sang some very ordinary pop songs, and Beyoncé showed them both how it's done with a spellbinding rendition of 'XO'.

If it felt like there were more American stars on show than British ones, that's because Arctic Monkeys were the only UK-based act to perform with more than two albums to their name. Disclosure, Bastille and Rudimental were all given the chance to showcase their wares - albeit in the form of truncated mash-ups. A Suede or KLF moment wouldn't have gone amiss...

Last night felt like the first step in a carefully measured rebranding exercise for the BRITs. Most of the time, the right people won their awards. The general rule of this ceremony is that success rewards success, so John Grant never stood a chance against multi-platinum Bruno Mars.

Significantly, not everything was decided on sales. Having shifted 1.3 million units in the last year, it should have been John Newman who scooped British Male Solo over David Bowie. Instead Kate Moss read a plea against Scottish independence on the Thin White Duke's behalf. Then Alex Turner pontificated about how rock 'n' "will never die" to a sea of bemused faces.

Guitar heroes being arseholes, gongs going to deserved recipients and a Disclosure-Lorde collaboration that made us jump out of our seat in ecstasy! Maybe we got caught up in the moment, but it was a lot harder to hate the BRITs this year. Long may this trend continue.

Playlist: A Post-BRITs Playlist For Those of You Feeling a Bit Low About the State of British Music
Interview: John Grant on Timberlake, Bruno Mars and his BRITs 2014 nomination
DiS does Pop: What's the point of the BRITs?