DiS meets St. Vincent: "I think economy is a sign of development"

DiS meets St. Vincent: "I think economy is a sign of development"

The last time I spoke to Annie Clark, she was having some serious coffee trouble in New York. Stuck indoors, a victim of the polar vortex, she was in the middle of rehearsals for a short, promotional tour in advance of her self-titled fourth album, due for release on the 24th February – the same tour that has her sitting in front of me in an Amsterdam hotel lobby. It started two nights ago in Berlin, and after tonight it’s on to Brussels, Paris, and then the UK, these shows ostensibly serving as warm up dates before a long slog around the US and a return to Europe – and bigger venues – in early summer.

Almost a full year of commitments lies ahead – a daunting schedule made all the more so when you consider her claims to have taken only 36 hours off between the Love This Giant tour with David Byrne and sketching the songs that became St. Vincent – and she’s already started popping up in unlikely places (reading out a one star Amazon review of the Beatles’ Sgt. Pepper on Comedy Central and shooting a video of her impressive football skills for a teen magazine not being typical promotional activities). Perhaps this is why, despite the convivial hour, she appears distracted and weary, frequently staring into the middle distance and leaving some answers hanging mid-sentence. She’s also an intimidating presence; fiercely intelligent, her piercing eyes have a way of making you feel you’ve just asked the World’s Stupidest Question – in fairness, a not entirely unlikely scenario – before her clipped, considered responses make you wonder just how much she resents the endless rounds of press and enquiry that modern release schedules now entail.

As she leaves for soundcheck she apologises for being “fucking tired”, a state not in evidence when she struts on stage several hours later, totally transformed. One could surmise that she simply prefers to reserve every ounce of mental energy for performing and, after witnessing a 90-minute, 21 song master class, who could blame her? The show is, quite simply, stunning. Despite a drop in the number of hired hands from the Strange Mercy tour, the sound is more rounded, somehow fuller, and gone are the histrionics and stage diving. Neat, thoughtful little details stand out, like drummer Matt Johnson and keys maestro Daniel Mintseris being clad in white while multi-instrumentalist Toko Yasuda wears black, or Clark’s own choice of vintage Viktor & Rolf (information gleaned from her Twitter, not my keen eye for fashion). Dramatic lighting only adds to the sense of theatre, blinding strobes and icy blues giving way to warm pinks and hot flushes as each song dictates.

And, at the centre of it all stands Clark the guitarist, the consummate virtuoso. Possessed of a control and dexterity that’s a rare gift indeed, her wild solos puncture the songs like electric jolts. Some riffs are thick as sludge and drenched in distortion – reflecting her teenage musical loves of Pantera and Dimebag Darrell – while others are delicate and sprite. Clark and Yasuda frequently face off, eyes locked in concentration, and there’s plenty of robotic, choreographed dancing, the same stilted jerks and twists that feature so prominently in the videos for ‘Digital Witness’ and ‘Who’. Even several strange soliloquys, ruminating on how “I feel like we know each other already”, can’t derail the sense that we’re witnessing an artist at the peak of her powers, skilfully blending the past – ‘Cheerleader’, a touch slower than on record, is particularly majestic – with her best work yet. “People in their prime just make everything look effortless,” Clark told Pitchfork recently, and on this evidence, it’s a compliment she should start paying herself.

DiS: How did the first show go, in Berlin?

Annie Clark: Great, really great! I was so pleased that people seemed so pleased, 'cos it was music that was mostly new - I played almost all of the new record. So the fact that the first time people were hearing the songs, they were into them and dancing, was a very good sign.

It's becoming more common for artists to do short, promotional tours before their album is even released. Does it detract from the atmosphere at all when people don't know half the songs?

When people know the songs, they tend to be more effusive right off the bat, but I don't know. I think it’s good to do a little preview tour, because ultimately the best promotion for the album is the album itself.

When you get to the stage that you have a sizeable back catalogue, how difficult is it to choose a setlist?

Yeah, it's hard. I just followed my instinct on this one though; there are certain songs that were singles and whatnot that generally get a bigger reaction, but there's also songs that are really kinda rare, like a song I put out on 7 inch for Record Store Day a couple of years ago [Krokodil] - that's ended up being a live highlight. You have a lot of things going for you in a show because everybody's there to suspend their disbelief and you have a whole visual component that you don’t have when someone just puts on a record, so you have more leeway to create a world, and create a narrative, whether subconscious or conscious.

Does it change every night, depending on how each show goes and the reaction you're getting?

Absolutely, it's research and development for me. The band is...we're all really prepared, and we did a lot of rehearsals – it's a really amazing touring crew. My front of house guy is a real heavy hitter, the lighting lady is amazing...it's people who have done big tours and worked with some of my favourite bands, so in terms of production value, the show has really stepped up.

One of the things I like about the album is that the songs are very taut, and there's nothing that feels indulgent or grandiose. Does that kind of writing and recording discipline come with experience and confidence?

I think economy is a sign of development. That's the Hemmingway model, right? Ultimate economy. I didn't go that far, but the main thing is that a song has to have a heart to it. Once you have that be the criteria, anything that doesn't suit the needs of the narrative, or the soul of the song, just gets left out. And that's fine.

How easy is it to decide on that when you're in the studio? And do suggestions come mainly from yourself, or does John [Congleton, producer] make a lot of cuts as well?

Well, I demoed this album really extensively before I recorded it, so there were a lot of songs that ended up just basically as they were on the demo - obviously with much better sound quality, 'cos John is great with sound - but ‘Birth In Reverse’ was just there...’Rattlesnake’ was just there. Homer Steinweiss and Bobby Sparks came in and totally killed the rhythm section, but the song was written. I spent a lot of time songwriting before I went in to record, so the recording process was less about discovery and Frankenstein, and more about execution.

You mentioned Hemmingway - are you a fan?

Yeah, I'm a fan of Hemmingway, sure.

It's interesting that you are. You're reluctant to explain the meanings behind some of your lyrics, which can be vague and ambiguous, and that's kind of the polar opposite of Hemmingway's writing style. Do you think that keeping the mystery adds to the songs' character and depth?

Well, I think in some ways it's a little arrogant to step in after the fact, after people have an association with a song and it comes to mean something very specific to them and say "Oh no, you're wrong." I mean, the music is an offering, it's for everyone else after I'm done with it, after I've recorded it and put it out. These shows are about elevating the record even further, and creating another world and a suspension of disbelief. I would never want to step on someone's imagination toes if they have a very specific idea of what a song means to them.

I'm curious about different writing styles. I interviewed someone last week who goes in exactly the opposite way, whose approach is, and I quote, "to strip away all the poetry."

But there are a number of songs on this record that I would say are incredibly specific. Sometimes the universe just gives you freebies in terms of subject manner, and all you have to do is report the facts - a song like ‘Rattlesnake’, although it sounds like it's a new mythology, it's a literal story and all I had to do was report was happening. It's similar to ‘Prince Johnny’ - there are details in there, and it has a narrative and a pulse, but it's very specific. A lot of them are.

‘Digital Witness’ is a great song, and a fascinating topic. A common argument is that modern society's collective ADHD, and obsession with social media, has impacted on artists’ ability to grow and develop over several albums or years - it's all "What's new? What's hot?" Do you feel that too?

Yeah. Certainly in the 1970's, and the 80's too, people got the chance to make a number of records. Even Talking Heads didn't see things like radio support until maybe four or five records in, maybe? And they were a great band. But the other part of that too is that you didn't have to go out and tour as much, so you could basically put out a record almost every year - you'd do some touring, but not going to the far reaches of the earth every time in order to make a living, you know? It's tricky for bands because it takes a tremendous amount of human capital not just to make a record, but to put it out, tour it, get in the van, sleep on peoples couches, and do the whole thing. Especially when that might not sustain itself financially, at first - not everyone can stick it out. I don’t know, it's a tough one. It's a weird place to be, the music industry.

St Vincent will be released on February 24th via Caroline. 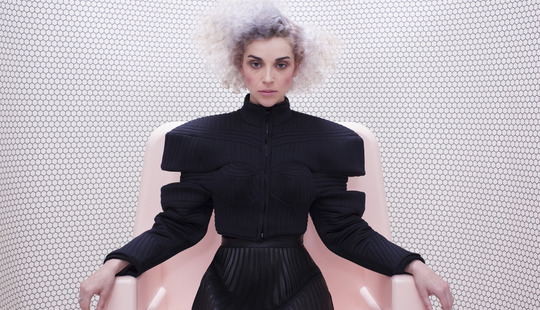 DiSsection: Johnny Foreigner You Can ...