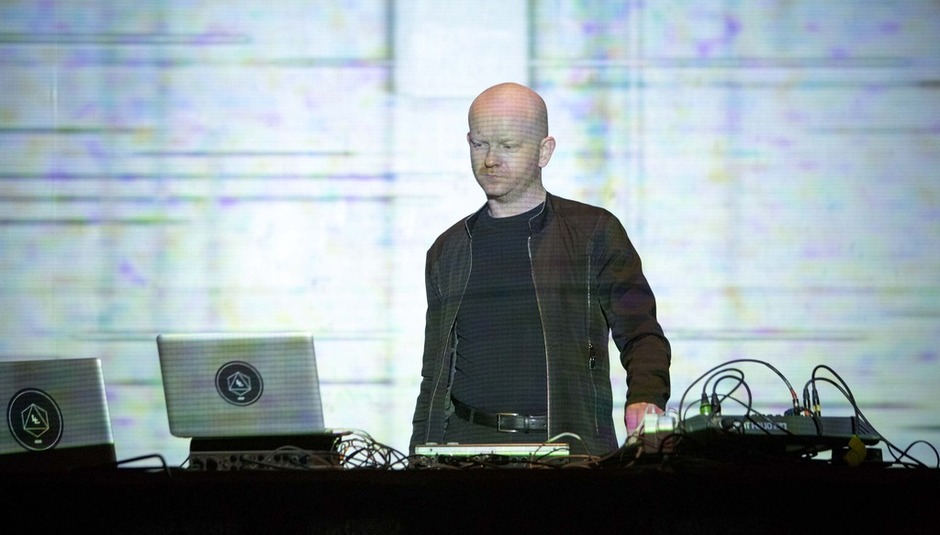 It’s the end of the first night and predictably us hacks are seeking out refreshment. After several libations in a mysterious, semi-hidden bar that resembles someone’s front room (the police pay a visit on the second night) we move on to Insólito, a long, thin strip of a room with a tiny, square dancefloor and a cavernous garden out the back. Drinks aren’t paid for immediately; instead, bingo cards are issued where what you order is simply marked down for later, a novelty that wears off the instant you start mentally replacing the multiple crosses with an actual monetary value. And despite pushing 3am, it’s quiet – surprisingly so. “Don’t worry,” chimes Tiago, one of the merry band of organisers who’s looking after the journalists. “We’re early. It’ll start filling up soon.”

But João Vaz is here. And, more than anything, João loves to dance. Careening around like an indie ballerina while the DJ’s drop an assortment of vaguely left-field alternative music – ‘Ice Cream’ by Battles being particularly well received – I’m told he’s a fixture in the local bars. It’d be easy to dismiss his madcap antics as those of a drunk or a fool but I’m curious; turns out his is an interesting backstory. A local by birth, he had been living in Cascais, a small town close to Lisbon, and dancing with a ballet company. Hampered by a back problem, he returned to Braga to recover among friends and family and with no other outlet for his obsession, started hitting the local watering holes and just…danced. Teetotal and oblivious to taunts and snide mockery, he exists in his own musical wonderland; lithe and with perfect poise, he whirls into action and spins round and round, lost in the music, a prisoner to his limbs. It’s as if the music is plugged straight into his nerves and coursing through his veins, so at one and responsive are his movements.

I contemplate this physical interaction between mind, body and music the following night while watching The Haxan Cloak deliver an hour long set full of haunting atmospherics and aggressive drones. It builds to a climax that’s actually painful to listen to; ear-piercingly shrill yet bone-shakingly low, it has many urgently stuffing fingers in their ears, the refrain slowly fading out leaving nothing but a few moments of tinnitus. It’s gloriously engaging, a full-on physical and aural assault, but there’s a paradox; sat in plush, red velvet seats, in one of the most stunning, opulent theatres I’ve ever seen, it’s a predominantly passive experience. That primal link, the invisible umbilical cord that allows João to spin and dance and makes live music such a thrill has been cut, leaving everyone as a still, silent witness. Nobody talks, nobody pops out to the bar, and nobody holds a smartphone in the air. This takes some getting used to.

It’s the exact opposite of how most people experience live, contemporary music, particularly at a festival; instead we’re a captive audience, compliant hostages to the whims of those on stage and denied the chance to interact in any way. Even applause is impossible, almost every set being a continuous, hour-long journey bookended by brief moments of adulation. With only eight acts scheduled, it’s not really a festival in the normal sense at all, more a gathering of the curious and obsessive, here to experience first-hand some of the year’s more daring sonic innovators (alongside a few “classic” performances, more of which later). It holds a specialist appeal, true, but the sense of intimacy is a strength that becomes more pronounced as the weekend wears on; the short but beautifully curated line-up means there are no clashes and no excuse not to surrender yourself fully to the program. Semibreve is – at least for me – a voyage of discovery, full of surprises and delights, but then if there’s one thing I learn, it’s that this event is extremely good at confounding expectations.

Aside from the dark textures and deafening climax of The Haxan Cloak, Saturday’s other highlight is Forest Swords, the alter ego of Liverpudlian producer Matthew Barnes. With an accomplice on bass, tracks from his recent LP Engravings have more fizz and sparkle, particularly ‘Irby Tremor’ and ‘Thor’s Stone’, the latter possessed of a sweeping euphoria that swells and weaves for over five minutes. It’s neatly balanced by the icy calm of ‘Onward’, whose hypnotic, repetitive chug provokes a trance-like state. Raime achieve something similar on Friday, intricate details swimming in and out of a swirling mass of sub-bass and shadowy drones. Oppressive yet dynamic, their set is rendered all the more spectacular by the visuals projected onto a massive screen behind them; a high-definition, slow-motion, vaguely 3D montage with homo-erotic overtones that is jaw-droppingly beautiful and lends their set a cinematic quality.

Sunday night’s fare also makes heavy use of visual elements. German Uwe Schmidt, under the guise of Atom™, borrows heavily from krautrock forefathers Kraftwerk, although on songs like ‘Stop (Imperialist Pop)’ the homage – both visually and sonically – comes perilously close to full on plagiarism. Some also grumble about the message, and while lyrics such as “Fascist control / Thanks to rock’n’roll” seem a little reactionary, it’s a pulsating, driving menace, even if the synth tones and overall aesthetic have been beamed in straight from Computer World.

Sculpture follow straight after, and deliver perhaps the weekend’s most beguiling, technically intricate set; while Dan Hayhurst busies himself looping and manipulating actual strips of tape through all manner of equipment, animator Reuben Sutherland plays, and I quote, “a video zoetrope turntable, ‘DJ-ing’ with psychophonotropic picture discs which animate when filmed, beaming looping fragments of surreal, luridly coloured imagery into eyeballs and brains at 25 frames per second.” This proves far more engaging than the music (which at times lapses into a series of robotic bleeps), a spinning mash of pop art imagery and psychedelic swirls that’s like viewing Roy Lichtenstein through Ken Kesey’s LSD-addled eyes.

It would be churlish to label anything here “bad”; by it’s very nature, the music at Semibreve is challenging and difficult, and dismissing something simply because one fails to understand it is reductive in the extreme. That said, there are moments that fail to spark, perhaps an inevitable consequence of booking acts whose raison d’être is pushing the boundaries of what is possible (or can even be considered “music”). Helm is one example; Luke Younger’s set is a dense, sterile affair that lacks the focus present elsewhere, his limp soundscapes drifting along aimlessly. He’s not helped by a lack of visual accompaniment, or by playing in the smaller, basement auditorium, but it’s still a disappointment. So too is Philip Jeck + Lol Sargent, whose reconstruction of their seminal work ‘Vinyl Requiem’ – a 1993 performance consisting of the manual “playing” of 180 1950’s and 60’s record players – seems to consist (as far as I can tell) of a video of said event alongside some manipulation of the soundtrack. Engrossing it may be, but it’s hard to work out exactly what is going on or “live”, or even what we’re meant to take from it.

There’s similar bewilderment at Rafael Toral’s Space Collective 3. We’re told to expect a performance “full of unpredictability”, and they get that part right; sadly, it soon turns to incredulity at what we’re witnessing. Like a futuristic Jazz club, it’s perplexing and enigmatic, too much so for all but the most committed aficionado. The most Spinal Tap-esque moments of indulgence are provided by the “drummer”; as well as the comical yet deadly serious wielding of a gong, there’s a collective snort when he very deliberately decides he’s using the wrong tom for a one-note fill. It’s avant-garde pushed to the limits, and I struggle to find the merit – a shame as Toral is considered a pioneer in Portugal and an artist the organisers are clearly proud to have involved. It may be the low point, but it doesn’t matter; the musical world is all the richer for those who stubbornly plough their own path, and it’s refreshing to see a boutique event like Semibreve cater to outsiders and sonic adventurers.