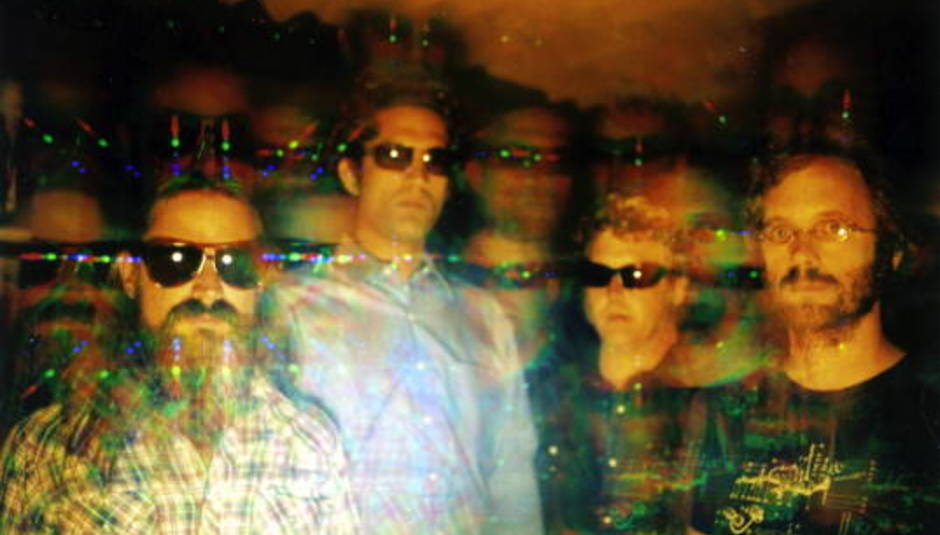 Having formed during the early part of 2006, Wooden Shjips could be classed as veterans of the psychedelic rock scene. The four-piece, comprised of Ripley Johnson (guitars/vocals), Dusty Jermier (bass), Nash Whalen (organ) and Omar Ahsanuddin (drums) came together through a love of bands like Suicide, Spacemen 3 and The Velvet Underground. Initially based in San Francisco, they put out their self-titled debut album the following year, sandwiched in between a host of singles and EPs released through various labels.

2009's follow-up Dos continued to build their growing reputation as one of the most intuitive bands on the US underground circuit, while third album West, released two years later, further highlighted their musical development. Since then, two of the band - singer/guitarist Johnson and drummer Ahsanuddin - have relocated to Portland, culminating in their latest long player Back To Land, released on Thrill Jockey earlier this month. A more mellow, song-based affair than the experimental looped grooves of its predecessors, Back To Land heralds the beginning of a new chapter for Wooden Shjips. Intrigued by the apparent change of direction, DiS caught up with affable frontman Johnson and discovered his approach to writing and recording has changed considerably since the band's early days.

DiS: Your new album Back To Land came out last week. Are you satisfied with how the record turned out? Would you say it is Wooden Shjips most definitive record to date?

Ripley Johnson: I'm really happy with it. I don't know about definitive, but it reflects where we're at now, or where I was coming from when we made it. The goal is always to just make an honest record, so it's successful by that measure.

DiS: The band's sound seems to have developed with each record from the raw energy of your early singles and self-titled debut through to the more refined sounds of West. Back To Land seems more song-based than its predecessors. Is that something you were consciously striving to achieve with this record?

Ripley Johnson: It's just something that I've been more interested in, and an aspect that we hadn't focused on as much in the past. I tend to just start writing, and as the process goes forward I will steer things one way or another. For this album I kind of let the songs dictate how the album would sound. In the past I was maybe more interested in letting the sounds dictate the form of the album.

DiS: In terms of the recording process, what did you do differently on Back To Land compared with its predecessors? Did you take a different approach to the songwriting for example?

Ripley Johnson: The approach wasn't that different but as I said, we just let the songs lead the way more. In the past I might have set aside some of the more mellow songs, like 'These Shadows' or 'Everybody Knows'. For this album I thought, what the hell, let's just add some acoustic guitar and bongos. I guess I was in a mellow mood. I was also listening to a lot of typical classic rock, like Creedence, Pink Floyd, the Faces, etc...

DiS: You've recently relocated to Portland. Did that play a part in influencing the sound and direction of the record? Is it a more settled environment to write and record compared to the hustle and bustle of San Francisco?

Ripley Johnson: It did play a part. I'm more settled there. I was basically without a proper home for a while, so moving into a house, unpacking all my old records, hunkering down for the winter, all of those things had a huge effect on my state of mind. I don't think of San Francisco as having a lot of hustle and bustle, but Portland is certainly more laid back. There are a lot of trees.

DiS: Of the songs on 'Back To Land', which is the oldest? It’s been two years since West came out. Were any of them written around the same period or are they all completely new?

Ripley Johnson: They're all new, written last winter. I generally don't like to dig up old songs.

DiS: You've spent a lot of the interim period recording and touring with Moon Duo. Is it difficult balancing the two acts? With both bands having achieved respectable levels of success, do you ever find time to have a break?

Ripley Johnson: It's not that hard. I think we have good separation between the two bands. I get breaks here and there, but I'm grateful for the opportunities to work. They won't always be there.

DiS: I'd imagine the writing and recording process to be a lot more complex with Wooden Shjips than it is with Moon Duo, for logistical reasons if nothing else. How do the songs come together? Who has the final say on what stays and what goes? Is it a purely democratic process?

Ripley Johnson: I wouldn't say it's complex. Basically I write the songs, record some very basic demos, then we get together and hash them out. If a song doesn't come together right away it might get tossed. I don't like to force it. Sometimes it's just not a good groove for the band. There's not a lot of discussion, we just feel it out as we go.

DiS: The psych rock scene has had something of a massive resurgence over the past few years, with both Wooden Shjips and Moon Duo at the forefront of its explosion. Are you comfortable being classified as part of a scene? Do you feel any kinship or commonality with other psych bands? Which bands in particular do you think are pushing the boundaries that bit further?

Ripley Johnson: I'm OK with it generally. I've always had a separate section of my records for psych music, for bands like Vermonster, Blue Cheer, Chrome, Comets On Fire, George Brigman, High Rise, etc..., so I could have easy access to it. I like being part of that tradition. As far as boundary pushing, I'm less interested in that than in personal vision. I'm into the auteur kind of thing. I'm impressed by bands who have an identifiable sound, like Sun Araw, Psychic Ills, Fabulous Diamonds, MV&EE and Comets on Fire.

DiS: You're over here in the UK for a handful of dates next month. What can we expect from the setlists? Will there be any surprises? Are there any songs from your back catalogue which you're not that comfortable about playing any more?

Ripley Johnson: We generally like to bring the rock, as we say, so the set will more than likely reflect that. It depends on the venue and atmosphere but more mellow songs tend to drop off the set list fairly quickly. I guess we'll see what the mood is when we play those places.

DiS: Do you prefer playing live or working in the studio?

Ripley Johnson: I like both but if forced I would choose the studio. It's where everything begins. I like the process of building up an album out of nothing.

DiS: 2013 has been an exceptional year for music. What have been your favourite records released in the last year?

Ripley Johnson: I'm not anywhere near my records so I'll probably miss a few but I liked new ones by Bill Orcutt, Thee Oh Sees, Kurt Vile and The Violators, Steve Gunn, Cave, Purling Hiss and Hellshovel.

DiS: What does the future hold for Wooden Shjips? Will there be any more tours or festival appearances next year?

Ripley Johnson: We have West Coast and Europe dates for the winter, then we'll be back over in the summer. Our booking agent Fitz is working on it now.