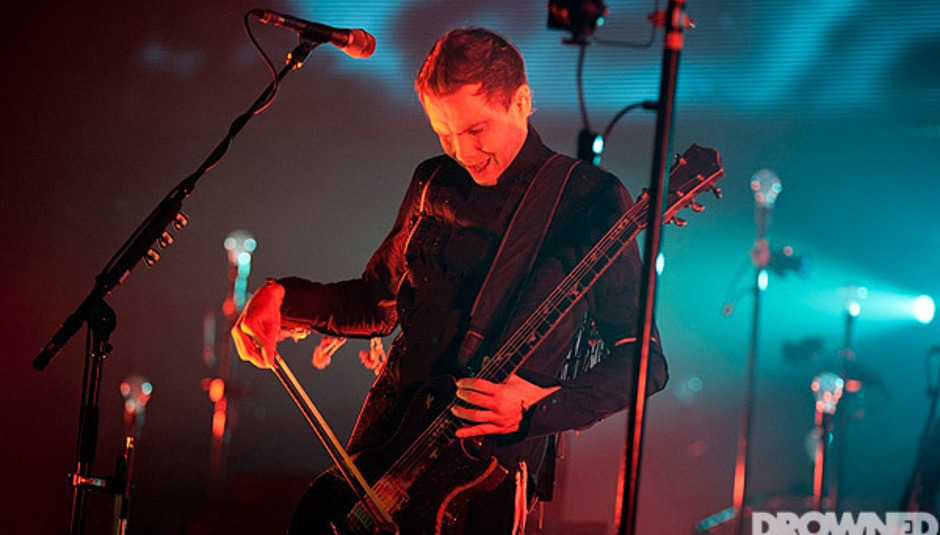 Having waited the best part of twenty years for Sigur Ros to visit my native city, the opportunity to finally see them grace a Nottingham stage wasn't one to be missed. Even if it meant spending an evening in the disconcertingly soulless confines of the Capital FM Arena. One long standing gripe for the city's gig going fraternity centres around the lack of a venue catering for bands too big for Rock City's main hall, yet not quite big enough for the cavernous Arena. Tonight's headliners fall into that category, and with seating tickets still remaining on the evening of the show, it's no surprise on entry to see the stage moved forward, reducing the venue's capacity by at least one third. Not that it makes an iota of difference to the quality of show those that have made the effort eventually witness, but it provides a plausible explanation as to why so many established artists seem to miss Nottingham off the touring circuit these days.

Before Jonsi Birgisson and co.'s arrival, it's left to Stockholm electrogazers I Break Horses to entertain those who've arrived early, which they pull off in exemplary fashion despite only being allotted a measly twenty-five minutes. Playing behind a curtain for the entire duration of their set might not make it the most visually enticing performance, although the silhouetted hand movements from singer Maria Linden during the most uplifting moments of their five-song set acts as a conducive spur in garnering a positive if not entirely rapturous response from the audience. Opening with three new songs from forthcoming long player Chiaroscuro might be considered a brave move under normal circumstances, but then to the majority of folks here this evening blissfully unaware of I Break Horses output every song is a new one. Of those, 'Denial' stands out with its darkly orchestrated synths and Linden's haunting vocal reminiscent of Diamanda Galas or Polica, depending which generation one originates from. It's the closing pair of 'Hearts' and 'Winter Beats' that raise the temperature though, both timely reminders of why I Break Horses 2011 debut was held in such high esteem.

That a forty-five minute wait ensues for Sigur Ros probably wouldn't be that bad if we didn't have to endure the sound of whale noises on loop from the moment I Break Horses departed until the headliners' appearance. However, twenty-five minutes later than scheduled, all is forgotten when a gorgeously executed 'Yfirborð' opens proceedings, aided and abetted by visuals that switch from 3D to cinematic backdrops. Drawing heavily from Kveikur, their seventh long player released earlier this year, tonight's set has a fiery, occasional visceral edge to it which songs like 'Brennistein', 'Rafstraumur' and the title track demand. Playing as an eleven-piece this evening, including added strings, brass and percussion, not to mention the exquisite vocal harmonies performed by each and every member at various segments of the show, there's no doubt Sigur Ros have rekindled their appetite as a live force compared to the shows in support of 2008's Með suð í eyrum við spilum endalaust (which threatened to break-up the band at one point). Indeed, the lack of material aired at this and the many other shows of a tour that effectively commenced in March would suggest that record has already found its way into the vaults for posterity alongside debut long player Von.

Unsurprisingly, the biggest cheers of the evening were reserved for 'Hoppípolla', arguably their best known song especially for casual observers. Like the ones stood beside me, who whoop and clap repeatedly at the song's quiet midpoint breakdown, blissfully unaware that a sudden build-up is seconds away to continue the song for another three minutes or more. It's on the material from 2002's () (or "Untitled" record as it's come to be known) that Sigur Ros playfully elevate themselves to the next level. The swooning grace of 'Untitled #2', Birgisson playing his guitar furiously, e-bow in hand proves delectable, while a closing fifteen minutes long version of 'Untitled #8' during the encore that takes them over their curfew time would be the highlight of anyone's set were it not for the impeccable run through Ágætis byrjun's 'Svefn-g-englar' that precedes it. Every single song gloriously executed from start to finish, while even the sound in the normally hit-and-miss Arena is pristine tonight save for one or two moments of inopportune feedback.

As the band return to the stage, all eleven players linking hands to take one final bow which signifies the end of the show, a large message appears on the screen at the back of the stage which simply reads "Takk". Thank You Sigur Ros, the pleasure really was all ours.