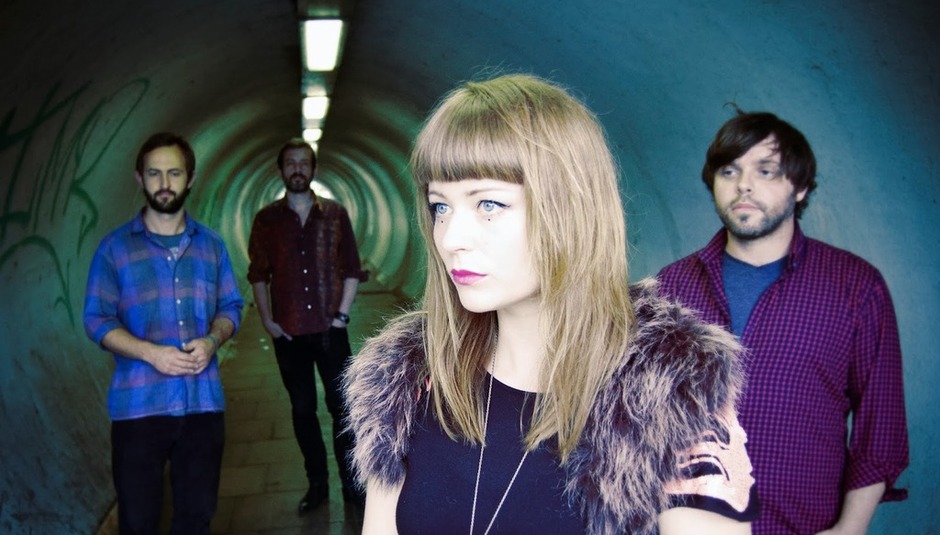 It’s been one hell of a year for Bristol. In my humble opinion, I think that 2013 has been one of the city’s strongest years in terms of releases, shows and new bands. The indie labels born and bred in Bristol have flourished – creating a whole family hell-bent on squeezing the best out of the city. I’ve witnessed some of my favourite shows ever in the past few months and it’s been wonderful to see the likes of Figure 8 festival and Simple Things really coming into their own. With just over a month left until the end of the year, there’s still plenty of things going on and plenty of new releases arriving just in time for 2013.

Falling Stacks aren’t exactly new. They’ve been quietly gaining an avid following over the past two years, with two EP releases under their belt and a third released on November 11th. The three-piece have been described as everything from The Fall to Fugazi, but generalisations aside their disjointed and experimental outputs are something to pay attention to. Here, the brilliant Bristol based Hankins films (https://www.facebook.com/hankinfilms) have created this weird and wonderful video for their new single ‘White Wild Hare’, which will feature on the new EP.

I had the pleasure of first witnessing Expensive when they supported The Pictish Trail a few months ago but the three-piece have been together for a little over a year now. It would seem I’m really late to the party with these guys because I instantly fell for their mix of electronic, R&B pop – genres which they have completely transformed to become their own. Made up of Matthew Cheney, Pete Shadbolt and Grace Denton, their stage presence is adorably addictive with enough sass from Denton to get even the shyest of audience members tapping their feet.

Forming in late 2012, These Colours have been quietly gaining the attention of gig-goers with a number of headline slots at the likes of Dot to Dot, as well as a few impressive support slots with The Blue Aeroplanes and McDowell. Their post-punk influence is undeniable – channeling the vocals of early Robert Smith whilst showcasing a kind of anti-poetry that could only be likened to The Clash. The five-piece are one of the best breakthrough acts in Bristol during 2013, which means that 2014 can only hold great things for them.

Emp!re are one of the hardest working bands in Bristol and an experience you can only appreciate once you’ve witnessed them live. Launching their debut album on October 19th at the Louisiana saw all their hard work pay off, with a show-stopping performance that proved just why they’ve been getting so much attention. The lead vocals from Joe Green are unfathomable in their range and strength, whilst the rest of the band is as tight as ever. There’s no denying their faultless song structure and addictive, melodic choruses.

Since the release of his 2010 debut album ‘Anieda’ on Punch Drunk, Bristol based producer Guido has been hailed as one of the forerunners in the post-dub step scene. Along with Joker and Gemmy, they make up the ‘purple trinity’ of Bristol’s dub step scene that brought the city to the forefront of the underground dance happenings in 2009. On November 4th, he released his follow-up, ‘Moods of Future Joy’ on a fellow Bristol label – Tectonic Recordings. Featuring a whole host of guest appearances and playful executions, Guido looks set to shake the city up once again.

Something Anorak only moved to Bristol a little over a year ago and in that time, he’s released 3 EPs via Bandcamp from the comfort of his own bedroom. This latest release ‘Vacation’ sees him at his best – channeling the fragility of Sparklehorse and producing the kind of lo-fi pop that puts his brilliant lyricism to the forefront of the listening experience. Whilst he’s yet to play many shows in the city, this EP showcases his ability to enrich your ears with a kind of brutal sensitivity that will make your hairs stand on end.

Since the release of 2012’s triumphant ‘Gymnophoria’ EP, Velcro Hooks haven’t stopped to catch their breath. Easily one of the best live bands in the city, their performances always leave you sweaty, cotton-mouthed and gagging for more. The four-piece are currently busy readying their debut album on Howling Owl Records set for release in early 2014 but in the meantime, they’ve treated us to another stellar offering. Live favourite ‘Galaxy Police Club’ and new track ‘Tickle Me Sick’ were released on 100 limited edition 7” on November 11th with some ‘special shit’ Howling Owl haven’t quite decided on yet. Their ability to write dizzying, sing-a-long belters one after another makes this an album worth waiting for but I for one, cannot wait. Bring on 2014.

Invada Records have had quite a year themselves – producing some of the most exciting new talents and releasing some select film soundtracks on gorgeous, coloured vinyl. The Fauns (pictured, above) have gone from strength-to-strength this year with their mix of addictive, woozy shoe-gaze and almost angelic vocals from lead singer Alison. Their second album ‘Lights’ will be released on December 2nd and this taster from lead single ‘In Flames’ proves that the five-piece have only got better with age. Having recently been played listed on BBC 6Music, it’s only a matter of time before the world find out about one of Bristol’s favourites.

I don’t know much about Daniela Dinosaurs – she seems to have crept up out of nowhere with her abrupt, in-your-face grunge that’ll only leave you wanting more. Her new EP ‘Going Native’ is set to be released on bulb in the next few weeks and features 6 tracks that are well-worth your time. Let’s hope Daniela Dinosaurs relishes in her talent and decides to play some shows in the new year.

Bristol four-piece favourites Empty Pools finally released their debut album ‘Saturn Reruns’ on November 4th, with an accompanying album launch show at Rise records. Pulling together everything that’s made this city love them, the album is a truly accomplished effort. Showcasing their ever-present scuzzy-grunge undertones with the compelling lead vocals from Leah Pritchard, their melodic song structures and under-the-skin bass lines have ensured ‘Saturn Reruns’ will be a breakthrough release.

Colston Hall has well and truly solidified itself as one of the best venues in the city over the past few months and with that comes a whole host of exciting shows to look forward to. Bristol five-piece The Bronze Medal have been described as the ‘masters of indie slow-build’, with their affecting offerings and heart wrenching vocals. Teaming haunting guitars and reverb-fuelled structures, the band will play their debut album in full for the first time on November 30th. Support comes from Bath-based Pylo and Gloucestershire’s Andrew Oliveri.

This brutal five-piece have been around since 2009, gaining our attention through their impressive live shows and forming an avid following. Their debut album has been a long time coming after sharing stages with the likes of Fearless Vampire Killers and The Dead Lay Waiting. 2011’s EP ‘Dead Man’s Waltz’ proved the band to be at the top of their game and now their crowd-funded debut album ‘Among the Damned’ will showcase everything they’ve worked towards. The album launch will take place on November 28th at The Exchange with support from When We Were Wolves and Koshiro.

Oxygen Thief was once just Barry Dolan but now, Dolan has managed to wrangle himself some new recruits – forming a full band. They’ve been snapped up by Xtra Mile Recordings – who have previously worked with Frank Turner and Reuben – to release their first mini album. ‘Accidents do not happen, they are caused’ will be released on December 9th and to celebrate, the band are playing at The Louisiana on November 30th to showcase all their hard work.

Rise have had some incredible in-stores this year – nabbing some of the most exciting acts from around the world. Transforming their downstairs area in a café/gig venue was the best thing they ever did and has hosted the likes of Daughter, Edwyn Collins, Sweet Baboo, Phosphorescent, Julia Holter and Laura Veirs. The atmosphere during these intimate live shows is hard to match, bringing together music lovers from across the city for many a mid-week treat. December 8th sees one of their best bookings yet and their album of the year – Factory Floor. To get a wristband for the show, simply purchase the album!

Bristol’s music centric community Audiophiles have always made it their job to spread the word and discuss new and exciting music in the city. Hosting Q&A’s and an endless array of live events as well as discounted tickets for a number of gigs, they’re a group worth noting. Their end of year party is never one to be missed and this year’s line-up is as jam-packed as ever. Featuring Seasfire, These Colours, Evil Twin and Ivor Wilsen it’s as eclectic as it is enticing.

Album of the year

So, I’m sure you’re all desperate to know what my album of 2013 is and if you’ve kept up to date with any of my columns, then I’m pretty sure you might already have an idea. So – drum rolls etc – the gong goes to my fellow Bristol-dweller Mr. Oliver Wilde. As soon as ‘A Brief Introduction to Unnatural Lightyears’ came into my life on July 22nd, I instantly fell in love with it – hook, line and sinker. To quote my very own review, “so rich in its output yet so sparing of frills and over-production, Wilde has managed to produce an album that will stand out from any genre whilst still maintaining a clear structure. Original and affecting, it's the lyrical honesty and experimentation with an array of hypnotic soundscapes that not only make this one of the most exciting debuts to come out of Bristol in a while, but one that deserves the attention of anyone that likes the sound of swooping, indie downer-pop with a melancholic euphoria”. It’s truly a masterpiece.

You can order his latest single ‘Stomach Full of Cats’ on limited edition tape and zine over on Howling Owl.

“I need to strip everything down, bec...