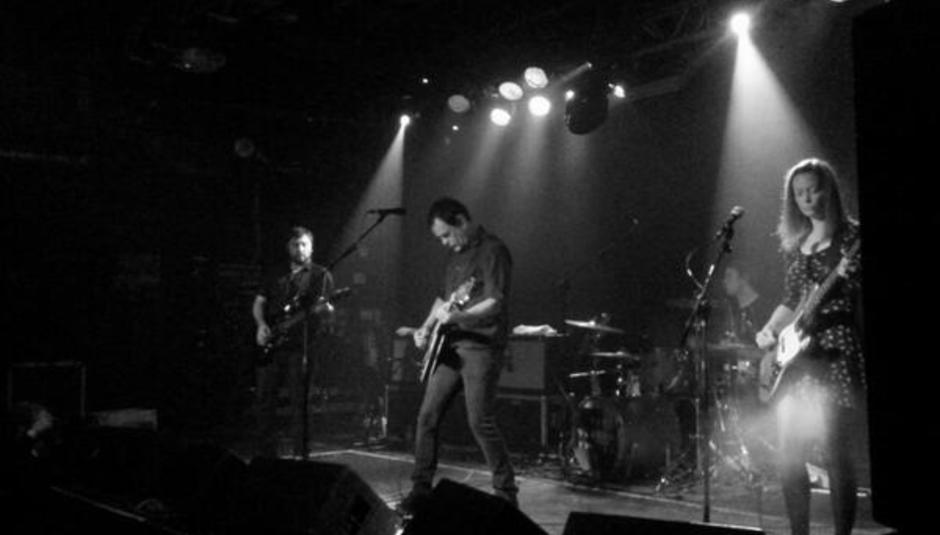 Live Review: The Wedding Present at the Roadmender, Northampton, 1/11/2013

“Northampton on a Thursday night: we’re living the dream.” The Wedding Present frontman David Gedge is a brave man, taking the sardonic approach with the tight black t-shirts, the ruddy faces and the bald heads of this writer’s provincial home town. Despite being the UK’s largest town (or at least one of several claimants to the title), Northampton itself is, as ever, close to empty on a week night and the beery crowd was presumably huddled inside some terrible pub or other before making their way through a cold, wet and dank cliché of a town straight to the gig.

Back in the heady days of 1992 The Wedding Present broke Elvis’s record for the most Top 30 chart singles in a 12-month period. The feeling as the crowd began to filter in was that here, in the town where the concept of newness stopped a good decade or so ago, they wanted the hits to be paraded out and none of this “album tracks” bullshit. When the band opened with two songs from the mid-2000s era – Take Fountain single ‘Interstate 5’ and the even lesser-known album track ‘Spiderman on Hollywood’ from 2008’s El Rey – the crowd felt restless and disengaged, an unfair but unsurprising sense of “the fook is this?”

Before all this a disappointingly tiny crowd of early arrivals got to witness a soaring set from Tokyo shoegaze/post punk quartet Taffy. I’ll admit to not being familiar with their music before the show, having missed them on their UK tour last year, but their understated melodies buried beneath glorious waves of drones and reverb create a sound that’s somewhere between MBV and early Manics. Regular DiS readers will therefore be unsurprised to discover that Dom Gourlay is a fan, and it’s well worth reading his interview with the band before checking out their excellent new album Train, from which much of tonight’s set was taken.

After an early run through than blended tracks from later albums with hits ‘Brassneck’ and ‘Fidelio’, the main act gave us the now-obligatory and coolly received Velvet Underground cover (‘She’s My Best Friend’) followed by new song ‘Two Bridges’, which carries on in the less-punkish mould of 2012 album Valentia. New bass player Katharine Wallinger – niece of World Party frontman Kurt Wallinger, we later discover – is in fine fettle throughout, although after a few early songs Gedge needs his microphone turning up as he’s being drowned out.

From here though it’s strictly crowd-pleasing: the ‘A’ sides from the two Hit Parade compilations played through in chronological order. As the set progresses the band gets louder, the feedback from Gedge and recent addition Patrick Alexander’s guitars more prolonged and intense, until by the second half of the Hit Parade run-through the crowd is less laddish mosh pit than captivated dancers. This being the 18th different line-up The Wedding Present has showcased, the personnel changes are as seamless as you would expect from a band so accustomed to them by now. The hits – the two albums are compilations of the ‘A’ and ‘B’ side singles the band released each month in 1992 – are thus reeled off with aplomb, from January’s ‘Blue Eyes’ through to December’s ‘No Christmas’.

After a shaky start the songs, now injected with furious punkish energy, are more enveloping live than on record, and allow the band to go out on a high with the closing duo of ‘My Favourite Dress’ and ‘Pleasant Valley Sunday’. It’s the best Thursday night in Northampton I can remember.