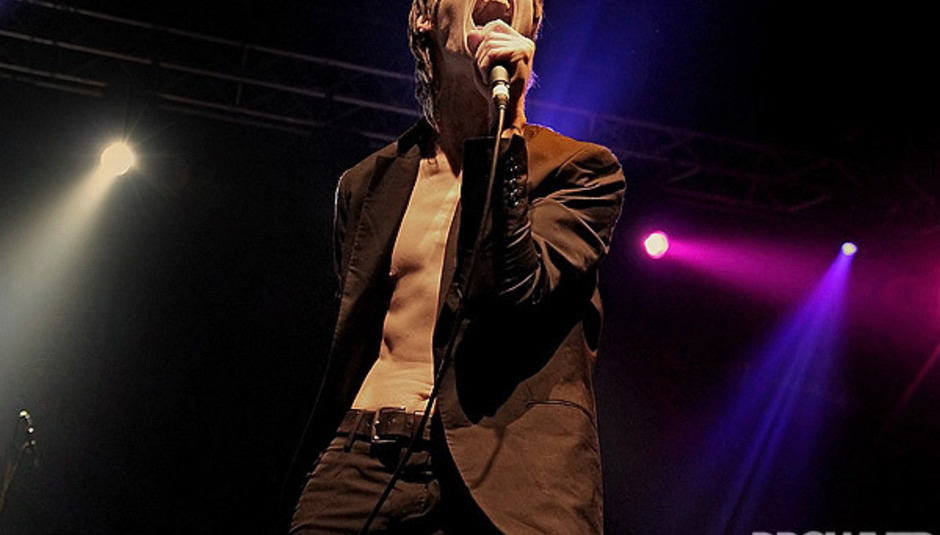 Since some time in the late ‘90s The Icarus Line have been trouncing stages, thrilling audiences, and spitting out album after album of disaffected, jacket-clad rock ‘n’ roll fury. Their latest long-player, Slave Vows, captures them sounding as vital as before: strutting, sweating, and snarling in a way that exposes almost every younger band around them as herbal-tea-sniffing, bowtie-necked Walter The Softy-types. Not that The Icarus Line are that old, as Joe Cardamone will point out to us.

On the eve of the band’s latest UK tour, we caught up with the group’s frontman/kingpin/all-round rabble-rouser to talk age, anger, art, and people named Herman...

How would you describe The Icarus Line to somebody who’d never heard your music?

How would you describe your own face? We are a loud rock ‘n’ throb group that has embraced chaos and named it.

The Icarus Line often looked and sounded (and sometimes behaved) self-destructively nihilistic, yet here you are still going strong, with five albums under your belts. How do you account for your longevity and are you surprised by it?

I would probably attribute the iron-will mindset to the fact that we actually love doing this music and that life has offered no greater avenue for any of us to become more complete. I’m not surprised that we continue to make music but if I ever think about some of the climates we have been exposed to or were self-inflicted then sometimes I feel lucky to be alive. That really helps one to not take the small victories for granted.

Have you reached the level of a “rock ‘n’ roll survivor” (whatever that means) or even “elder statesman”?

I don’t know if that is a question for me to answer. None of us are really that old, you know? All around the ages of 34. Having said that, we started making this a regular thing at a very young age. The Icarus Line has been around for about 15 years now.

Do younger bands come to you for advice? If so, what advice do you give them?

Yes, since I spend more and more of my time off the road producing records in my studio, I am often in the position to offer whatever crap wisdom I may carry around. Mostly I would advise them to decide if they have anything to offer the world artistically. Are you filling a void or are you just an ape? If they decide that they in fact do have a point of view that can push the boulder up the mountain then I tell them to be as self-sufficient as possible. Making your own path can build a platform that is impossible for anyone but yourself to destroy. Write as much as possible to become better at it and to get out of your city to create a worth besides your immediate click. In essence do not wait to be discovered, if you are worth being discovered then get out there and you will be. The internet is not the answer.

It seems kinda unfair that some of your late-‘90s/early-‘00s contemporaries who split up because they couldn’t hack the pressure have been reforming for big dollars while other groups such as yours are denied such accolades because you kept on rolling, grafting and creating. How do you feel about this retromanic reformation culture that rewards surrender and punishes perseverance?

Life isn’t fair now is it? I guess resurrecting a dead brand is exciting to people who want a warm blanket. Good for them. I live in a world of cold constant reality so it makes sense to me to document that through music. I’m not trying to hate on the bands playing dated catalogs to cash in, as long as they spread that momentum around. I have yet to see much of that. I haven’t seen any of the big reunions by our contemporaries. At The Drive-In and Refused have popped back to the surface but to me those tunes don’t hold anything current. I guess both those groups had a huge impact on suburban white kids and spawned a million terrible bands. I guess it might seem like an easy paycheck or a way to mend fences with past disputes. I know I would never wanna play a song off Mono ever again as long as I live, so to me going backwards has never been an option.

In a recent interview with LA Record you mentioned “the few instances that I’ve compromised for money or for pleasing other people and the few times I’ve ever done it I was like, ‘Oh, this is pointless’”. Could you give us any specific examples?

These wouldn’t be massive instances. Perhaps we took a support slot on a tour we wouldn’t have except we were pressured by a record company or whomever.

Do you completely regret such instances or value them as lessons learned?

There’s really never a reason to regret anything. There’s one manager who I fired years ago because we just had an unhealthy relationship and one of us was going to croak if we continued down the path we were headed. It had to be done but I miss his input and support.

Looking back at your entire discography, which Icarus Line tracks are you most proud of having created?

Like always I will have to say the most current material is what I’m feeling but honestly I never listen to my records after I’m done making them. I am proudest while creating something new.

On record, on stage, and in interviews you often come across as quite an angry man, Joe. Where does all this anger come from?

What would have to change (personally/globally/politically/culturally/whatever-ly) to make you more of a happy chappy?

A year without a complete disaster would be great.

What’s the most embarrassing item or guiltiest pleasure in your record collection?

Probably Stone Temple Pilots’ Tiny Music. I love the production on that record for some reason and every time it comes on it just sounds good. Brendan O’Brien has a great way of taking really average bands and making them seem like the real deal, even if it’s only for a brief moments. I remember seeing them record the drum tracks outdoors when I was a kid and thinking it was cool-looking.

The storming, deafening new record Slave Vows has attracted heaps of glowing reviews? Do you read your reviews? Do they mean anything to you? How do you deal with them?

I have seen some of the reviews. I guess it’s nice to an extent when there’s a general consensus about your work saying it’s good. I feel like timing has more to do with it than anything. The world may need Slave Vows more now than it would a few years ago. There’s no shortage of hardship on this end so there’s no problem keeping perspective, that I can assure you.

Is there an over-arching lyrical theme to Slave Vows?

Yeah, I suppose so as with most of my work there are common themes. I feel like Slave Vows is part of a bigger picture that should unfold over the next few years. As we did the recording it felt like it was the beginning of something new. A break through to a forgotten frame of mind. There was a huge lightness associated with the writing of the record. Although thought and work was put into its creation there was also a fluidity to it. These tracks wrote themselves and the themes felt like checking in on subjects that have been mutating since I began singing about life and death.

There seems to be a Swans influence on some of Slave Vows’ tracks. What do Swans mean to you?

[Michael] Gira is one of the contemporaries that I respect a great deal. Nick [Cave] and Warren [Ellis] are others. These days I feel like there is a sound that has evolved out of the void. A sonic tendency that is being shaped by what the world feels like to true rock ‘n’ roll artists or whatever you wanna call us. Do I look towards people that even into their 50s and 60s create a brutally honest portrayal of their surroundings? Fuck yeah I do.

What can we expect at the UK live shows?

The most sound that six humans can squeeze out of their souls. Sonic baptism.

Are there any tracks you particularly relish playing live?

Everything on the new record has legs still and also ‘No Lord’ [from 2011’s Wildlife] is still mutating each time it’s played live.

How do you choose your setlists?

We try to play whatever material will provide us with the inspiration to give a great performance. Really that is the number one criteria. Beauty before age.

Do you get nervous before gigs?

Yes. There’s gotta be nerves or else you are obviously risking nothing on stage.

What kind of music do The Icarus Line listen to on the tour bus?

Alex Chilton’s Like Flies on Sherbet was on the other day. The Move’s last two records as well.

What will the next Icarus Line album sound like? Has work begun?

I can’t really speculate too much but initial whims point to a more distilled version of the last one, made in a similar way to Slave Vows. There are about 30-40 ideas that have been quickly committed to the voice recorder app on my phone. I will draw from those ideas and words that I constantly accumulate in normal life. We hope that over the holiday season we’ll be able to start producing a new LP. There’s also a full record of material that didn’t make it on to Slave Vows which should be released as a companion piece early next year.

Herman Melville once noted that, “What I feel most moved to write, that is banned, - it will not pay. Yet, altogether, write the other way I cannot.”Do you identify with Melville’s creative dilemma?

Who’s gonna argue with a man named Herman? Yeah, that says it all doesn’t it?

The Icarus Line are currently rocking their extended UK tour. Dates for the sonic baptism can be found here

The Wedding Present: “Northampton on ...