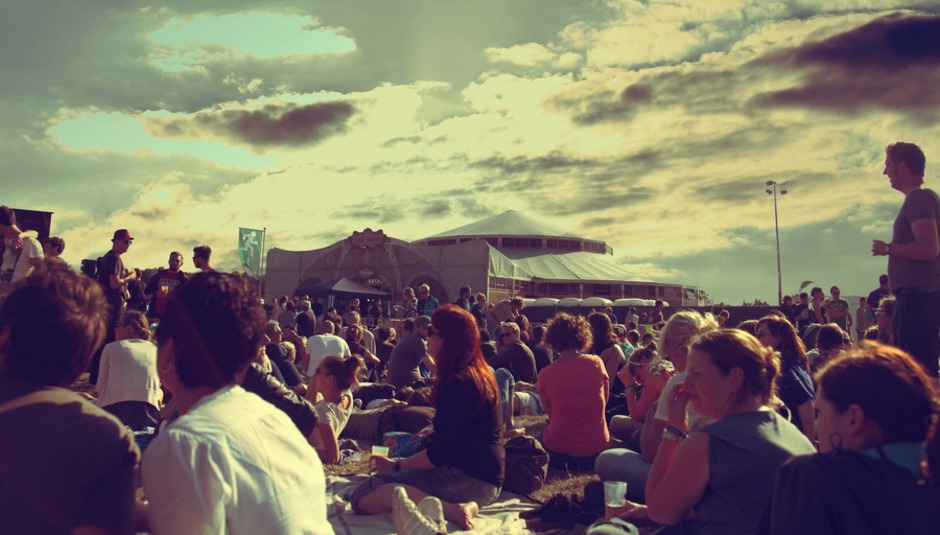 Welcome to the hippest little village in the North Rhine-Westphalia region. Haldern is home to a beautiful church, two functional supermarkets, a tavern highly skilled at the art of schnitzel - and, somewhat incongruously, a tiny music venue with walls covered in band posters. For a 100-capacity bar, it attracts pretty big acts - Frightened Rabbit played here a few months ago.

The bar belongs to the music festival that put this sleepy village on the map. When I initially contacted Stefan Reichmann to enquire about accreditation, I’d assumed he was merely the marketing guy. It turns out he pretty much is Haldern Pop. I saw him everywhere over the course of the weekend - overseeing the construction of the main stage, ensuring bands are getting fed properly, cycling the mile between the village and the festival site. The man doesn’t miss a trick. When I finally got a chance to chat to him after the festival, he filled me in on the first 30 years.

In 1984, Stefan and his friends stopped complaining about living in a boring village and took matters into their own hands - they established a cooperative and started a miniscule festival. The first edition only had three bands and even ten years later there were only six acts on the line-up. But by the end of the century Haldern was attracting up-and-coming international bands - Muse played in 1999 - and now it sells out in days every year, well before the first line-up announcement. The festival Reichmann started when he was barely out of his teens has come a long way, but it’s also stayed true to its roots.

The community is very involved - it’s their village festival, after all. I stayed in a converted trailer in a local family’s back garden. It’s one of the closest houses to the site and so they did their bit - their bathroom was full of booze for the bands. My room on wheels was surrounded by tents belonging to the family’s friends and their friends’ friends, the booziest bunch of twenty-somethings I’ve ever had the pleasure of meeting. Too many bands were missed due to 30 cent bottles of beer and our collective contemplation of the fine points of German culture - why a tiefspüler (toilet with direct drop) makes far less sense than a flachspüler (toilet with inspection shelf), why flunkyball (a drinking game involving balls thrown at empty bottles) should be an Olympic sport, why the beer bong is the ultimate time-saving device, and why German hip-hop is the pinnacle of artistic self-expression. These guys weren’t joking. They only left their beer mountain for the festival site once the entire weekend, to see comedy hip-hop duo Captain Peng & the Tentacles of Delphi.

Anyway, Stefan believes that Haldern Pop could double in size from its current 7,000-ish capacity and still sell out, but that it would kill the festival. His unwillingness to expand does create one problem, though. Many of the weekend’s best performances were in the Spiegeltent, a magnificent wood-and-canvas structure with a gorgeous interior of mirrors and stained glass. But it’s only big enough for around 1,000 people, meaning there was always a long line of festival-goers outside watching bands on a big screen. It’s not a situation you’d see repeated year upon year at a UK festival, but here nobody seemed to mind. They told me Haldern Pop is a necessary alternative to Germany’s large corporate festivals. It’s worth missing a few bands to keep it small and independent.

I was thankful for my access all areas pass when a fantastic Spiegeltent line-up on Thursday resulted in a huge queue. Julia Holter’s new album Loud City Song is extraordinary; beguiling and menacing, with an expansive yet claustrophobia-inducing sound. Here, accompanied by a saxophonist, cellist and violinist, she was able to capture the record’s foreboding mood and surprisingly successful mix of drone, jazz and cabaret. There was also something dark and disorientating about the bassy beats and sampled vocals of John Grant’s set openers ‘Pale Green Ghosts’ and ‘Black Belt’. His voice, as ever, was fantastic, and he won bonus points by bantering in fluent German. The highlight was ‘Glacier’, with its stirring, tumultuous instrumental finale.

Earlier in the day I’d been to Haldern’s nineteenth century St George’s Church for a religious experience. Lubomyr Melnyk introduced his concert with a sermon about how sound and music are miracles - and there is something genuinely astonishing about the waves of sound that emerge from his piano. His eccentric personal website claims he’s the fastest piano player in the world ('able to sustain speeds of over 19 notes per second in each hand simultaneously!'), which may or may not be true, but the drone-like effect of his ‘Continuous Piano’ technique has a transcendental effect - it washed right through me.

The Haldern Pop bar opened early on Friday for a lunchtime show from Ben Caplan, he of magnificent beard and coarse, weathered voice. The show started inauspiciously - he had to ask chatters at the bar to be quiet - but ended memorably with the Canadian standing on the edge of the windowsill facing Haldern’s main square and leading several hundred people through an a capella singalong. He didn’t need amplification - his voice probably carried to every house in the village. Over in the Spiegeltent that afternoon Sam Amidon played understated, restrained songs on guitar, fiddle and banjo; his distinctive voice is stark yet soothing. He was followed by Balthazar, a quintet from Belgium who raced through various musical styles in their short set - it didn’t always work but at their best they’re reminiscent of Of Monsters & Men and Local Natives.

The rest of Friday was solid if unspectacular. Allah-Las did their jangly, trebly, mid-tempo sixties thing; Connan Mockasin delivered woozily hypnotic psych-pop; Villagers excelled at anthemic folk with heart, and Lee Fields put on a hugely entertaining show in which he mostly sang about pretty women and how much he loves them, especially when it’s summer and they’re not wearing many clothes. Luckily for him, it was a sunny day and we were in Germany.

There was a long delay before the James set and when their fans at the front sat down 20 minutes after their scheduled start time, it was unclear whether it was a protest or an act of fandom. ‘Sit Down’ came towards the end of a set that reminded me how many great songs they’ve recorded - ‘Laid’, ‘Tomorrow’, ‘Come Home’ and ‘Sometimes’ appeared in quick succession and got the mass singalong response they deserved.

I’ve never seen Owen Pallett put on such a noisy, aggressive and intense show as his Friday night gig in the Spiegeltent. With the help of a bassist and drummer, he played and looped violin and keyboard to a dizzying effect. And Metz were truly ferocious. There’s nothing complicated about their music or poetic about their lyrics - it’s just furious, physical, unadulterated rock. The not-very-rock Haldern crowd loved it.

The singer-songwriter-centric Saturday line-up cried out for Metz-ish noise. Alabama Shakes and Local Natives added muscle to the main stage (the latter coped admirably with a mid-set power cut), but elsewhere it was a bit one-paced - after Half Moon Run, Glen Hansard, Denis Jones, Regina Spector and The Staves I was desperate for something less safe. Thankfully, Anna Von Hausswolff was on astonishing form. After 20 minutes of an intense prog-doom-goth-death-drone church organ jam, she opened her mouth. The Swedish musician's voice is an incredibly powerful weapon, partly because it’s so infrequently used. When it soars on songs such as ‘Liturgy Of Light’ and ‘Mountains Crave’, Kate Bush comparisons are inevitable but don’t do her band justice. I was reminded of artists as diverse as Earth, Tim Hecker and Diamanda Galas.

I struggled to warm to Efterklang's headlining slot so I sneaked into a rammed Spiegeltent for German comedy hip-hop heroes Captain Peng & the Tentacles of Delphi. I couldn’t reach my superfan friends at the front so was unable to get a translation, but I’m told it was all deeply ironic. I managed about ten minutes of Brandt Brauer Frick’s three-man techno juggernaut - it was brilliant and exactly what I’d craved all evening, but I couldn’t keep my eyes open.

By the time I woke up at noon on Sunday, my beer-swigging buddies had disappeared, the main stage had been dismantled, and the campsite was almost empty. The villagers hope to put on another festival next year.