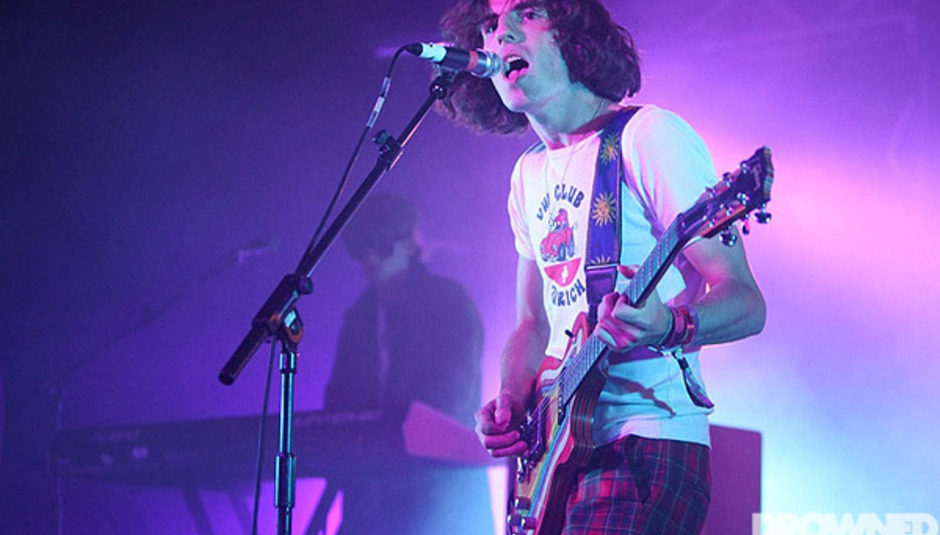 What a difference a year makes. Turn the clock back twelve months and all talk was about the so-called dearth of guitar bands, particularly here in the UK. Yet so far, 2013 has unearthed a host of incredible records created by acts predominantly in thrall to the traditional vocals/guitar/bass/drums set-up. Step forwards and take a bow Hookworms, Foals, Money, Girls Names, Neils Children, Joanna Gruesome, Exit Calm, These New Puritans, Veronica Falls and Swim Deep, to name just ten. Albeit not necessarily conventional, but nevertheless each and every one a glowing testament to the unprecedented wave of talent currently forcing the aforementioned doom mongers to choke on their words.

For tonight's headliners it's been a momentous nine months watching their upwardly projectile journey first hand. Having played (and sold out) the relatively intimate by comparison confines of the Bodega in February, the Rescue Rooms was the logical step-up for their next visit to Nottingham. Nevertheless, with a recession that doesn't seem to want to subside very soon and a common theme for the majority of UK summer festivals to feature the same line-ups like a rotating round robin hopping from pillow to post, it represented something of a gamble for a band whose star is still rising.

However, with last month's debut long player Where The Heaven Are We gatecrashing the official Top 20, and a string of impressive festival appearances behind them, confidence is sky high in the Swim Deep camp. Even as far back as that February night when DiS first spoke to them, front man Austin Williams laid down the gauntlet to any would-be detractors. "I don't see the point in doing something if everyone else around us is doing the same," obviously counteracting any suggestions they're jumping on the coattails of any media-perceived Birmingham (or B-Town) scene. In fact, when placed alongside fellow West Midlanders Peace's debut In Love, Where The Heaven Are We seems like a comparative breath of fresh air. Steeped in influences stretching over the past three decades, it still carries a unique inventiveness across its eleven tracks.

Nevertheless, it's the band's live show that's got people excited, and undoubtedly turned them onto their recorded artefacts in the first place. With energetic support band Wolf Alice entertaining those who've arrived early with a set referencing Pixies and Hole if occasionally lacking in the songs department, it's left to the headliners to demonstrate why they've emerged as one of the UK's bands most likely to gatecrash the big league next year. While the set is gleaned almost exclusively from Where The Heaven Are We - album bonus track 'Crush' and their cover of Cyndi Lauper's 'Girls Just Wanna Have Fun';already a hit at festivals this summer; being the exceptions - it's the way they manage to engage the audience from start to finish that sets them apart from many of their peers. Indeed, what Swim Deep possess in their armoury is the ability to write inventive, cohesive and ultimately catchy pop songs. Although the obvious focus lies with "the hits"; and understandably current re-release 'Honey' and 'She Changes The Weather' stand aloft as two of 2013's finest 45s; there's a barrel of riches at their disposal. Opener 'Fransisco' sets the scene impeccably as it does on the album, early 90s reference points colliding with a post-millennial ambivalence. 'Stray' too veers into similar territories, eerily reminiscent of Reading shoegazers Chapterhouse in places, dipping its toe in Mancunian waters elsewhere. All the time devoured by a gathering seemingly hellbent on relaying every word back at Williams and his four cohorts onstage.

Closer 'King City', the band's unashamed paean to Warpaint's bass player with its layered refrain rings loudly in the ears long after they've departed the venue. Even though this music malarkey should be treated as a marathon rather than a sprint, there's enough evidence over the course of this summer to suggest Swim Deep have gathered momentum somewhat. Bearing all of the above in mind, album number two promises to be a mouthwatering prospect. Expectation levels raised, here's hoping they deliver...