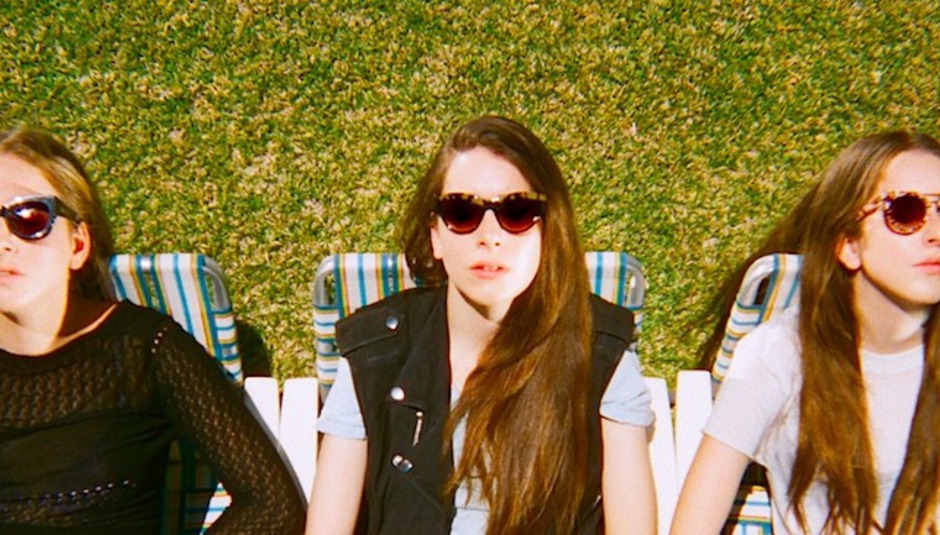 Hello. It's time for a brand new edition of DiS Does Singles. This week Britney, Justin Timberlake and Katy B all returned to the Top 40 fray with offerings of varying quality. If you've ever wondered what a rave-pop song might sound like if sung by the Tower of London Beefeaters, then 'Work Bitch' is the closest you'll ever get to that dream becoming a reality.

Elsewhere, Grizzly Bear got in the festive mood early by unleashing a new track from their expanded edition of Shields and Cass McCombs unveiled a gorgeous new song to the world. Plus, 2 Chainz continues his streak as the 'will this do' rapper of the moment.

Most importantly, Haim have the Single of the Week. Because, why wouldn't they?

This cartoon has a lot to answer for: Originally printed in punk fanzine Sideburns, it’s deluded generations of talentless chumps into thinking they too can form a band with only a rudimentary knowledge of how to play guitar. More significantly, it’s the reason why us British folk overhype young bands before they’ve had the chance to release their second single. It’s the cause of this: Without debating the merits of Haim over Palma Violets, the two bands are differentiated by a whole lot more than nationality. Palma Violets were reportedly signed to Rough Trade on the basis of one song and a series of gigs at Studio 180 in Lambeth, London. Haim, on the other hand, formed a five piece band called Rockenhaim with their parents when guitarist Alana was four years old. Lead singer Danielle has played as a touring musician with Jenny Lewis and Julian Casablancas, as well as performed in the tweenage outfit Valli Girls with bassist Este.

If Haim had been British and caught on YouTube chanting, “we conquer evil then go shopping”, the consequences would have been dire. A thousand manufactured pop vs indie think pieces would have been conjured up before the trio had the chance to ‘do a Brother’ and flee across the Atlantic to New York. Savages, Franz Ferdinand and Friendly Fires all started life in different guises, but their popularity runs counter to a tradition where the new ‘next big thing’ is a not so subtle reincarnation of the old ‘next big thing’. That being a scruffy gang of young upstarts with three chords and an irrepressible supply of bravado to hand.

These acts will never write a ‘The Wire’ because three-part harmonies and golden Californian chords are demonised by their heritage. They take more than an afternoon’s rehearsal to perfect and never sound quite right on a four-track demo.

I want more bands like Haim and more songs like ‘Forever’, ‘Don’t Save Me’ and ‘Go Slow’. Tracks with the arrogance to demand permanent squatting rights in your frontal lobe and the choruses to ensure you acquiesce.

‘The Wire’ just so happens to be one of these grand collisions of rhythm and melody. A break-up song with a twist, it sees each band member execute a summary execution of the heart strings using a brisk kiss off, “I know, I know, I know, I know that you're gonna be OK anyway.” It’s brutal stuff but, if the song is about you, at least you’ve been gifted a solid gold pop tune by means of compensation. Not only is this single a singalong romp, it’s lavished with intricate flourishes of musicianship. From finger clicks to wah-wah guitar, a huge amount of craft has been expended to ensure ‘The Wire’ is so much more than a Fleetwood Mac pastiche.

Of course, there’s room in the world for both libertine dreamers and West Coast family affairs. Time and time again, the scraggy punk revivalists have burnt through all their ideas in the space of a debut album. With ‘The Wire’, it feels like Haim are only just getting started.

To paraphrase Lemar: if there's any justice in the world, '5AM' will be a Number 1 single. Like all the best Katy B songs, it's about being in a club where the music sways in time with your romantic manoeuvres. At this early hour, the London-born songstress is on a mission to bring her evening to a worthy climax.

“I need somebody to calm me down, a little lovin’ valium,” she coos with warm intensity.

Where ‘What Love Is Made Of’ worked best as a piano ballad, ‘5AM’ is a banger through and through. It’s got a bassline that shudders through your bones and an obligatory house-themed bridge to boot. Whatever the bleary-eyed hour, you’d still throw your hands up in euphoria if a DJ dropped this tune.

It’s only September but Grizzly Bear are already vying for a place in your Christmas stocking with a special edition re-release of last year’s Shields. What’s on offer from this yuletide money-spinner? Well, alongside several remixes, you’ll also get to enjoy some ‘previously unheard’ demos.

‘Will Calls’ is the taster track that’s been offered up for your approval and a mighty fine morsel it is too. Swinging between abject silence and overwrought clatter, Ed Droste’s alto vocals lilt in a breeze of wistful synth before being swept up in a rush of bristle guitar. The results are more lo-fi than you’d expect from a Grizzly Bear song, but that’s the demo factor factor at play. An intriguing glimpse at what might have been for Shields.

As a will.i.am-produced raveathon, there’s not an ounce of subtlety attached to the song’s four minute frame. That said, Mrs. Spears seems to relish her role as a High Priestess of excess, doling out a singular life lesson for those who want to amass immoral quantities of filthy lucre.

“You wanna hot body? You want a Bugatti? You wanna Maseratti? You better work bitch.”

Having been trumped by Katy Perry for girl next door appeal and Rihanna for A-list collaborators, it’s as though the ‘Gimme More’ hitmaker has decided unmitigated attention-seeking is the only game left in town. In this arena at least, she can still teach her contemporaries a thing or two.

If you followed our advice last week, you’ll already be familiar with Cass McCombs. If not, consider ‘Brighter!’ to be a final, polite nudge towards toward his alt-country brilliance.

A reunion of the duo that bestowed the world with ‘Dream Come True Girl’, it sees Karen Black take up lonesome vocal duties while McCombs fidgets with a pedal steel guitar. This world-weary combination is all the more poignant given Black succumbed to the loathsome clutches of cancer last month. Hearing her crack a smile in the direction of her collaborator, “brighter nitwit, brighter Cass”, is a humbling experience. One that makes you all the more grateful ‘Brighter!’ saw the light of day.

Alright Justin! You can do R&B on an epic scale. We get it. ‘Mirrors’ was amazing, ‘Take Back The Night’ was less so and ‘TKO’ lies somewhere in between the two singles. Surely now’s the time to give the grandstanding a rest and show us another ‘SexyBack’?

Ellie Goulding - I Know You Care (Save The Children)

Fancy doing something charitable today? You spend 99p downloading an Ellie Goulding song and the proceeds will go towards Save The Children’s Syria appeal.

Fancy doing something charitable today and not downloading an Ellie Goulding song? You can always donate directly to Save The Children’s Syria appeal instead.

At the risk of going a bit Terry Wogan, there are worse ways to spend your money this week.

And the award for ‘Most inept chat-up line of all-time’ goes to...

“Sold out arenas, you can suck my penis” - 2 Chainz

In Photos: Black Lizard @ The Macbeth...