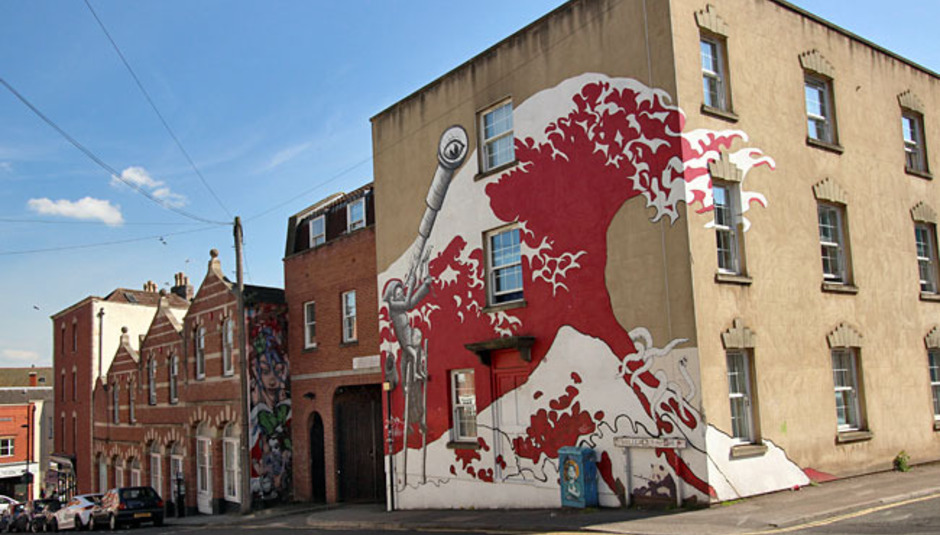 That’s it then. Summer’s over and we’re back to complaining about our post-festival blues and having to brave the rain to work. Personally, I love autumn. It’s my favourite season of the year and not just because I get to wear one of my 17 woolly hats. The colder months tend to bring a host of incredible releases – all battling for your last minute 2013 attention. And even though it’s my home, I can safely say that Bristol is one of the most innovative and inspiring cities in the entire country when it comes to new music.

Here’s just a taster of what’s going on.

Trust Fund is Ellis Jones and he makes the kind of melancholy power pop you wish you had heard during your awkward years. Rough strumming, yearning, ranged vocals and with a hint of Elliott Smith delicacy, it’s the perfect combination to fall in love with. The D.I.Y. aesthetic only makes it all the more enticing and all the more honest.

His EP ‘Don’t Let Them Begin’ has been gaining fans day-by-day, with its release a much anticipated affair. Brought out on cassette by Reeks of Effort Records, Trust Fund is one of the most exciting and infectiously pained artists to appear in Bristol this year.

This video for ‘Complicate’ was filmed all in one day at a local park and don’t worry, no Ellis Jones’ were (seriously) harmed in the making. Adding Machine are like a B-movie – full of synths, undeniably addictive and badass enough to get away with just about anything. Despite forming back in 2011, the quartet are only just releasing their debut single ‘Ships to Sink’ on September 23rd. The band was founded by Hazel Mills, who has also worked with the likes of Roxy Music’s Andy Mackay and Goldfrapp’s Will Gregory. Her Siouxsie inspired howls are packed full of roaring confidence, whilst the shrieking guitars and pulsating rhythms are more than enough to have you wanting more. They’re currently touring as a three-piece whilst member TJ Allen plays as part of Bat for Lashes’ live band. Once he’s back, they’ll be back in the recording studio with none other than Portishead’s Adrian Utley. addingmachine.bandcamp.com.

Jilk describes himself as ‘glitch & paste electronic lovely auto-good’ and to be honest, I couldn’t have said it better myself. Upon first listen it’s intriguing and almost unsettling; ensuring that you lean back from your laptop and fully digest the musical offerings he’s produced for you. If needs must, you could describe him as a more relaxed Gold Panda but his mirage of household soundscapes, every day noises, classical instruments and hushed vocals is worth a stand-alone sit in. His debut album ‘Retreat to Sleep’ is due for release on Bit-Phalanx and to gear you up for it, he’ll be releasing three EPs with tasters and mixes – all available as free downloads.

Spectres and The Naturals

Spectres and The Naturals are two of the best bands in Bristol and bands that work together, stay together. So, I was over the moon when I discovered that both bands will be collaborating on a split 10” single, strictly limited to 100 copies. Released on Howling Owl records, the bands are both set to record their debut albums and thought that it would be fun to take a snap shot of where they’re at right now. The snapshot is two brand new songs – ‘Lump’ and ‘Heat Death’ which both evoke the sordid noise-scapes and grungey infestations we’ve all grown to love. Recorded in a day and finishing on an open-ended bracket, only time will tell what these guys have up their sleeves. I’ll tell you one thing – it sounds disgusting.

Laura Kidd only moved to Bristol a matter of months ago but she’s already settling in nicely. One of the most hardworking musicians in the industry today, Laura does absolutely everything herself – from her handcrafted packaging to her video directing. New EP ‘Butterflies’ sees a softer side to the experimental songstress and features 6 brand new songs and videos, making it a crossover audiovisual EP. Lead single ‘Delete’ is a gorgeously layered vocal arrangement that’s one of the most stylishly crafted live performances I’ve had the pleasure of witnessing. With Amanda Palmer declaring her love for her over Twitter and ‘Delete’ featuring as an MPFree on Lauren Laverne’s 6Music breakfast show, you could say that things are finally taking off for She Makes War. And deservedly so - she makes some of the finest gloom pop around. shemakeswar.com

his is one of the most anticipated debut albums to come out of Bristol in a long time. The four piece have been gaining critical acclaim from all over the country, whilst making their presence known on the live music scene with an array of incredible performances. Entitled ‘Saturn Reruns’, the album will be released on November 4th via Battle Worldwide and will feature some of their best loved tracks including ‘Small Talk’. Vocalist sounds as confident as ever on stand out song ‘Exploded View’, with Empty Pools’ token shrills and encompassing breadth of guitar layers making for a very exciting listen indeed. You can get your hands on it early by heading to the album launch – taking place at RISE on November 2nd. emptypools.co.uk

There’s no denying that Punch Drunk records have produced some of the most exciting and innovative releases in Bristol for the past few years. Their latest offering sees the return of Bristol favourite Bass Clef with his new E.P. ‘Stenaline Metranil Solar Flare’. Full of his usual quirky elements, the first teaser has been released – complete with a space themed music video. Released on October 7th, ‘Stenaline Metranil Solar Flare’ looks set to add another string to Punch Drunk’s already stellar bow.

We haven’t heard from Javeon in over a year. His last release ‘Precious’ solidified him as a forerunner in a new breed of smooth R&B pop and house crossovers – gaining attention from across the country. He teased us with ‘Lovesong’ back at the beginning of August and now the new release has been given its very own wedding-gone-wrong video. Proving just how far he’s come, the song is a perfect blend of sugary sweet melodies and darkened house undertones.

This is the second track from the duo’s new EP for Exploited Records of Berlin. Featuring vocals from Idle Hands’ Shanti Celeste who also featured on the pairs 'Closer' tune on 2020 Midnight Visions, they explain that “this one goes out to anyone who thought they were getting with someone cool, but later turned out to be a dick. We've all been there.” A delicious blend of sultry vox and infectious, synth-fuelled beats.

Rise are always putting on a wealth of exciting in-stores and events for their keen customers. With co-founder Lawrence Montgomery receiving an ‘Indie Champion’ AIM nomination, the shop continues to solidify itself as a hub for music lovers in Bristol. And it doesn’t look as though things will be slowing down any time soon. As well as launching their student nights - which will see discounts, drinks and live local bands taking to the stage – they’ve secured some of their most exciting in-stores to date. Julia Holter will be performing a very special set with her full, 5-piece live band on Saturday 16th November at 2pm, ahead of her sold out show at Bristol’s independent venue The Cube. What’s more, Bella Union’s Laura Veirs will also be showcasing songs from her stellar ninth album Warp & Weft on November 20th. rise-music.co.uk

In a matter of weeks, Simple Things Festival will be taking over Bristol’s best venues. One such venue that has just been announced as a participant is Colston Hall, which proves just how far the festival has come since last year’s event. All three rooms will host over 30 acts, including the brilliant Modeselektor, No Age and Portico Quartet which will see Colston Hall at its most dynamic yet. The second wave of acts to join the line-up saw the likes of These New Puritans, Hookworms and Bristol’s own Hyetal stepping up to the plate. With this many acts to choose from and only one day to take it all in, there’s going to be some achey feet and sore heads come October 13th. simplethingsfestival.co.uk

The Croft is back!

Well, sort of. The infamous venue sadly closed its doors a couple of months ago to be taken over by cask ale pub The Crofters Rights. Whilst The Croft’s previous owners were busy coming up with an impeccable schedule for their sister venue The Exchange, it was announced that they will be returning to their old stomping ground – by putting on gigs and live music events at bar across the street The Bank. With its condensed environment and darkened walls, it’s not unlike The Croft once was and will no doubt go on to become another bustling hub of music in the Stokes Croft area.

The autumn clubbing season never really kicks off until In:Motion rolls back into town. Taking place at Bristol’s infamous Motion skate park, the line-ups are not to be sniffed at. Kicking off on September 27th, the first night sees Kerri Chandler take the reins for an event that includes Cassy, Dyed Soundorom and Voyeur. The rest of the listings is just as impressive, with Hospitality providing their annual addition that includes Camo and Krooked and Roni Size; Eats Everything supporting Carl Cox at The Revolution event; DJ Shadow providing a 25 years of solid steel; Joy Orbison and Ben UFO making an appearance for Just Jack’s Halloween showcase; Dixon headlining Futureboogie’s evening and Annie Mac providing a stage for Cyril Hahn and Lulu James. Phew! Looks like this year won’t be all about slipper socks and staying in. bristolinmotion.com

The Bristol collective were recently published on the front cover of The Wire, proving that the like-minded bunch are well on their way to ‘going places’. Losing The Croft and The Tube saw a major dent in the underground dance movement but there’s hope yet, as October 2nd sees the launch of their new monthly night at The Exchange. Expect to see sets from the group’s extensive members, as well as guests from Bristol’s music circuit.

It is with a heavy heart that we say goodbye to the best music blog in Bristol. Founder Tom Johnson has moved up to Edinburgh but will still be producing brilliant online content – just not from the West Country. As an avid attendee of shows across the city and a supporter of Bristol acts old and new, he’ll be sorely missed. He’s put together this mini playlist of some of his favourite Bristol artists as a last present to the city he’s left behind. goldflakepaint.co.uk

"The most important thing is to have ...