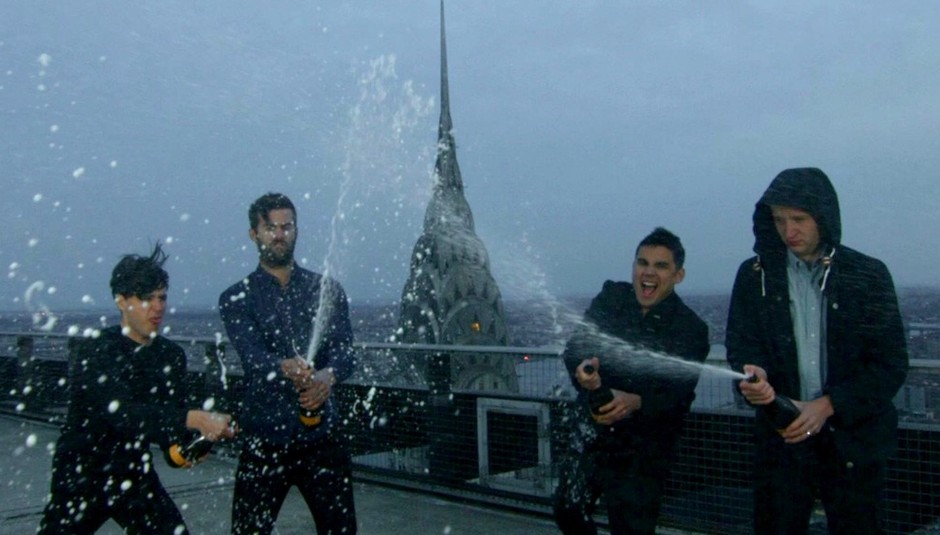 This column is about Vampire Weekend’s ‘Ya Hey’ and my personal recollections from the days when I used to love Jesus.

Now I know what you’re thinking...

This is a fair point and, although there is a large part of me that wishes I could have shoved the new Run The Jewels, Dark Bells and Spectrals songs together in a semi-coherent order, that would have been disingenuous. I cannot remember the last time I empathised with a song like I have with ‘Ya Hey’ and explaining this connection requires me to impart some personal revelations.

I promise everything will be back to normal next week but, for now, here’s the singles column. Make of it what you will.

God and myself used to be best buddies. He was omnipotent, omnipresent and remarkably understanding about my teenage impulses. I was shy, short-sighted and suffering from chronic acne. It was a match made in heaven.

Although God doesn’t ask for much in return for your belief, his representatives on Earth can be quite demanding. They asked me to wear a silly dress every Sunday and hit a gong when it was time for everyone to drink his son’s blood. They asked me to spend three days walking to Salisbury Cathedral as a physical metaphor of my love for him. Worst of all, they asked me to eat a Passover meal one Easter that consisted solely of unleavened bread and hummus. It was disgusting... like wash your mouth out afterwards disgusting.

Despite the whole Christianity thing being hugely time-consuming, pretty much everyone I met through the medium of Jesus was uniformly pleasant. My church’s youth club meant I got to spend an improbable amount of time with real life girls, which was remarkable turn given my general levels of self-esteem. Plus, I’ve only ever seen a priest naked once and that was in the gym showers, so it really doesn’t count.

Anyway, I think you get the gist by now. Me and God were tight, until I got sick. Sick to the extent that I was sat down in a disinfectant-riddled doctor’s office and told there was a strong chance I wouldn’t live to celebrate my 18th birthday.

Without wishing to trivialise the experience of anyone who is currently undergoing six courses of chemotherapy, it’s an irredeemably shit treatment for a uniquely horrible illness. As well as ruining the big stuff you enjoy in life like football in the park and styling a Morrissey-esque quiff with your hair, it also ravages the small nuggets of everyday enjoyment.

For example, the pills you’re prescribed as part of the ‘experience’ transform your tongue into a glutinous ball of fuzz with an extremely faded sense of taste. To circumvent this side effect you tend to eat strongly-flavoured salty meat for almost every meal. In hindsight, I didn’t really like wafer-thin ham in the first place but I’ve never forgiven cancer for placing my love of bacon under such intense scrutiny.

Although people’s coping mechanisms for dealing with the illness vary dramatically, the most common reaction is some sort of anthropomorphism. In other words, you project human characteristics onto a collection of bastard cells and then ascribe these traits to the people surrounding you. This usually spells bad news for a patient’s family as they get the brunt of a pent up rage that’s sick of ham sandwiches, wearing an insanely itchy wooly hat and being stuck playing goalie.

I didn’t lash out much at my family. I had God for that instead.

‘I’m a B grade student. Why didn’t you give cancer to the boy who handed his coursework in late?’

‘I once went to church three times on 24 hours. Why didn’t one of the people who only went twice get it?’

‘You promised me an eternal afterlife. Can’t I just get three more years right now?’

If you’ve never bothered with religion, the concept of absolutely despising someone who doesn’t exist must seem laughable. You can’t be betrayed by an idea. You can’t be embarrassed about dedicating your childhood to the 10 Commandments when underage boozing and shoplifting from the Woolworths pick ‘n’ mix would have been a lot more fun.

Now vomiting is no longer an inevitable part of my morning routine, this all-consuming sense of shame has faded. I can go to church for Easter and Christmas on the basis that I just switch off from the moment I pick up the hymn booklet. Every now and then, I do reflect on the time I went to Jesus camp and issue an impromptu snort of derision.

This is probably why ‘Ya Hey’ caught me completely off guard.

No offence to Vampire Weekend but making sense has never been their strong suit. “Sometimes I think I know what they [the songs] mean and I’m listening to the lyrics and then you go ‘Peter Gabriel too’ or ‘Louis Vuitton’ out of nowhere and then I’m lost,” deadpanned Steve Buscemi during a recent YouTube promo clip. Such is the abstract nature of Ezra Koenig’s vocabulary that both times I’ve seen his band live, the crowd had a better time impersonating the tremolo guitar on ‘Mansard Roof’ and ‘A-Punk’ than singing along to lines like, “His Honor drove southwards seeking exotica.”

That’s not to say there are no recurring motifs in Vampire Weekend’s music. Over the course of their self-titled debut and Contra, they’ve made an artform out of privileged angst. From the kid who can’t use an Oxford comma properly to the third-world backpacker whose “healthy sense of worth” compels him to tour a war-torn land, these former Ivy League students have frequently poked fun at naive rich kids with an empathetic tongue in cheek.

Most of this philosophising was done at an arm’s length away from the source of these existential woes. Just as you rarely see armed militia clothed in V-neck sweaters, I’d always assumed Vampire Weekend were too savvy to step into the moral quagmire themselves. They’ve already had enough grief levelled at them for being the ‘acceptable face of world music’, imagine the furore if they stopped for one second to write a song that’s not about something seemingly frivillous like bonking your ‘Cousins’.

‘Ya Hey’ is that song. Rather than dropping oblique reference points every third line, it sees Koenig adopt a magnificently blasphemous posture from start to finish. He is talking to Jehovah/The Almighty/The Big Cheese as the representative of a world of non-believers and hardened cynics. He is demanding to know, ‘When confronted with such global indifference and outright aggression, why you would not announce your existence with absolute certainty?’

Anyone who’s lost faith in religion will have posed this question before. When all was well in my life, bar a series of facial eruptions to rival Mount Vesuvius, it didn’t bother me that I’d never witnessed a shining white light and a voice booming with thespian wisdom. That would arrive in my hour of need, at a moment that required more than biblical vagaries like “I am that I am.”

The truly upsetting brilliance of ‘Ya Hey’ is that it recognises this moment will never come. It’s not in God’s nature to announce himself like that. Despite having created Zion, Babylon and the rest of world, he will watch it fall apart without staging an intervention. He will leave you strung out on a hospital bed, incandescent with fear and anger, regardless of what you might consequently think of him.

“Who could ever live that way?” ponders a disarmingly sympathetic Koenig.

His God is human like mine but he’s pitiful, not negligent; powerless not almighty. He’s as feckless as I was after being hooked up to an intravenous drip and pumped full of toxins. Cursed to stare upon a vast expanse of suffering and hope that a pop band from New York City might express the caring sentiment he’s personally unable to.

Strip away the theological context from ‘Ya Hey’ and it's worth remembering that a pop song sits at its core. A righteous swirl of drums, bass, plaintive piano, shrill vocoder and gospel chanting. Of course, there’s gospel chanting.

I wholeheartedly believe that this euphoric cocktail would amount to one of Vampire Weekend’s best tracks, even if its transcendental vision was masked by tangential shout outs to luxury designer brands or ex-members of Genesis. Then again, if this was the case, I wouldn’t have welled up the first time I heard the song. It wouldn’t have dredged up so many long-forgotten memories and I wouldn’t have felt this experience was all I could write about. Ultimately, it wouldn’t have meant so much to me.

Thank you Vampire Weekend and thank you for reading.