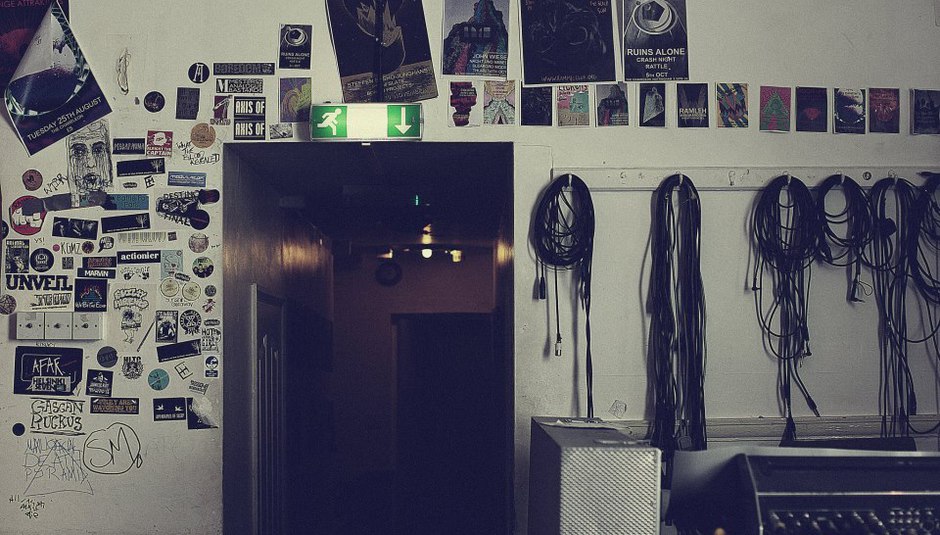 In the second Nottingham scene round-up of 2013 we focus on some of the hottest new sounds filtering through the city as well as the regular release, festival and live updates.

It's been an eventful few weeks since the last Drowned In Nottingham was published. DHP promoter Anton Lockwood and The Music Exchange both found themselves shortlisted at the Music Week Awards, and while neither came home with first prize at the end of the evening, their recognition once again proves Nottingham is fast becoming a force to be reckoned with among the music industry.

Record Store Day came and went with a bang, with Pere Ubu's David Thomas putting in a spoken word set at the city's Music Exchange record store during the afternoon before playing a full band set at the Rescue Rooms later that evening. Elsewhere, Left Lion held its own event at a packed Spanky Van Dykes, hosting excellent performances from the likes of I Am Lono, The Hip Priests and The Cusp among many others.

However, most of the drama unfolded around reports in March that the Chameleon (pictured) was to close at the end of June. With many of the city's independent promoters joining forces to make the venue's last few months something to remember, word started filtering through that the proprietor Nick Turner may have had a change of heart. Although still unconfirmed at this stage - there are still no confirmed bookings beyond the end of June - Drowned In Nottingham are keeping all eyes peeled and ears to the ground in anticipation of the next development. Hopefully those latest rumours turn out to be a true, as it would be a massive loss to Nottingham's music scene were it to join the likes of Junktion 7, The Garage and The Narrowboat in the annals of history.

Following on from that, Splendour has just announced its full line-up. Now in its sixth year, 2013's event will take place on Saturday 20th July in Nottingham's idyllic Wollaton Park setting. It's also a very Nottingham focused affair, with local boy done good Jake Bugg headlining, and fellow city dwellers Dog Is Dead, Kagoule and Indiana occupying prominent places on the bill. Also playing alongside them will be Squeeze, Peter Hook & The Light, Kt Tunstall, and Maximo Park, who headline the second stage. Here's Indiana's latest video for the song 'Animal', which is available as a free download from her Facebook page.

Finally, this year's Indietracks line-up is shaping up to be one of the finest in the festival's history. Alongside headliners The Pastels, Camera Obscura and Bis are the likes of The Brilliant Corners, Helen Love, Haiku Salut, Still Corners, The Wave Pictures and Fever Dream. Taking place at its traditional home of the Midland Railway site in Butterley on the weekend of the 26-28 July, tickets are available here.

The people at Denizen Recordings have found another gem in the shape of Weirds. Although based in Leeds, the four-piece have more than just a label connecting them to Nottingham. Their debut double a-side single 'Crocodile'/'Yolk', out on 27th May, just happened to be produced by Hookworms' MJ, himself a native of rural Nottinghamshire. What's more, it sounds like the finest concoction of dance-infused neo-psychedelia we've heard since _Merryweather Post Pavilion' first graced the stereo many moons ago. Yes that good. Judge for yourself below...

First up comes yet another new(ish) collection of songs from Nottingham's favourite agit-pop punk poet Jason Williamson aka Sleaford Mods. Austerity Dogs came out a couple of months back on Harbinger Sound, and follows on from where its predecessor Wank left off. Prolific as Williamso is, here's an appropriately titled new track that doesn't feature on the album, 'Black Monday For The Tory'.

Widows have been making an unholy racket in and around the city for the past five years. Borne through a shared love of Kyuss, last year finally saw the release of debut LP Death Valley Duchess via Bad News Records. Recorded and produced by Pitchshifter's Johnny Carter and Bivouac's Paul Yeadon, expect a new EP shortly. In the meantime, here's 'Green Tsunami' from said LP.

Another outfit currently making waves in the city are Queens Of The Stone Age influenced four-piece Band Of Jackals. Their self-released EP One Hand Washes The Other is out this week and it rocks like a bastard with autism. Their launch party at Nottingham's Jam Cafe last Friday was an explosive affair to say the least. This is 'Don't Make Us Laugh' from the EP recorded live earlier this year.

Lorna have been crafting textured lo-fi soundscapes for a decade-and-a-half now. Comparisons ranging from Teenage Fanclub and Lowgold to The Lilys and even The Carpenters, they've become something of a local anomaly throughout their existence. Which is by no means a bad thing. First album This Time, Each Year came out to a wave of critical acclaim back in 2003, and while some of their peers went on to enjoy minimal success (Seachange, Scout Niblett), Lorna carried on making music mainly for themselves. Fourth long player Heart Of Wire was released in March, and is possibly one of the most understated records we've heard so far this year. This is the recent single, 'As She Goes By'.

Electro queen Ronika is back with a new EP, Rough N Soothe. Inspired by a combination of Gloria Estefan's Miami Sound Machine, TLC and reggae artist Sophia George of 'Girlie Girlie' fame, it's a marked departure from her previous releases, only serving to highlight her artistic development both from a songwriting and arrangement perspective. Here's the video for the title track.

Experimental instrumental trio Cantaloupe release a new single next month (June 17th). 'Splish' /'Wet Dog' is available on twelve inch vinyl and digital download through Hello Thor Records and sounds as bonkers (like Battles on speed) as its title suggests. They're also putting on a launch party at the Chameleon next weekend (11th May) alongside I Am Lono and The Cusp which is definitely not to be missed. Here's 'Splish', which recently received its first play on Radio One courtesy of Huw Stephens.

Last December we introduced you to the wonderful OneGirlOneBoy and their awesome debut single 'Is This Love'. We're pleased to announce they're back next month with a brand new self-titled EP. Produced by Gavin Monaghan who's also worked with Spiritualized and Editors in the none-too-distant past, it's a giant leap forwards from their previous recordings and fully justifies the Twin Peaks comparisons regularly bestowed upon their live shows. This is former single 'Sylvia', released earlier this year.

Finally, Privateers have been kicking up a storm recently with their exhilarating brand of post-grunge, occasionally melodic but mostly firebrand punk rock. Featuring former members of Sufferkiss and Alberto Veto, recent shows supporting the likes of Filthy Boy and Luls have seen the headline bands blown off stage both times so we wholeheartedly recommend you check these guys out. They also have an EP available for a free on their Bandcamp page. Have a listen.

We know very little about mysterious three-piece Debris Slide other than; A) They formed approximately fifteen months ago at Nottingham University; B) They're named after a Pavement song; and C) they make an unholy racket that sits somewhere uncomfortably between Psychocandy era Jesus & Mary Chain, fellow mid eighties noiseniks Meat Whiplash and more recent artpunk terrorists like No Age.

They've only played a handful of shows and in three weeks time on 28th May will be sharing the JT Soar stage (carpet?) with Internet Forever. They've recorded two EPs to date which are available as a compilation CD for the princely sum of fifty pence from their website. This is 'Baby You'll Be Fine'. The East London-based four-piece head out on their first headline tour of the UK this month having supported the likes of Spector and Swim Deep in recent months. Nottingham welcomes them to the Chameleon on Saturday 1st June where they'll be joined by fellow DiS favourites Hunting Party and New Zealand noisepop trio Popstrangers. With debut long player Comfort set to be unleashed via Luv Luv Luv Records two days later, it promises to be an explosive show. Here's the brand new video for 'All I Wanna Do', taken from the album.