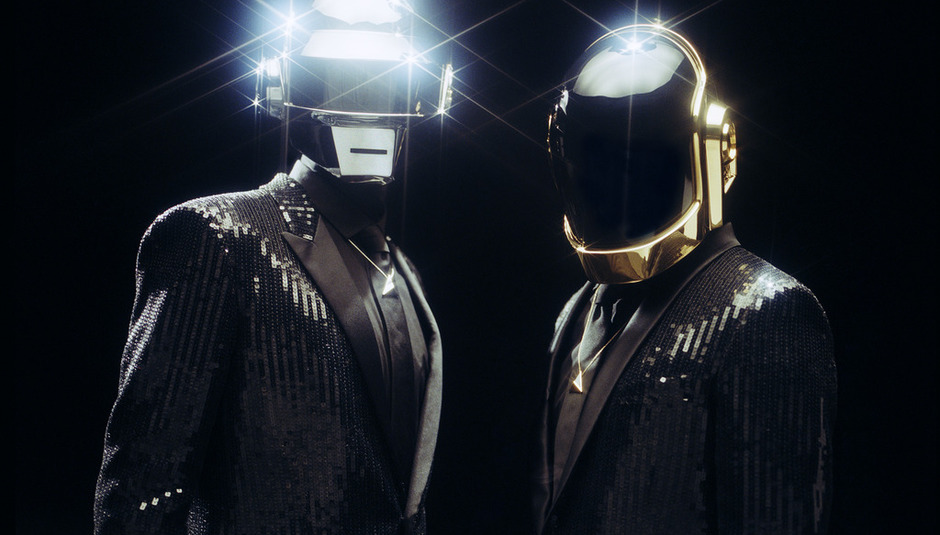 You know the facts by now: the roll call of discerning collaborators, the listening party in the arse end of Australia, the fake Glastonbury appearance, the glittering robots kitted out in Saint Laurent – and that it’s Daft Punk first new artist album in eight years.

And now, the next stage of the duo's drip-feed marketing plan, is to let a bunch of journalists who’ve heard the new album once in a soundproof room in the Sony offices loose on the internet with their, er, random memories of it. Hiyaz!

But we can tell you, in short, that Random Access Memories is a lavish celebration of a time when dance music was human and had a proper beating heart, told through the eyes of two robots who have redefined computer music. It’s when pop-rock was easy and groovy, when the people that played it had impressive facial hair and their melodies had the bronze glow of a sunset over the Pacific Coast. It’s also bloody bonkers.

For the full Random Access Memories experience, however, read on below.

Daft Punk deliver their mission statement. They paved the way for stadium-filling electronic beats, but now they’re rejecting the WARMP-WARMP of modern club fodder and giving life back to music by digging into the glossy disco that defined dance in the mid-Seventies. And they’ve hired the best sessions musicians of the era – including two that played on Michael Jackson’s Thriller and Off The Wall – to play them live. Basically, it’s all well clevs. 'Give Life Back to Music' is as tight and as bright as a pair of starched white flares on a flashing dancefloor, anchored by Chic’s Nile Rodgers and his elegant, genre-defining guitar hooks. Then the familiar vocoderific vocals chime in, setting up the album’s contrast between the full-blooded ‘human’ jams and the robotic narrator. It sounds like – and probably did cost – millions of dollars.

Daft Punk recall 2001's 'Something About Us', where a robot with Wall-E-sized feelings gets his own retro-futuristic ballad. But rather than another slinky pick-up song, ‘The Game Of Love’ is a shadier LA noir. It introduces Random Access Memories’ melancholic tone, as Mr Robot drives aimlessly around neon-lit backstreets pondering how he’s going to get the ladyrobots to like him. It’s sultrier than anything Daft Punk have done before too, the slippery, serpentine rhythm like the wily bionic woman of his dreams, but it bristles with tension, as if he might get zapped at any minute.

This song tells the story of how Italian disco innovator Giorgio Moroder discovered the Moog modular synthesiser, the piece of equipment that made his name, and probably the world’s first electro-biography. It starts over a click track and the faint background chitter-chatter of a café and builds into something else entirely. It’s both a history lesson from Moroder and from Daft Punk, whose cosmic Kraftwerkian synth line pays homage to Moroder’s space-age sound – the one that famously underpinned Donna Summer’s ‘I Feel Love’. “Free your mind of harmony and the preconception of what is correct”, another voice says, at which point Daft Punk take a hefty dump over everyone as all the elements that have been gently simmering away kick in together. The drums try to break out of the speakers (there’s even a drum solo!), the strings soar opulently and the temple of synth tries its best to contact another planet. It’s going to blow your tiny minds.

Any follow up to 'Giorgio' is going to sound like a wet fart in comparison. So it may as well be pianist, rapper and Peaches and Feist collaborator Chilly Gonzales’s song that suffers the blow. Its shimmering ivories and lounge-jazz vibe are a relaxed elevator ride down from 'Giorgio By Moroder’s dizzying heights, with plenty of falsetto for good measure, but it comes off like just a bridge between two far better tracks.

It’s on track five that DiS starts to wonder who has been crushing on each other more: Daft Punk or their collaborators? Not just a mangled voice smoothed out through a vocoder, Julian Casablancas’s dive bar attitude swaggers in and out of the song too. But the song's plucky guitar, reminiscent of The Strokes' early albums, quickly turns into a slower, throbbing Eighties electro-pop number not dissimilar to something by The Cars – or from The Strokes’ latest album, Comedown Machine. Pompous rock solo aside, they’ve played it a bit safe.

6. 'Lose Yourself To Dance'

Aha! Here we go. Daft Punk take the baton from ‘Give Life Back To Music’ and run with it once more, insisting this time, via Pharrell’s squeaky falsetto, that you “lose yourself to dance”. And will you? Well, they do insist, repeating it like a mantra until you succumb to its glittery groove, continuing until the lights have come up and the empty bottles are being swept off the dancefloor. For Nile, whose career in Chic was cut short when the after effects of Disco Demolition Night in 1979 cleared disco from the charts, tracks like this must feel particularly sweet.

Touch, DiS likes to imagine, is one big LOL at dance music luddites who shove a drop on a track and call it a banger. It starts with the ghosts of disco past swirling around dance music’s cemetery, while an ominous, God-like voice chimes in with “Dance. I remember dance.” Veteran songwriter and Seventies pop music architect Paul Williams appears on vocals, plucked for his work on cult 1974 sci-fi rock musical Phantom of the Paradise. The young Thomas Bangalter and Guy-Manuel de Homem-Christo were obsessed with the film and its murderous villain was the inspiration for their robot outfits. Likewise, ‘Touch’ shares Phantom…’s theatrical DNA. From graveyard, it springs into life as a camp disco number comprised of a dizzying 250 tracks, with more gear changes and jazz-hand moments than anything by Andrew Lloyd Weber. Would any of the current chart-scaling producers have the guts to make something as bombastic as this?

There isn’t one piece of ass that hasn’t shimmied to this perfect disco-pop single, on which Pharrell sings about sexing ladies and Nile Rodgers smashes some sweet harmonics on guitar. It’s even massive in Mongolia. By the end of summer you’ll be sick of everyone putting this on at the end of the night in a last-ditch attempt to get laid.

Number nine kicks off with another orchestral gesture: grandiose string arrangements that could bring an opera house to its knees. The rest of ‘Beyond’, meanwhile, evidences the smoother side of disco, all subtle synths, sublime songwriting and radio-friendly grooves. The guitar licks are straight out of Lindsey Buckingham and The Doobie Brothers’ Californian rock book, with a rhythm that canters over the Hollywood Hills and into the sunset. But it’s all still strangely in a funk. If Paul Williams’ wistful lyrics are anything to go by (sample line: “there’s no such thing as competition…the perfect song is rendered silence”) perhaps it’s Daft Punk’s way of letting the younglings know that it’s OK to be uncool.

An instrumental continuation of ‘Beyond’, ‘Motherboard’ presents a cinematic jungle of frenetic drum patterns and reedy wind instruments, strings fluttering near the canopy and sunny synths shining overhead, which is possibly about to be destroyed by replicants. Riding Terricons. In space! It’s a meaty ‘fuck you’ to anyone who thought that their Tron: Legacy soundtrack was underwhelming, an ostentatious exploration of the future (via the past) that builds into a Massive Attack-epic climax. The sound of the bathplug being pulled reminds you that Daft Punk aren’t just laughing at everyone else but at themselves, too.

US garage-house pioneer and long-standing Punk collaborator Todd Edwards appears on this lovely ditty, providing both vocals and some of his micro-sampling mastery on the production. It harks back to a time when Californian pop-rockers like Fleetwood Mac and The Eagles ruled the radio waves, channelled through Edwards’ recollection of gliding along palm tree-lined Mulholland Drive, sunroof down, with Thomas Bangalter during the two weeks they spent recording. Todd Edwards said of the album that he’s waiting for everyone to hear it so that he’s not “making music in a sterile world anymore”. If they like it as much as we do, it won’t be long.

If there’s one electronic artist doing it right at the moment in Daft Punk’ laser-sharp eyes, it’s Animal Collective’s co-leader, Panda Bear. As such, this track sounds exactly like something the latter might write for his Brooklyn band, had they added two singing robots to their line-up. It’s the most unusual sound for the record, potentially because it’s the only purely electronic song and thusly with a hipster-house beat. But, as is Panda Bear’s special skill, its dreamy electronica still sounds lush. “Everybody will be dancing and be doing it right,” the robot, prophetic as ever, calls.

Really, Daft Punk could have ended here, but they’re having too much fun. Old French touch guard DJ Falcon joins them for blast-off. Think of this as ‘Aerodynamic’ but in live mode: an Amadeus-sized overture that drives eerie organs, pounding drum breaks and modular synths whistling like a kettle boiling towards a mind-fucking finale. But the climax never comes. You hear an excerpt of an exchange between mission control and the last captain of Apollo 17 before the track erupts like a rocket shooting into the great unknown once more. Who knows what it will return with next time.