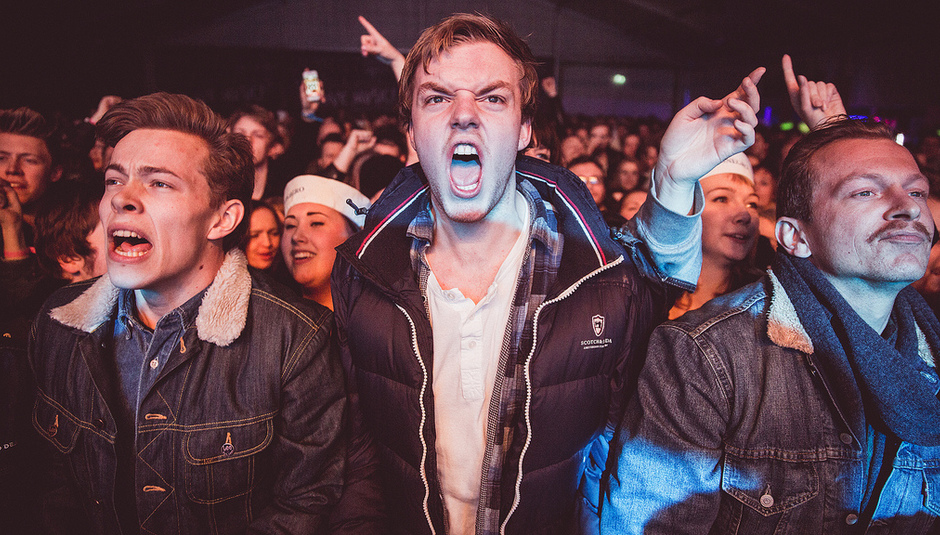 All the clichés about Norway and Oslo have surely been written hundreds of thousands of times. Yes, it’s expensive, but expense is relative – a burger for £14 doesn’t seem so much when it is accompanied by a £10 bottle of beer. We know it’s cold in February, but looking down at the snow-covered fields of England in a relatively cold period (called “Winter”) lessens the impact, especially when Oslo's temperature hardly drops below -3 with barely a breath of wind for the festival's entirety. It is irritatingly warm - none of the venues are even remotely chilly.

The vastness of by:Larm festival’s live program is a positive but the drawbacks are also clear. Things shall be missed, clashes will happen and risks may be taken; sometimes you are rewarded and other times punished for a bad choice. With the number of “new” bands high, it can sometimes be the case that it is difficult to come out of a 4-day event like this having seen more than a handful of exceptional artists or performances. Or, you could discover a lot of very good, very new and very interesting music but most likely something between those two; it really depends on how easily impressed you are. Fortunately, there were a few real high points this year, as well as large complement of acts who manage to shine for varying lengths of time and at varying degrees of brightness.

Anna von Hausswolff has the potential to be one of Sweden – and Scandinavia’s – finest performers. She is occasionally Kate Bush-like, yes. In truth, she’s probably among this year's finest artists and the fact that she released an album as complete as Ceremony at just the second time of asking underlines her excellence. That record and much of her music is nothing if not morose, but it does have occasional moments of brightness and hope scattered throughout. Before a note was played, you would have to say that second to the Kultirkirken Jakob, Oslo’s Nasjonal Jazzscene Victoria is the best place for von Hausswolff, but given the intensity of her performance that is a viewpoint which may need to be reassessed. Intensity is something in which the Swede deals heavily (and she admits as much tonight, playing a somewhat curtailed set), both live and on record.

In the past, on these very pages, I have written as to why Ceremony is of merit, but sitting side-on atop the stage, von Hausswolff does not make her physical presence the centre of attention. This is an interesting dynamic, given how dominant a force she is. ‘Epitaph of Theodor’ acts as the album and the show’s prelude, with no words spoken or sung, just tension being ratcheted steadily. The following few songs accentuate their recorded moods, no more so than the concluding ‘Funeral For My Future Children’ which is even denser more extravagant in real life. Von Hausswolff flings her head uncontrollably back, whilst her fingers forcefully turn those emotions into music. Patrons show their appreciation with a standing ovation. Efterklang’s live set-up is much more scaled-down than the grandiose shows of the past few years. Any show in a church has that opportunity to feel a bit more special but Kuluturkirken Jakob serves the purpose particularly well tonight. Pyramiden, the band’s fifth studio record, may never get a true homecoming but Oslo is at least in the same country as – if not remotely near to – the place in which the album began its life, something the band remind us of. I have no real idea of how long the band planned to play for tonight but it does not seem particularly long, such is the nature of these events. That said, a showcase-type festival should be to showcase music, and however long they play for, we get very quickly that these Danes are very good indeed and that Pyramida has been a further leap in the band’s evolution, and one in the right direction. They even try a bit of experimentation for the last song, but what comes before was majestic enough - 3D projections and all - that they could have launched a torrent of abuse at the audience and nobody would have been all that bothered. What is more, they seem to become happier with every performance.

Nils Bech had been an act who many Norwegians had mentioned as exceptional. He sings in a strong Norwegian accent, almost to the point of caricature, a refreshing change from Norwegians singing in faultless American accents. I have no idea if the Thursday show at Gamla is his usual fare but there are props, of sorts, comprising of a 6-feet tall plant and a golden blanket, used as initially as an awning for the plant and then as a cape. He takes apart these items systematically during the show, slicing off a leafy branch to imitate a penis, swinging it in a style not dissimilar to Morrissey before finally laying the unpotted plant to rest in the middle of the audience, come the show’s conclusion. I stood there with wild-eyed, feeling somewhere between bewilderment and pure fascination... As for the music? Well tonight it’s kind of down-tempo melody-led electronic pop with strings added for heightened melodrama. The majority of tonight is comprised of songs from his newest full-length, Look Inside, which is a collection of songs racked with sincerity and openness. In some ways Bech's work is redolent of the music of another Norwegian, Jenny Hval – perhaps not in actual sonic terms but certainly in performance and approach, more specifically one which makes you stop to think and which sets you at odds with what you may have previously thought. Naturally, if you come with no preconceptions then the impression Bech leaves on you could be immense. The rest (the good, the notable and the dashingly handsome)…

The above three acts represent the exceptional, close to the peak of musical prowess. There was more too. Here, in short-form, in a rough but not strict order of enjoyment were some other picks of this year's festival...

It has been two years since I first saw Deathcrush play live and they’ve lost none of the vigour and aggression for which they are renowned, nor have they lost the signature head flicks, screams and massive riffs. They swapped a member, though, with drummer Andreas departing to be replaced by Vidar Evensen, of Årabrot. He really whacks the drums. All in all, fun which is simultaneously clean and dirty.

In the same place (Kulturhuset) but a day earlier Carmen Villain played a brief set. A lethargic and repetitive melody combined with guitars and drums of a certain loudness frequently make for excellent listening, and that becomes hugely apparent when ‘Lifeissin’ is heard close-up. Perhaps the greatest compliment I could give it is that the Prins Thomas remix is probably only half as good as the original. No offence, to Prins Thomas.

Throughout the three days, there are many great things of an electronic and dancy bent at Jaeger which has light shows as impressive as its ceiling is low. There we see Bottled in England, a Danish group whose atrocious name belies some VERY LARGE sounds indeed. Pulsating, almost. The vocals perhaps aren’t an enhancing factor in the slightest but neither are they decimators of merit and it's easy enough to just forget yourself and go along with it all.

Swedish trio Nonono also do “their thing” which, to my ears at least, sounds like credible Eurovision, itself is a step below incredible Eurovision. That is a term not intended as an insult, as everything here is tight. Would ‘Like The Wind’ have won last year’s Eurovision Song Contest? Probably not, but is a song which has a tendency to fill you full with all kinds of positive emotions. By:larm tip: if you were inclined to just perch yourself in a venue from start to finish, then there are worse places than Sentrum Scene, given the extensiveness of the acts playing there and also the venue itself.

Jumping back in time, the concentration camp projections which accompanied Ulver’s show here two years ago are still ingrained deeply on my memory, so much so that it takes several minutes for me to be clear from this long-gone distraction during the buoyant and occasionally brilliant Billie Van’s set; a poppy rock show clearly not suited to such images of misery. Her most impressive songs are the most upbeat and quickest. People often class music by what is “important” and use frustrating terms like “life-changing” far too readily, sometimes whilst dismissing music which is seemingly “throwaway”. Billie Van’s rockabilly pop is not something you’d “define yourself by”, they might say, but it is a mistake to define yourself by music in the first place. What you get is bite-size cuts of sweetness in a style you might expect from a member of Mikhael Paskalev’s troupe. In short: Likely to bring a smile to your face and a spring to your step.

There are many other good, great and appealing things about by:Larm in general, such as the atmosphere, the proximity of the venues and all those other things which make the experience comfortable. A festival cannot survive on atmosphere alone, after all, so there’s also the fact that you can catch Bjørn Torske playing a three-hour DJ set on a mezzanine in a temporary wood cabin, during which he appears to be overdosing on tedium. Regardless, it is kind of relegated to background music, so he cannot be blamed, great though his choices were. “by:Larm is a festival which truly and accurately reflects the best the Nordic region has to offer”, is a quote you’d expect to find as part of the festival’s promotion, but it is broadly correct. There is something for everyone and more than enough for everyone, whether it is avant-garde, metal, fulsome electronica or “credible Eurovision”. Plan wisely, dress sensibly and you shall have your reward.

Close Knits: Beyond the noise-pop pal...