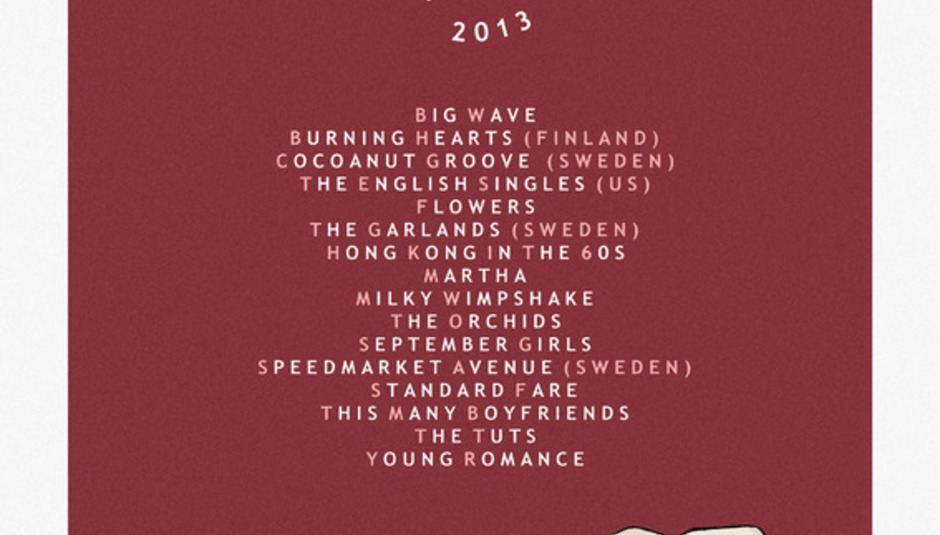 Close Knits: Beyond the noise-pop pale #2

Close Knits: Beyond the noise-pop pale #2

Here's the second installment of a new monthly column celebrating the sunny delights of DIY fuzz-pop, noise-pop, post-punk and straight down the line, knitwear endorsed indie-pop. We'll be taking the bittersweet, the shambling, the fey, the angular, the adrenalin fueled, the rough around the edges, the anarcho, the slacker, the young at heart and the jangle all the way and waving them emphatically in your face, should you care to listen...

Soooo The BRITS happened this week, right? It looked like fun, didn't it just. Probably about as much fun as eating your own hair, or sharing a pastry with Ed Sheeran. Oh, wait, he wasn't even on the list? Wonders will never cease.

Anyway, over in guitar music's dark subterranean enclave we've been seeing stars and hearing voices since the grand unveiling of Veronica Falls' second full-length LP 'Waiting For Something For Happen' - a perfect, proper, page-turning pop tome. We've also been getting intimate with the sublime new Mazes LP 'Ores & Minerals', kicking back to Golden Grrrls, Cheatahs and Brown Brogues' pitch perfect debuts, devouring the new Eat Skull and raising a glass of strawberry cider to Scott & Charlene's Wedding and The Stevens. Oh, and getting heart palpitations over new London supergroup Primitive Parts.

London Popfest - is happening next weekend with This Many Boyfriends, Milky Wimpshake, Martha, September Girls, The Orchids and more - and we had a great time at Hackney's Sebright Arms last month watching a whole host of amazing bands play a benefit show for DIY Space For London. It's a really vital project - go to the website here to see what it's all about; support and donate! Next month sees the inaugural Wales Goes Pop! festival in Cardiff – with our favourites Joanna Gruesome and more – and April 7th plays host to the first DIY Cultures Fair at London's Rich Mix. We'll be there.

Suplex Cassettes started in 2009 and is about about to release its 21st offering with 5 more in the pipeline for 2013, including the wonderful Weird Menace, with the band's tape launch taking place at Dalston's Powerlunches on March 14th. Suplex is run by Matthew Lewendon, who also plays in Fair Ohs and The Teen Mums; have a browse at here.

Sheffield recording studio and label Tye Die Tapes have also put out some of our favourites including Slowcoaches and Sealings - - and thanks to London's Casenove Tapes for bringing the rambunctious 21st century pub rock of Domestic Blitz to our attention and also to Good Oscillations - the new venture of Phil from Omi Palone – for alerting us to the wonderful Areca Grove at the end of 2012; listen here.

But now, behold this fine selection of songs getting us all hot under the collar of late...

Brown Brogues – 'I Love You, Mike'

A scuffed up, lose-your-shit-to tumbledown ode – of the 'romantic' variety - from Manchester by-way-of Wigan noiseniks Brown Brogues. Indecipherable blow-horn vocals, aggressive bursts of shambling percussion and, of course eye-watering, garage dwelling squalls of Ty Segall-esque noise. We're not sure for whom this perennial valentine's treat was written but we'd definitely take it over a packet of Love Hearts any day. It's from the duo's debut album 'Born To Lose' which is out now on Ultra Cool Records and which contains the kind of song title you wished you'd thought of first; 'I Drove For Miles Just To Hear About That Book You're Reading'. Jump in and belt up!

Footnote: This video was filmed in a dungeon.

Was this inspired by Real McCoy's 90s club cracker of the same name? Probably not. We feel like we've been waiting our whole lives for Primitive Parts to rear their (beautiful) head - a triple whammy powerhouse featuring Lindsay from Sauna Youth and Kevin and Robin from Male Bonding. This lackadaisical, dead-eyed, low-end saunter just leaves us aching for more. Primitive Parts play a benefit show for Cancer Research at the Dalston Victoria on March 8th.

Lapping surf guitars, beefy organ and an ebullient eruption of textured Animal Collective-y vocals; sink your teeth into this! Actions sometimes speak louder than words, you know, and this song would probably get Handy Andy all hot and bothered - cashback! Giant Burger's debut EP is out now and they play Dalston's Powerlunches March 13th.

Living the drone dream, one strident hi hat crash at a time, 'Memory' is restrained, considered and immersive, and with the occasional candy-coated vocal flourish, will no doubt burn a hole in your skull. London duo Feature play the Shacklewell Arms on March 2nd and hear more over here

A kick in the teeth. A slap in the face. A lung-blasting roar here, a full-throttle guitar chug there. With its whirls of stoner-laced neo-grunge, we're headbanging our way to oblivion, tangled up in a moth-eaten sweater as the mighty axe shoots out riffs like daggers. 'Green Milk' is taken from Breathe Out's debut EP, which is out now on Art is Hard Records and which was recorded at Hackney's Soundsavers studio, which is like the Abbey Road of UK DIY recording .

As tenuous footnotes go, this song kind of makes us think of Hole's bile-fuelled anti-hit 'Plump' - “I'm eating you / I'm overfed / your milk's in my mouth / it makes me sick” - although Breathe Out's milk is fantastically green and probably has magic powers.

A deftly carved topside of the highest calibre hypnotic pop, 'Bodies' serves up a concentrated, 7-minute jam of fruity vocals and transfixing guitars and is taken from the London quartet's second LP 'Ores & Minerals'. Out now on FatCat, it's an intricate, intimate and tightly coiled collection; a slight detour from their blustering debut but we're definitely on board. With bells on.

Threatening to overtake R Stevie Moore in the prolific lo-fi stakes, this rollicking hit of gorgeous drive-thru pop from Brighton's Keel Her is second 7” which came last year on London's Critical Heights - and which continues to bring us both joy and fear on a daily basis.

A portentous punk snarl laced with heady psych opiates, 'Form and Function' is a beautiful meeting of minds. The Leeds five-piece drone and meander their way around stories which stick and guitar lines which bite and, chastise us if you will, but they're almost like the band The Music never were.... Their LP 'Pearl Mystic' is out March 4th on Gringo Records and it's got a preeeetty album sleeve!

West Felton 'field-gazers' farm youthful countryside chaos with this diced up pastoral ode to the DC luminaries. Out on a beautiful pea-green split cassette – courtesy of Coastal Wizards - with Brighton “pop sweepers” Ancient Times, if brevity is the soul of wit then Furrow are rib-tickling us to the high heavens. Please sir, can we have some more?!

Although we don't adhere to Spinoza's rejection of Cartesian theory (a painful memory for a recovering Philosophy graduate) we do very much like this hooky, twangy rifle through the rushes of New Orleans' guitar-pop. Like freewheelin' down a hill on your Dutch Bike with the wind rushing through your hair.

Quintessential Britpack punk coming in at all angles from the London supergroup who truly encapsulate the sense of community that we hold dear to our heart. Featuring members of Lovvers, Prize Pets, and French Kissing, this song conveys teenage ennui with a stripped back blast of punk laid bare, shunning the coterie of effects laden guitars. Edifying. It's from their demo tape which came out last year on Sexbeat.

The Yawns – 'Full of Admiration'

A gorgeous swell of distant chiming – at times falsetto - voices, glittering slow-mo guitars underscored by jangles, with the video released on Valentine's Day. We don't know much about The Yawns but we like what we hear.