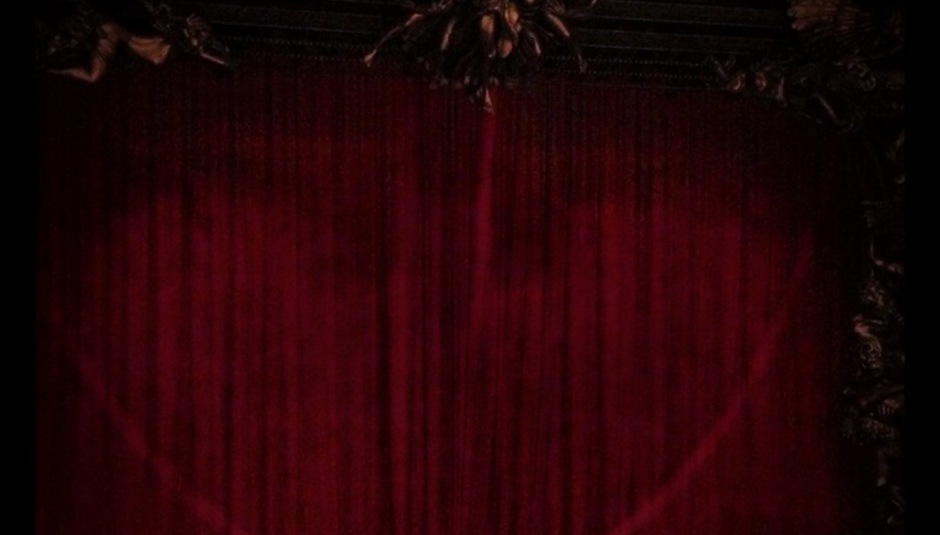 He moves like Jagger... scrap that, he moves more like Jagger’s shadow. Lithe, crooked, a controlled chaos, with these jutting motions that punctuate the syllable before the plosive sound. Threats, rather than eruptions, from a man who clearly has earthquakes juddering way down inside. Deep down, alongside that hole where his soul used to be, and it’s from here that he warns you, seconds before the (for want of a better word) sound explodes. And what a fucking glorious cavalcade of noise it is, but we’ll get to that, later...

First, let’s not pretend that tonight was simply a chance to gawp at Nick Cave throwing shapes. Sure, he was up there, lurching at the orchestra pit, beneath some stage lights, with his hirsute henchman. Tonight, in Her Majesty’s Theatre however, this was a real occasion. Not so much a “game-changing” moment in world history, but one of those pivotal nights that will landmark my (gig-going) life. With the right kind of eyes, you can see the high-water mark...

It is an incredible space, an exceptional band, at the very top of their game (“I’ve seen them loads over the past 20 years” splutters a guy at the bar “and this is by far the best I’ve ever seen them!”). Fine wine, aged steak, no potatoes but don’t get me wrong, this was not in the least bit mature - if there was a middle to this road, it would be aflame.

This is the right place, the right time, but the ornate statues lining the stage and Phantom of the Opera display cabinets are mere garnish for the feast that tumbles forth...

The songs are impeccable, but then you probably knew that. The new record (previewed in the first half of tonight's set) has a new-found heft, and also much more space than what you'd expect from a bunch of men who quite often pummel you into submission with their claustrophobic blues-rock. These are not grand battlefields of noise nor are they the lovelorn piano ballads we've gotten used to. No, no, Push the Sky Away is another demonic-beast entirely. A gentler, Where The Wild Things..., sleeping lump of hair and melancholy that could wake up and pounce at any moment. There's an element of balladry, but also an early morning, watching the sun rise over a field of bloodied bodies 'vibe' to these soundscapes. War is over, but a whole new battle for your heart and soul is beginning. It's far more textural than the NC&TBS you're used to, but they haven't gone quite as far as Liars did with WIXIW. It's still very much a Bad Seeds record: ravished by life, putting itself back together, and occasionally threatening to stalk the darkest recesses of your mind.

Cave pulls the air, as if he’s yanking an angel’s ribs in two; he twirls, lunges and punches, which could seem like the acts of a lunatic wrestling invisible adversaries, were it not for the glorious mess that sprawls around him. The Bad Seeds’ mongrel of gospel and blues and punk-rock’n’roll mixes the guttural with the sensual and pounds spiritual spectres until they’re something celestial. Which is to say, this is the greatest show on earth, just don’t forget to tip your hat to the devil when the doorman flings your 'I'm terribly sorry guv'nor' ass back onto the filthy/icy streets of London.

Journalists sling words like “spell-binding” onto the page willy-nilly, but watching NC&TBS tonight, few superlatives seem sufficient. As ‘Deanna’ reaches its climax, I can’t quite work why any other bands bother. It’s been done, you can't touch this, let alone better it, pack up your pedals and go home, bucko! Try as you might to evolve music, and entertain new generations with the magic of rock’n’roll; leather jacket over the holes in your pedestrian soul; auto-tune your 'talent'; hell, make up some backwater mythology all you want; but you young pretenders, you give me nothing but a heavy-heart. It gets heavier and heavier as I realise how few acts will ever have the opportunity to experience the kind of career trajectory in the future. If you honestly think anyone is going to be allowed to exist long enough to transform from some punk-rock brutalists to become Hollywood’s goto orchestral sadists (oh, wait sad-ist, as in miserable, oh you know what I mean... sex is never far away from these fine looking gents) you're sadly mistaken. The ship has sailed, the party is over, pack up your drums and go home, bucko!

Everything about tonight - from a choir of school kids (no language was censored for their innocent ears... I'm sure they don't know what a "snatch" is, let alone why a match would fly up it), the strings (O' THOSE HEAVING, HEAVEN-SPUN STRINGS!), the lyrics (no other human can use "mother fucker" quite so poetically), the double-drummers, the snarling kick drums, the bass lines, Warren Ellis being Warren Ellis: the freest man on earth, and the pianos (O' THE TEAR-SOAKED PIANOS!) through to the subtle introduction of MicroKorg soundscapery - is a reminder of what a live music experience should be. Musicianship, pure and simple! Performance and true artistry too. Filth, fury and dark humour (ridiculous rhymes... and for some reason I made a note in my notebook about Heath Ledger running on stage shouting “why so serious?” because really, live, the eye brows arch a tiny bit more than they seem to on record). Even the way the microphone lead becomes entangled in the music stands filled with dog-eared A4 sheets, and the way the cord becomes knotted on the monitors, is no big deal for a man who treats every little thing like a weapon (in this case, a lasso or a torturer’s whip, depending on the song’s venom).

Confidence beams from the stage, but it's not that dead-eyed coke-daydream cockiness we’re used to seeing on TV, no-no this is a confidence that can only come from time and understanding the timelessness of being just another human being shuffling through the vast universe. It's knowing that our existence is meaningless in the history of humanity, so let's just roll with it.... mostly, it's a confidence from mastering your craft. And then some. And the craziest thing is, it isn't Nick Cave who steals the show tonight, but once again, the coolest man in the Bad Seeds world, Warren Ellis utterly dominates the show. No other human seems as free and loose as Ellis. Rather than a Keef-like casualty who's hanging on there, Warren waltzes around the stage like he owns the place, and picks up a multitude of instruments, playing each and every one like they're a ball of fire that needs more fuel. At times, especially when he's taking a break from ignoring Nick trying to hump his leg to conduct the string section, you're not sure why it isn't his name above the door, as he javelin's his arms to the sky like some kinda Norse god. He's a force of nature, an uncaged genius, rollicking around the stage for his own amusement. What a fuckin' dude! And what a pleasure to see him in action so close up, in his natural habitat...

From walking in to the moment the lights un-dim, tonight feels unreal. An unresolved puzzle, like, did I just drink whiskey from the teat of God or was I just pissed on by an angel (and did I quite like it)? Have I been wasting my life seeing gigs in venues without this opulence? And why do I keep having epiphanies, as my head rocks back and forth whilst my feet become possessed by the beat of two drummers (oh yeah, I forgot mention Barry Adamson was on stage too).

From the taste of a forthcoming Push the Sky Away documentary, to hearing the forthcoming album live in its entirety (majestic, verging on disturbing, despite how drifting and slight some of it seems on the first few listens to my advance copy of the record), to ‘Stagger lee’, ‘Red Right Hand’, ‘Love Letter’ and beyond, tonight was about so much more than some blokes playing some songs on a fancy stage. In fact, it's so much more that I can’t even begin to fathom what it was, let alone deconstruct it in a meaningful way. And really, when it comes down to it, this humbling feeling and sense of awe is something you don’t feel too often in life, but it's everything rock'n'roll was designed for. So I just want to say thank you and fuck you, for reminding me how great a gig could be, and for ruining every gig from here on in...

"We needed a record which reflected h...