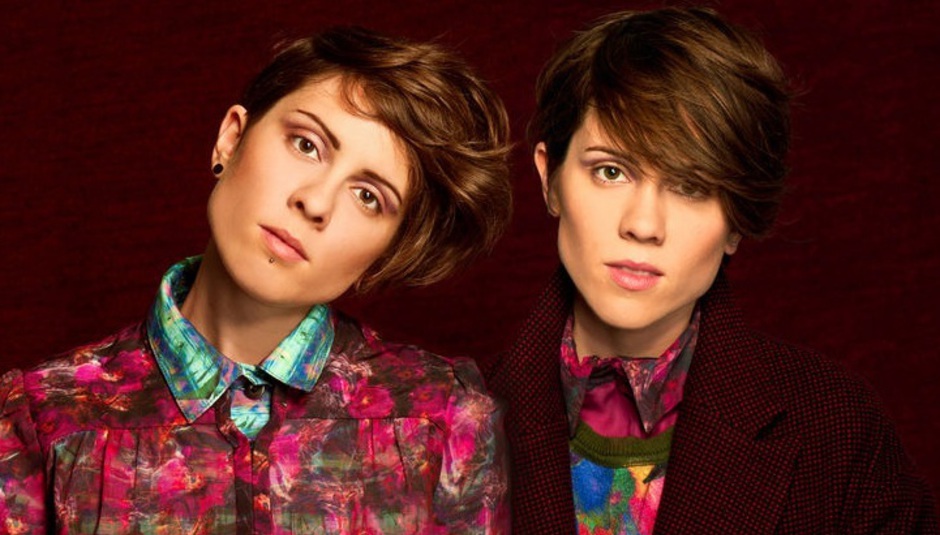 Seventh album Heartthrob isn’t just Tegan and Sara’s most focused and unified record – it’s also their best. Showcasing an iconic eighties electro-pop aesthetic with glittering results, Tegan and Sara have entered that inner ring of acts who make an unapologetic shift towards the mainstream, and come out sounding all the stronger and bolder for it. “Every band has their classic record” Tegan agrees, “A lot of our fans have already decided that we made our classic record – it was The Con, and that we’ll never be able to beat it… but for me, when we went into making this record, I thought ‘this is our classic Tegan and Sara record’”

2007’s The Con was a huge leap forward in maturity and ambition for Tegan and Sara, and the first definitive step on the path which led to Heartthrob. While earlier records were based around a spiky, plug-in-and-play guitar-centric sensibility, The Con saw the sisters opening their eyes to the textural possibilities of wider instrumentation, and experimental songwriting decisions. “I was building a lot of instrumentals, I was using a lot of found sounds, I was trying to use less chords, I was trying to use more picking parts, and layering ideas” explains Sara. “The Con was the first attempt at using the guitar as more of a textural instrument and less as a songwriting instrument, and the same with Sainthood”

But while the broader scope of The Con and Sainthood resulted in music far more adventurous than their earlier recordings, it also revealed the vast gulf between the songwriting approaches of the two sisters. “My songs were very specific sounding, and Tegan’s songs were very specific sounding, and with The Con and Sainthood Chris [Walla, the albums’ producer] really preserved that. In a way, that really built our confidence as songwriters: Tegan had a sound and an aesthetic, and so did I”, Sara explains. But there was room for concern that the sisters might evolve so independently of one another, that Tegan and Sara records could become disjointed along the fissure line of their songwriting styles. It was a concern that the sisters themselves shared, and wanted to address in the creation of Heartthrob.

“I was really worried about that”, admits Tegan. “We had a meeting really early on in the writing process with the chairman of our label and one of the issues that cropped up was that I thought we were two separate bands. I thought we needed to be more cohesive, but he was like ‘why?! Do whatever! Have two voices!’ But really it struck me as completely counter-intuitive. I think what holds this project together is the live show and the experience people have of us working together, and I think we needed a record which reflected how well we can work together”

For the first time, the sisters cultivated a stronger culture of collaboration and compromise during the creation process of Heartthrob – an approach which led to the sharper coherence of the record. “That [process] started for me when I said I wanted Sara to write on all of my songs”, explained Tegan. “She wrote on every single song, whether it was just a bridge or a melody or some lyrics, I just felt we needed more collaboration on the songs, and also that we needed to sing on all of each other’s songs. I thought that would be the first step towards creating a more cohesive Tegan and Sara sound”

Aside from this, Sara identifies the greater number of people working on Heartthrob as, perhaps paradoxically, also having contributed to the record’s sense of unity. “[In the past] we were working under the same umbrella of the same musicians and producers, and I don’t think we worried too much about whether it was going to sound cohesive or not. Whereas with this record, we were working with different producers and different musicians, and I kept thinking ‘Oh god – I don’t want this to be one of those records where everybody’s like ‘it feels like just a bunch of songs! It has no theme! It has nothing to tie it together!’’. And because we were focusing so much on that it’s now ended up being our most cohesive and coherent record”. The sisters admit that they’ve recently become more receptive to input and more disposed towards acting on feedback. And by entering into this spirit of collaboration, Heartthrob emerges as a far more coherent listen than what we might have heard had the sisters continued to stick purely to their own individual instincts from song to song, divorced from the opinions of their producer or bandmate. “That could have potentially been a weakness of Sainthood,” admits Tegan openly, “that there was such a wide, wide variety of types of songs”

The results on Heartthrob have surprised even the sisters themselves. “I think the production went way further than we ever thought it was going” says Tegan. “We were listening to a nearly finished version of ‘Closer’ and I was like ‘what are we doing?! It’s so crazy – it’s so upbeat!’” And undoubtedly, Heartthrob does stand apart as the band’s most unashamedly pop-focussed and accessible record, sporting ten songs all of which ready for radio, all sharing the same iconic, aural aesthetic of eighties electronica. But – for all its mainstream potential – it’s an aesthetic which still feels like a logical progression of the movement away from guitar-centric compositions explored across recent albums. “We weren’t like ‘fuck the guitar’, but we didn’t emphasise it”, says Sara. “I don’t think these songs needed guitar. Even when we tried adding guitar just for texture, I really resisted that because I just didn’t think they needed them – they really took the songs in a different direction. I’m so much more interested in the programming and synthetic elements”

Of course, with an album like Heartthrob and a lead single as brashly pulsating and catchy as ‘Closer’, the question of whether or not Tegan and Sara are actively aiming for a mainstream crossover is unavoidable. It’s refreshing to hear a band admitting without apology that they’re comfortable with broadening their audience, and that’s probably because any ambitions they do have in this direction clearly stem from positive motivations.

“I would have been really disappointed if we’d ended up with a record which didn’t help us achieve something new – whether that be artistically or professionally. I would have been significantly unhappy if this was another Sainthood record, or The Con 2.0. I didn’t want to do that. I wanted to talk to different people, I wanted to talk about something different, I wanted to force people to have to ask us about our process, as if it was the first time they were hearing us” explains Sara, highlighting how the mainstream-friendly sound emerges primarily from a desire to expand creatively and surprise their fans and collaborators. “With this record, I wanted people who were familiar with the demos to come in and be like ‘holy shit, what did you do!?”

And while Sara is eager to avoid being reduced to being defined by their sexuality (“One of the most irritating things people say to us is ‘I’m not gay, but I really like your band’. I’ve never walked up to a straight person and been like ‘you know, I’m not straight, but you make a mean ravioli”), she agrees when Tegan cites a benefit to mainstream crossover as being that they can help to diversify the pop mainstream as successful gay women. “I want to have people like me in the mainstream to look up to”, she says, “and for our audience to have that. Every time we get more popular we prove that you can do anything even if you are queer – we help change, and fight the resistance. I think it would be sad, it would be a disservice to ourselves and our community and culture, to keep ourselves away from the mainstream”

It becomes clear that the sisters aren’t exactly consciously striving for the mainstream – it’s more that they’re uninterested in actively resisting a crossover should it arise organically. It’s for this reason that half-expected cynicism or cat calls of ‘sell-out’ from critics and fans hasn’t materialised in response to Heartthrob. Flowing from a desire to expand upon previous achievements while incorporating a stronger sense of collaboration, Heartthrob melts the division between the two sisters as disparate songwriters (they have close friends who can’t tell which sister wrote which song, Tegan proudly admits) and distils their recent guitar-less experimentation into a sharply defined identity. “It’s ten songs”, Tegan says, “they’re succinct and perfect – and this is the record where you don’t skip a track”. And she’s right. Heartthrob is the classic Tegan and Sara record – an album which proves that accessibility and creativity can cohere into earnest, powerful, lovelorn pop music, completely deserving of the crossover success which it’ll undoubtedly enjoy.

Heartthrob is out now.

In Photos: Wave Machines @ The Scala,...

Push Every Other Band Away: Nick Cave...