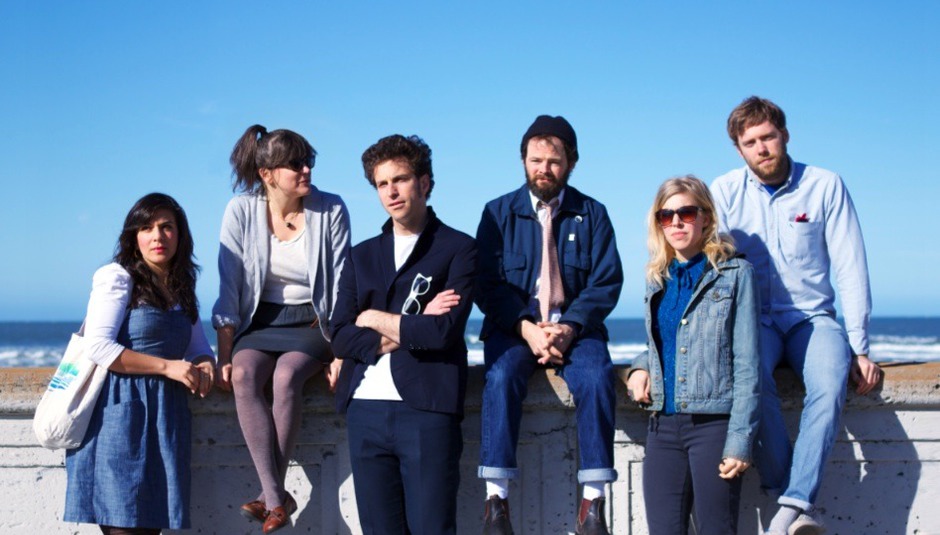 Still Flyin’ come from San Francisco and want to bring you the jams, make you dance, place you on the pedestal of indie king as you writhe to their knowingly-coy reggae pop. Or at least that’s what you’d think if you heard their debut, Never Gonna’ Touch The Ground. Released in 2009, following a wave of live shows and up to 15 performers on stage, they embodied a good time – and everyone loves a good time.

Having just released their follow up On A Bedroom Wall (reviewed here), the band has a different focus. They’re still led and composed by the pop explosions of Sean Rawls but the party jams have gone, instead there’s a frank engagement with reality and a discussion on art and commerce. Where and how do they sit together, and what happens to those who dare to take on the challenge? Its upbeat tempo is undeniable, the energy still invigorating but Sean’s melodies also paint a large, over saturated, dusk that beams the inherent beauty in accepting that, hey, everything has an end. As a result On A Bedroom Wall is a stunning pop album. Talking to Sean on the album’s creation it’s clear that beautiful things rarely stem from unabashed happiness.

Having moved from Athens, Georgia and your former musical outlets (Je Suis France, Master of the Hemisphere) to San Francisco; to me ‘Never Gonna Touch the Ground’ is evokes San Francisco as fun and eccentric. With ‘On A Bedroom Wall’ San Francisco now feels like a more somber, wistful place. Did you move there for your music and as a place does it influence you?

My move to San Francisco didn't have that much to do with music and more to do with what I've been conditioned to do all my life. I grew up a military brat and moved around every two to four years my entire life. I'd been to San Francisco a few times on tour, liked it a lot and at that point had lived in Athens, Georgia longer than anywhere else in my life so I just felt this tremendous need to go somewhere else that was far away. When I moved to San Francisco I had no intention of starting another band and my obsession with a joke reggae song I'd written while in Je Suis France eventually turned into a full-fledged joke reggae band in San Francisco, which over the years has morphed into something entirely different.

So really, San Francisco as a city didn't influence the album at all musically?

But my life here influenced the lyrics a lot. A lot of the songs have to do with the city itself or my neighborhood. I live on Alabama Street, for instance. And ‘Jacket In July’ is directly referencing how cold it is in the summer here.

I guess if you want a musical influence it’s a different kind. There's a karaoke dude named DJ Purple who has a night at a dive bar near my house and we go over there a lot. He runs his night like a DJ - only playing songs that fit well together - and he mixes each song individually and also blazes some live sax solos on top. It's really great.

I went into this album wanting to have songs that people would want to sing karaoke to. That was a goal - to have something that universal and infectious. I should ask him to make a karaoke version of one of our songs so I can sing it at his night. He's a big Still Flyin fan so he'd probably do it. That would be pretty mega.

DJ Purple sounds like something typical of San Franciso, that slight twist on convention. So if San Francisco wasn’t a musical influence per se, what was going through your mind as you prepared to record the second album? I think that for many artists the most exciting aspect of an album is immediately prior to its conception when there are literally endless possibilities. Did you have any criteria that had to be met?

Well I couldn't wait to make another record. This time my goal was to have an album with ten songs that were all very very good and consistent with each other. I think we definitely succeeded in that regard. I love the album so much and am proud to have been able to make something as good as this.

You're totally right in that the endless possibilities of the next record are so freeing and fun to daydream about. For me though, what comes out of me often isn't what I set out to do. A lot has been said about the 80's new romantic tics of our record and how there's this 80's revival that's happening. I understand that, but it can take years for me to finish a song - I'll usually have over fifty in various stages of development - and some of this album was written as far back as 2008.

I remember writing emails to the band describing the new songs as "kinda melancholic 80's mainstream pop songs", and at the time I was very surprised at these tunes that were coming out of me. This was before any 80's trend was happening. I'm not sure if it's better or worse to do something trendy. Aside from the overall high level of consistency in the songs, I wanted lots of complimentary drum machine parts and rototoms blended on top of acoustic drums. I wanted synth layering. I wanted no horns and much less of the children's choir group vocal aspect of the first record.

Ultimately too, the biggest thing on my mind was the possibility of this being the last record I ever make. My wife and I made an agreement that we would make the band the main priority for a certain amount of time before the focus would shift to starting a family.

The deal was that when the family phase began, the relentless touring would have to stop unless I was making a lot of money doing it. I knew that was unlikely and to me that meant there was a strong chance this could be my last record. I had done the party band thing; this time I wanted to make something that meant a lot to me personally. There's still a lot of fun and funny stuff going on, but for the first time there's also some extremely personal and serious lyrics that were probably a result of the strong emotion of realizing that doing what I love to do was going to have to stop soon.

But right now you’re getting albums out and managing to tour. How easy is recording for a band as large as yours as all your members are disparate and often tied to other musical projects?

People flew in to record - it was pretty official and well planned. Recording is always pretty excruciating for me and for a lot of people I know. Nothing makes me feel as inadequate as recording. I feel like we're a pretty great live band, but in the studio I can never play or sing good enough.

We recorded the album at this humongous studio in Sacramento called the Hangar. It has several rooms, one of which has a full halfpipe in it. There's also a quarterpipe in the main tracking room. I'm talking about skateboard ramps. All of us used to skate as kids so naturally we couldn't keep ourselves off of those ramps. I've never been so bruised in my life. I think I cracked a few ribs actually.

I also, as regards criteria, wanted us to wear our work clothes while recording, like making the album was our job. I work as a law clerk, so I was wearing business casual all the time and riding a skateboard everywhere. Overall it was really fun and frustrating at the same time. We recorded all the basic tracks and some vocals and synths at the Hangar and then did more overdubs at our keyboard player Maria's house.

During the overdub stage I listened to nothing but Cyndi Lauper's ‘She's So Unusual’. Nothing else. I know I'm not even a tenth of the singer that she is but I really wanted that unhinged quality to seep into my vocal takes. I was having such a hard time singing good technically with rhythm and pitch while singing unhinged at the same time. So the last night of recording I made myself get incredibly drunk to get the unhinged vibe and just sang with complete abandon. A lot of that ended up on the album, although it still doesn't sound very unhinged!

Well... we still don't make money on tour. Part of that is due to our size, but at this point we've cut the touring lineup down to six people. Six is still a lot but we don't tour with a driver or tour manager and usually not a sound mixer either. So a six person touring party is pretty normal size for a touring indie band. The reviews I've seen seem to generally be quite good, which is great, but there's not enough press I guess. Not enough people at the shows.

We love our fans so much though. I'm sure we have more fun playing to thirty people in Vienna than most bands have to playing to three hundred people. The crowd response to our live show is often overwhelming. It can be disconcerting to tour so many times and to still have shows where there's no one there, but somehow pretty much every time we play, even to no one, it ends up being such a great feeling. Out of all the bands I've played in over the years, nothing has ever felt like this one when we play. That's why we keep doing it.

So will you be able to carry on after this, say in a year or a couple of years time?

A year from now I'd love to be about to go play some summer festivals and I'd also love to have a new album ready to record. But I honestly don't know what's going to happen. I'm not making enough money and I need to provide for my family. It's almost impossible to find a respectable job that allows you to leave to go on tour. But, you know, I'm not sure if I can stop playing music, so maybe something will work out. Maybe this album will slow burn it's way to massive success! Or maybe I'll do something different. The future is completely unknown to me.