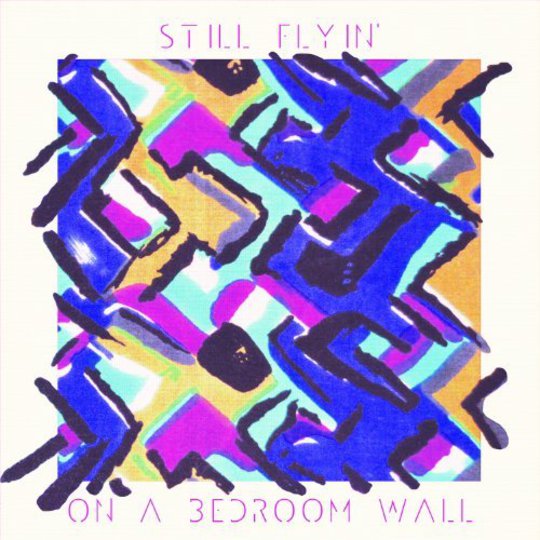 Still Flyin’ have it down. Fronted by Sean Rawlins, Still Flyin’ tell the story of Sean’s migration from Georgia and his past life in established bands Je Suis France and Masters of The Hemisphere, to a new life in San Francisco and a break from the duress of playing music with professional aspirations.

So Still Flyin’ are a party band. Their debut show was as a 15 member plus reggae band. The good times that the band partied out on stage saw them tour Europe with a debut album (Never Gonna Touch The Ground) and find themselves associated with other sunshine troupes such as Architecture in Helsinki and The Polyphonic Spree.

For album two it all starts to get serious again. From A Bedroom Wall paints a glorious colour wheel of day-glo neon pop sounds and melancholy melodies. There’s enough interesting, Eighties influenced, sounds to be ‘on trend’ (even to be a sincere homage to the era), whilst the vocals have the hurt inflection of Jens Lekman. It’s the perfect mesh.

As it opens with ‘Elsie Dormer’ the prolonged build before a word is pronounced gives an ascent to warrant New Order comparisons and euphoric dance gestures.

First single ‘Travelling Man’ is a literal expression of the push and pull of stretching for success without wanting to unearth the foundations: “Lord I was born a travelling man/Half of me is good, the other sad. This waiting in silence, we’ve lost our springtime/This standing on one leg, feels like a lifetime.” There’s anguish aplenty, supported by twinkled keyboard lines before the chorus sprints into emphasised drum triplets and ghostly backing vocals. Female harmonies (provided by Sean’s wife and fellow band member Mindy Schweitzer-Rawls) add a playful boy-girl interexchange, even as the melodies twist in insecurity.

‘Big Trouble In Little Alabama’ is overt joy whilst current single ‘Spirits’ (apparently recorded for a delayed/binned horror flick) threads a series of keyboard and guitar riffs under Rawlins’s decrees of “One ghost is not enough… You want to see the world/Without touching it,” whilst sounding not unlike David Byrne. As he outlines his rationale for haunting as a pair in an act of love, his constant stretching toward the unreachable again surfaces.

There are overt reggae moments of old and much of the bass lines and rhythms, though more motorik, still bounce across octaves and swing. On A Bedroom Wall is an album founded upon European insecurity and masked with American good time vibes for balance. Its impact is its conflicts and depth of emotion, akin to Metronomy’s Nights Out or even the way Morrissey made sarcasm a form of terrace poetry (the Morrissey-Orange Juice style mesh in ‘Camouflage Detection’ is musically perfect). Rawlins and his assembled musicians are masters of exploring conflict and On A Bedroom Wall makes clear that the party is once more over, the come down has painfully dawned and the struggle is on display for all to hear.

This album may not be bigger than its predecessors, but hopefully Rawlins he may get enough attention to send him on the road again.

With an album as touching as this, we’re put in his predicament; attempt to build on something that may indeed be unsurpassable or leave it behind and try something else with all the energy of a new project. On A Bedroom Wall is a work of music that won’t be matched this year for its pained beauty.