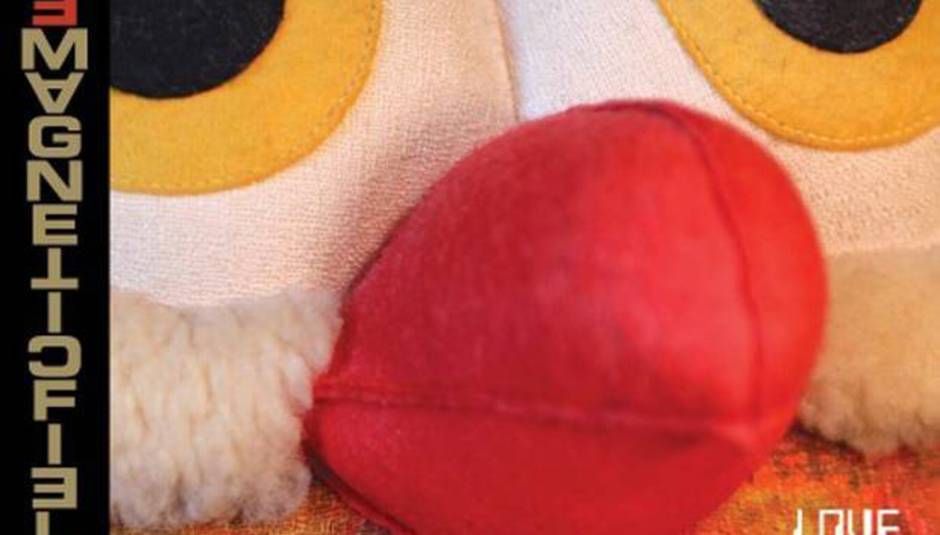 No one captures the ecstasy of romantic torment quite like The Magnetic Fields. And though there is no better song to sing after a right royal dumping than ‘I Don’t Want To Get Over You,’ ‘Quick’ is about still being in a thing - but close to ending it. And how you sometimes just want to say, I AM A WHISKER AWAY FROM BINNING YOU, SUNSHINE. The fact that it chimes like Buggles and is just as sad makes it all the more smirky and joyous, with Merritt pondering how life’s Ts and Cs (not least: rent) will insist on getting in the way of a person’s romantic exit strategy. I mean, to be this prodigious and stylistically liquid; to be capable of telling stories where each of his many – perfectly drawn - narrators gets their own bespoke, musical costume, must be pretty galling if you too make your trade from a six-string. If I was a musician, I’m pretty sure I’d hate him. Even if ‘Quick’ is essentially Bouncy’s ‘Irreplaceable’ cept more indie.

An absolutely bum-blowing bassline introduces MC Elliott Egerton’s third single - and though it would be pointless asking the old lady with the Laura Ashley wallpaper what ‘Fars Yer Whop’ actually means, for the purposes of this single all you need to know is that he is flat-out furious and arrestingly good - lyrically deft and that rare beast; a real-life, non-caricatured Scouser. The only sticking point was when I read that the vocodered chorus (which you should probably just fight through) is meant both as tribute and pisstake. Which just seems a little cake and eat it, as if Bang On! were basking in applause at the same time as winking slyly to his audience. Or maybe not, maybe it's okay. Either way, if I could pull off telling you that I think the main thing worth getting really, really excited about here is Egerton’s flow, I would. (It is, though.)

Obviously nobody needs another distort-pop single that is glimmering dejectedly under a cheap mirrorball that has just been dumped by the prom queen. I mean, I, for one, am fed up with wheeling out metaphors involving hooky punch, bleached-out yearbook photos capturing things they shouldn't, corsages with mud on them, or wearing the jacket of a boy named Brad. But still, I quite like 'When I See You Again', because as well as being a single that is doing arms-length sway-dancing in its Daddy’s too-big tuxedo, Shimmering Stars have seen to add some unnecessary whomps and crashes that put me in mind of that episode of This American Life, where they tell the story of the high school dance that carried blithely on even though the whole time they were dancing, the rest of the town was being ripped apart by a tornado. Basically, right, what I’m saying, is that if you imagine that the kids at that prom are dancing to this single in some sort of wreckage, it suddenly makes it - and prom-rock in general - about 10% more interesting. As if the self-regarding younglings inside the gym, are about to get a lesson in the peril and threat outside it.

As little is as likely to put a person off a thing than seeing it has been named ‘Q’ ‘track’ of the day; and as the world does not contain foam hands big enough to form air quotes as sarcastic as the ones I want to demonstrate whenever I see the word ‘track’ (so vile, so deeply, deeply vile), let us instead see how many results can be pulled back from Google if a person was to enter “DZ Deathrays” and “Pulled Apart By Horses” if only because I am curious to see if this side-by-siding is in fact deserved, or merely PR-spun. By my calculation, we have an alarming 668,000 mentions - even if you ask Google to remove results based on quotes I know are in the press release. Which is not bad going, if that, indeed, is what the team behind DZ Deathrays are going for. ‘Dollar Chills’ itself reveals that they’re not quite in the same ballpark of filth as my beloved Leeds bad 'uns, but it's not far off. Good.

I am interested less in obvious, spoken nasties than the things we think we're allowed to say - and not least, how often you hear people talking about ‘estates’ as if they were not peopled by people at all. Buying an over-priced flat near one (SO BRAVE), walking by them (POOR YOU), it’s odd how often you hear this kind of thing tossed off as if it were acceptable. And let's face it, it's usually the preserve of the kind of fist-gnawing wanker who bangs on about what an amazing sense of community exists in Hackney despite not knowing a single person born there. ANYWAY, I mention all this because Skitz has done an excellent video for his bristling single which has animated eyes peeking out from lurking hoods, and I wonder if that’s (at least part) of what it's about. PLUS it’s got Roots Manuva in it, scene-stealing like an old repertory ham. Basically I like everything about this enterprise, especially the bit where Rodney P goes on about being an actual socialist and says 'Fuck Barack'. Oh alright, I was a bit shocked.

The habsolute worst and dreadest thing about people knowing that you review bands is that occasionally people send you their music and tell you they live in the same place as if it would automatically endear them to you. And every time it happens I want to say, you know, how could this ever be a good idea; and how could anyone, ever, have anything even vaguely approaching a natural or honest response to a piece of art when they know how likely it is that they will bump into the people who made the art while buying a pie in Morrisons. I mean, the whole thing is so anti, so fraught with upset, especially when people will insist on forcing me to remember that the music I am paid to be a smart arse about has been made by people with actual feelings. Oh, I can’t bear it. Don’t tell me where you’re from; let all bands be from a parallel universe peopled by souls with the blood of neon and trousers spun from unicorn's tears, okay, THAT’S WHAT I WANT. As it happens, Fever Fever are from Norwich (OMG! Where I live!), but they were not all HELLO WE ARE NORWICH or all up in my face about being human, and I like their single in part because it is possible for me to listen to it without it being reminded of something so pedestrian as a map location. It may in fact transcend the map, and it’s great because it’s all scuffed and ragged. But also because they’ve harnessed the scuff alongside some impossibly sugary vocal lines; ones that dance in and out, all surprise. It’s like a muddy boot, laced with ribbons. No, it’s a marshmallow, rolled in skag. No, it’s [time I went on holiday].

Virals - ‘Coming Up With The Sun’ (Tough Love)

Virals is him out of Lovvers and on ‘Coming Up With The Sun’ there is a fair amount of old-fashioned, Bob Mould-style jangling going on. It also sounds a bit like Ash. Neither of these are necessarily bad things. Bit too perky for me though.

Magic Bullets - ‘Unlearned’ from ‘Much Ado About’ EP (Mon Amie)


‘Nobody ever tells me anything!’ is the vanguard cry of we youngest children, family secrets are forever being whispered into slimline BT handsets and you have no idea, no fucking clue what is going on until your Mum comes to pick you up from school one day and you find out that Uncle Dan has done a runner with the pension and Aunty Margaret does stuff for money and your cousin's in borstal but it’s okay now, we didn’t want to worry you. What this meant, at least for me, is that I spent the whole of my teenage years pestering the whole of my family for attention, needy as all heckins, unplugging my Boots tape deck and smacking it down in front of any family member I could find until someone, finally, would listen to the stuff I had found on the radio, BECAUSE IT WAS IMPORTANT. But they never would, and I was swatted and foiled; and it was more fool those fuckers because they missed out on so many bands. Then I heard ‘Blister In The Sun’ leaking out from under my sister’s bedroom door and thought, ‘Well, this is exactly what I am TALKING about, people are even GETTING INTO BANDS I have never heard of WITHOUT TELLING ME.’ Although mainly, really, I was jealous. Anyway, that’s the time, that’s the moment, ‘Unlearned’ put me in mind of. That and early R.E.M. It is no small irony that I am only just noticing Magic Bullets – the people, the band - as they decide to all it a day. This is their last release. Why does nobody ever tell me anything?

At the margins of everybody’s taste, far away from the strait-jacketed, internet-ready, socially acceptable face one presents to the world through such insightful, totally genuine, utterly trustworthy and definitely meaningful, modern means as Facebook Likes, Twitter photo streams and the About Me section of any of wor pointless, one-note blogs, there are other fancies. Sick ones, ones where you find yourself wishing for your time again so you could do this rock thing properly and wear leather at fifteen, instead of wearing it at an age when, quite frankly, it starts to look a bit German Top Shelf. Anyway, Band of Skulls are – check this out for criticism, you shits – quite rock. And I like them and I do secretly want to be a bit rock with a capital R and I don’t care who knows it, I just wouldn’t shout about it on Match.com.

Wendy is on the internet, here. If you want irrefutable evidence that romance is dead, do have a listen to Rizzle Kicks and Mayor Hawthorne on their amusing new single, which is also out today. ‘I wish I had played you like the whore you are,’ they sing. Lovely!