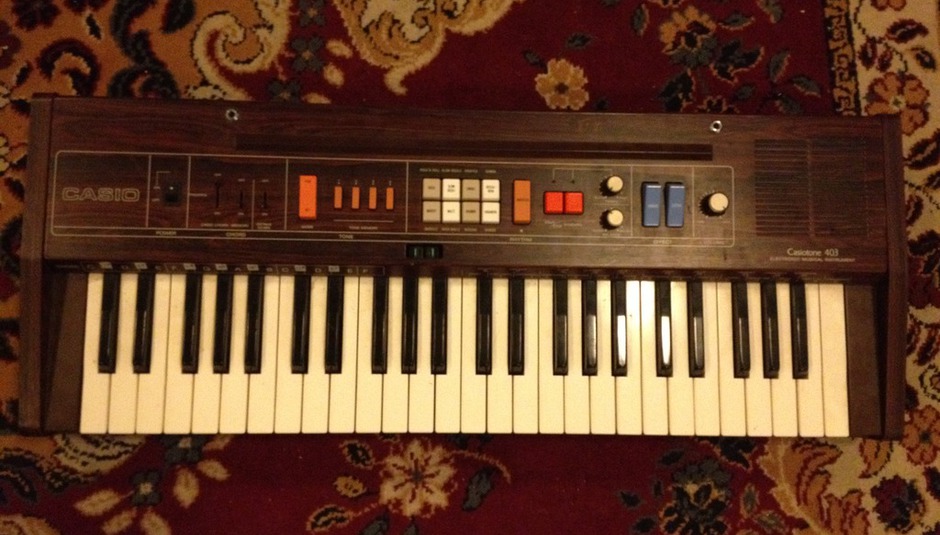 'Planet Gear' is an irregular feature on DiS, in which we ask musicians to get a bit geeky and talk us through the equipment that makes the 'magic' happen... Here, Brian from Sleep Party People talks us through the recording of their forthcoming album 'We Were Drifting On A Sad Song'.

During this recording process I was very much into old analog instruments and organic soundscapes instead of using midi-keys and programmed beats from my computer. I was looking for a warmer sound and the approach had to be different on this album than on my first album. This time I wanted several of my good friends to join in and help me create the album I was looking for. Here's a nerdy description of what instruments I used and how I used them.

These keyboards all have their own signature sound, but I couldn't settle for their own sound, so I ran them all through some guitar pedals and a Fender Bassman amp to give them a more ambient and mellow sound. Absolutely adore how you can manipulate and create new sounds by running them through guitar pedals. All these keyboards sounds like the Blade Runner soundtrack. This Andreas Christensen pianette from 1931 is my dearest and most precious instrument I own. I bought it several years ago after I instantly fell in love with it. It's almost as if the piano lives and has a soul, because the sound it creates is unique, old, moody, mellow and heart-warming at the same time. Absolutely love the sound and I couldn't imagine making a record without it. This board contains some of the pedals I used on the album. Huge fan of the Electro-Harmonix Memory Man. Nothing much to say other than I can recommend every single pedal in this board. When I create electronic beats I use my Roland TR-505 Rhythm Composer. Maybe not the best sounding drum machine on the market, but I still love playing on it. It has very classic electronic drum sounds and also some very corny ones but in my opinion some very useful drum sounds. I used it a lot on my first album but on this new one I only used it a few times. As I mentioned earlier, I was more focused on getting acoustic drums recorded. When I write and work on songs before I record them, I often write stuff on my pianette or on my acoustic guitar. Please say hi to my one and only lovable acoustic guitar, the Kasuga. This is actually my Dad's guitar from when he was young back in the 70's. It was handmade back in the 70's and the sound is pretty similar to the Martin guitars from that same period. It sounds absolutely amazing. I got it for my 18th birthday from my dad. The best gift ever. The funny thing is that I never really include the guitar on my albums, although I write most of the songs on it. I often use the guitar as a bass-sounding-instrument. I love manipulating it and make it sound like a bass or a high-strung guitar. This album contains a lot of electric guitars but often I want the guitars to sound more like a keyboard. These two guitars are the ones that made it on the album. The Fender Stratocaster is custom-made with P90 pickups and a Bigsby - a very heavy sounding guitar. The Fender Jazzmaster is my absolute favorite guitar. It's from 1963 and its sound is out of this world. Love it. A lot of people ask me how I made the vocal sound on the albums and I've never really been honest about it and maybe I never will be. Maybe it should be a secret how I make the sound but I can show you my "secret" board including every ingredient. Have a look. Not that complicated if you ask me. This Ibanez Harmonics Delay HD 1500 has been my friend since 1999. Earlier, I ran my guitar through it, but recently I experienced another great thing about this wonderful machine. It's really suitable for vocals as well. The tape delay sounds amazing and so does the chorus. Used it a lot on this recent album. My workstation includes an iMac 27' which gives me the overview I need when I mix. I work in Pro Tools 9 and I must admit that I could never imagine working with anything other than Pro Tools. One of the most interesting instruments ever is the Omnichord. I love using its harp sound while adding reverb and delay. So dreamy. I ran this Omnichord through an Eventide H7600. I simply can't get enough of the Eventide. It blows my mind every time I use it. The panning fx is unbelievable. (the picture of the Eventide isn't mine, because I didn't have it at home when I took the pictures). But I can highly recommend every soundscaping nerdy dude or dudies out there to go look for this Eventide machine. It will literally blow your mind. We Were Drifting On A Sad Song is out on Monday 9th April. You can preorder the album here