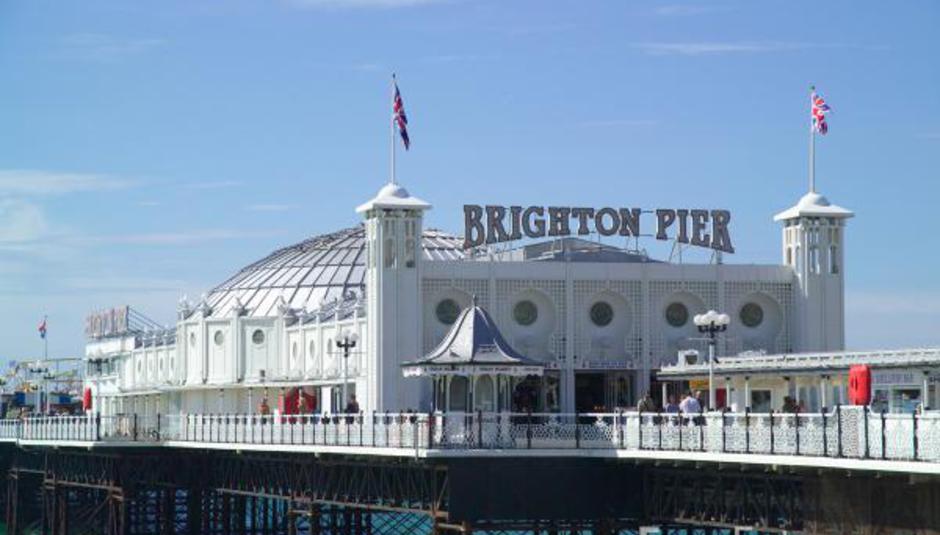 It’s January and there is a little gloom on the horizon: Brighton is home to two of the UK's most well known and much loved independent records shops, namely Resident (voted best independent record shop in England 2011) and Rounder Records. Aside from these, there is the lesser known Edge World that resides in a loft space above another shop in the North Laine. With a clearance sale on, it looks like it could be the end of an era for this vinyl specialist shop or could there be another captain to jump in and keep the boat a peddling?

The Green Door Store never seems to close its doors and has plenty to jump and down for over these Winter months. For a start there are a number of interesting looking gigs put on by super cool promoter Be Nothing. There’s the ravey synth freak out of Teengirl Fantasy with Regal Safari on 29 January, the cat loving melodic electronics of High Places on 13 February (you can read their DiS interview here) and the moody layered sounds of S.C.U.M. on 21 February. Other highlights include Chicago instrumentalist Owen who formerly played with bands like Cap'n Jazz, Joan of Arc and Owls doing his thing on 2 February and the triangular oOooOO on 5 February.

And that’s just the Winter months, in Spring time the GDS looks to be starting a new bimonthly event that promises 12 hours of musicalness containing up to 7 bands at time. Galvanize.

Sticky Mike’s Frog bar keeps on evolving and downstairs in the live music area is the addition of a homely lounge looking area with sofas and plants, look out for curtains, coming soon. In the meantime here are some of their early 2012 highlights: On 3 February there is a a tribute night to legendary hip hopper J Dilla, best known for his work with A Tribe Called Quest, De La Soul, Busta Rhymes and Common. In his absence expect his mom to show up along with Ma Jukes, Phat Cat and DJ Spin Doctor. There is also a gig featuring local post punkers Shrag play with experimental guitar noiseists Tunabunny that tickle Duchess Says! to own the genre ‘weirdo rock’ on 23 February and then there is London electropop party time trio We Have Band on 25 February reminding us of the release of their second full lengther ‘Ternion’.

It’s January and there is no gloom on the horizon, only Seamonsters, this is Brighton after all. Promoter and record label One Inch Badge marks the start of the new year with another Seamonsters festival, but this is 2012 and this time the monster is more ferocious. This water spouting, multi armed beast now spans 6 days starting with 23 January and ending on 28 January. It shows off some of Brighton’s best musical talents starting with the harrowing guitar twinklings of Sons of Noel & Adrian on Monday, then onto lo-fi gazers Fear of Men on Tuesday, featuring the detuned minimal dirge of I’m Being Good, on Wednesday, beefing up Thursday with the epic sounding indie band Munich, then Friday sees Doors/Pink Floyd influenced Restlesslist take to the stage. Saturday’s Sea Monsters ends it’s roll call with playful dreampopsters Us Baby Bones supporting the melodic guitar magics of Tall Ships. Overload? Take e bit size option with the Sea Monsters 2 compilation to accompany the festival and it comes free with the 6 days pass. If you prefer there are also single entry tickets too.

And if one music festival wasn’t enough, ferociously independent Melting Vinyl puts on a series of gigs dedicated to all things french with ‘Viva La France’ 26-28 January. This event includes a celebration of french food, film and most of all sweet music from the likes of the thoughtful musical imaginations of 4 piece Francois & the Atlas Mountains on Thursday, the femme noir of Phoebe Killdeer & the Straws on Friday and ending on Saturday at the GDS with club night L’Amour Electronique.

Ever wondered what happens when you leave a band like The Dears? Montreal musician Jon Cohen actually did that and wrote some new songs as evidence. Now he is about to embark on a huge European tour as part of his solo project entitled The Jon Cohen Experiment he will be surfing into Brighton on 25 January at the Latest Music bar with his brand of hypnotic folk psychedelia.

After recovering from the Green Door Store’s 1st birthday party at the beginning of the year The Sticks, with their blend of angular garage rock, are concentrating on finishing an LP for Upset the Rhythm that proceeds a tape of improvised ditties and swap around jams that will be released eminently on obscure Japanese label Sixteen Tamborines.

Another local band, Saint Coltrane bring out their debut single release the hardcore ‘Iron Dracula’ which turns out to be a limited edition split 7” with Weird Wives’ ‘Gila’, featuring members of Surfer Blood. Out on bedroom based Enjoyment records this release comes in a variety of colours and digital b-side downloads.

Half Brighton, half London team Peepholes have finally released their mini debut album Caligula, it contains their signature warbling synthetic explorations into sound and is produced by Shelley Ostapovitch, best known for her involvement with Throbbing Gristle and Hidden Cameras, but also, of late, South London fem punkers Trash Kit and the twistedly out there drum wickedness of Maria and the Mirrors. This album must have left Peepholes with a buzz, as they are already two thirds through the recording for their second installment due later this year.

Fat Cat has many plans for the year ahead seeing as 2012 equals their 15th birthday. To get things going they will be releasing alternative 80s inspired Twilight Sad LP No One Can Ever Know on 6 February, followed by the single 'Handle Bars' from surf guitar punk Odonis Odonis on 13 February. There is also expected to be a single release from the jangly upbeat Maps and Atlases on 20 February. Aside from that FC will be relaunching their demo site very shortly, in the mean time you can listen to a selection of their bet submissions form 2011. Could some of these artists form part of the labels new signings for 2012?

Love Thy Neighbour continues to put on interesting around Brighton. Recently they put on a show that supported Woman’s Hour (think a more guitar orientated XX) in promoting their latest 7” Dirty Bingo Records single release ‘Jenni/Human’ - produced by Richard Formby of Wild Beasts fame. Future LTN shows include psych folk double bassist Nat Baldwin. In the past he has played with Dirty Projectors and collaborated with Grizzly Bear and Vampire Weekend, he will be all good and present on 30 January at the Hope. Also LTN is collaborating with ingeniously innovative music catalogger Upset the Rhythm makes the journey down South with it’s triple header Kingdom, tour on 3 February at the GDS to showcase some of its more recent artists including Way Through, Gentle Friendly and Peepholes. Then on 15 February they bring the Errors to the seaside.