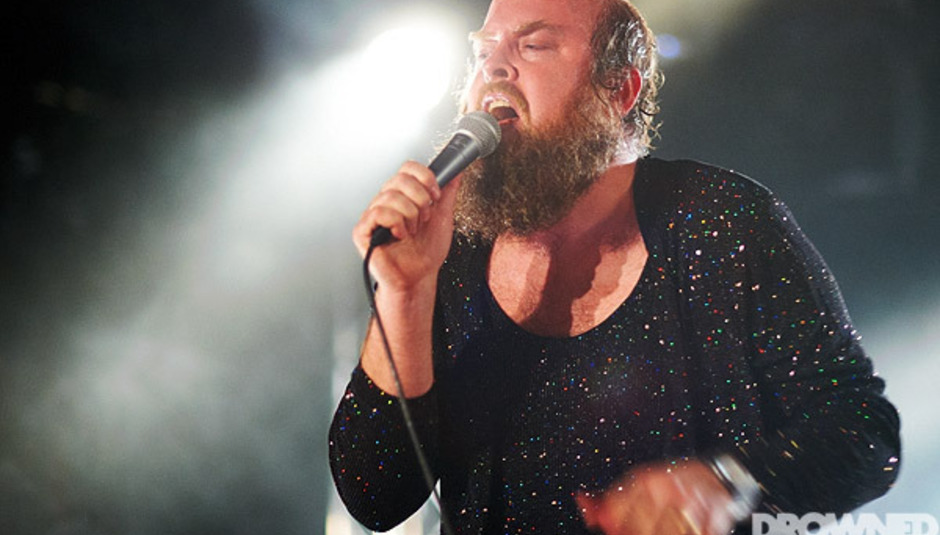 A weekend spent at Butlins, in Minehead in early December certainly sounds like the stuff that nightmares are made of but fortunately in the hands of the boys and girls of All Tomorrow’s Parties, the Nightmare Before Christmas was anything but. No, that title goes exclusively to the journey back and the return to reality that followed. Fortunately, Alex Baker and Christopher Alcock are only going to talk about the good bit of their trip.

Arriving late on Friday, amidst a blur of lager and supermarket own-brand whiskey-tinged weariness, ATP NBC’s Friday instalment, curated by Les Savy Fav, seems but a vague dream of loud guitars, shouty vocalists and one striking image – that of LSF’s Tim Harrington resplendent in a spray-on silver gimp suit and surrounded by a halo of glitter. Like a camp Norse god, his performance – purportedly one of LSF’s last – was one of the highlights of the festival. And that's high praise indeed, coming from someone who doesn’t even like Les Savy Fav. Striding across the stage, diving into the crowd and ripping off his attire at least twice before starting it all over again, he captured the essence of everything a front man should be. Rest of the band weren’t bad either. (AB)

Wild Flag start their set with some unconvincing, slightly limp pop songs, but as they continue into more involved, Television-esque noodle guitar wig-outs things become a lot more fun, the more intricate format doing justice to their versatility and lightness of touch as musicians. The three part vocal arrangements on 'Glass Tambourine' are a highlight, harmonised looped phrases in the backing with a Carrie Browstein’s gruff lead declaimed over them. (CA)

Whilst their show in London a few days previous seemed more comical and artily dancey, in front of an up-for-it ATP Friday night, Oxes’ squall of gnarly, mathematically augmented riffage really slams home more viscerally. That’s not to say that they are po-faced – drummer Chrisopher Freeland still spends a while trying to organise an impromptu photo session with the front row of the crowd - but there’s more purpose to their churning guitars and their slipping between and recontextualising of rhythms. (CA)

You just don’t get front men like Future Islands' Samuel Herring. Not in indie bands, not in electronic pop bands. No one puts so much guttural emotion into every fucking note, from hammed dramatic growls to his rich, soulful croon. The backing is engaging electro pop akin to New Order and The Cure, at its most powerful pistoning at half speed. Hyperballads indeed, they are, in Herring’s words “slow pretty jams for the slow pretty people”. The contrast between the plasticness of the backings and the raw humanity of his voice creates some kind of timeless retro futurism, ripe for future generations to pore over. (CA)

Holy Fuck take the typical experimental electronica set up of two blokes facing eachother over a table of FX and keyboards and marry it with an exceptionally tight rhythm section to create a bouncy, driven kraut-disco space. Despite squandering some of the most enervating build-ups on the weekend on what turn out to be their songs’ endings, it's still immensely satisfying display of what can be made of dance music with a little lateral thinking. (CA) Like each of the three curators, Battles played twice on their designated day, and the difference between the two performances couldn’t have been more marked. Their ‘morning’ slot at 2:30pm was a shambles. From the visuals, to the music, to the admirable effort of the band to physically hold themselves together, the performance reeked of the previous night’s festivities. Meekly mumbling an apology for how hungover they were, all was nonetheless forgiven as their puffy dull eyes reflected a countless number of equally tired and blank expressions staring right back.

A few hours of drinking, showering and eating later, the trio returned to the stage as different men. With their newfound energy and rediscovered musical ability, the performance bubbled and hissed, matched only by a now exuberant crowd. Playing material from their first album for seemingly the first time since Tyondai Braxton departed for pastures new, it was ‘Atlas’ which set the tone for the rest of the evening and woke the entire festival up from the pleasant wooze that the day’s previous acts had inspired. (AB)

Having not really paid attention to Gary Numan’s output since his Eighties heyday, his performance on Saturday came as something of a surprise. Still appearing, at a distance at least, as baby-faced as ever, the music which emanated from the stage was anything but. Having consigned the playful and fun electro to the proverbial scrapheap, Numan’s show was heavy, loud, industrial and gothic. Even the appearance of ‘Cars’ did nothing to remind one of the awkward and charming man who had once taken the world by storm and brought electro to Top of the Pops. His pale complexion and shocking black hair, combined with a band comprised of baddies from Zoolander (the bassist in particular looked like the evil DJ of breakdance-fighting fame), with the cheesy gothic backdrop of the music seems like a regression of sorts. While evolving and growing are completely necessary if you want to release music over a period of three decades, does it really have to be so, well… emo? (AB)

Elsewhere, Walls’ set to kick things off in Reds was the perfect way to follow up the accentuated hangover which was Battles’ first performance of the day. The soft and dreamy electronica, in particular ‘Sunporch’ off of their latest album Coracle, soothed almost as much as it impressed. The Field, who immediately followed were not quite as impressive but managed to lull the crowd into a trance, with Axel Willner’s live band set up playing hits off of From Here We Go Sublime as well as the recent and much lauded Looping State of Mind. Flying Lotus - better known as the happiest DJ who has ever lived - impressed with his bass-heavy and glitchy set, his delightfully American interjections and THAT smile. Matias Aguayo brought an end to Kompakt’s dominance of Reds on the Saturday, and the Afro-Latin beat throughout managed to elicit some dancing for the first time. He finished his set with the excellent ‘Rollerskater’ from his album Ay Ay Ay, taking the mic for vocals and ending the night perfectly. (AB) Dan Snaith, better known as Caribou and curator of day three, brought the festivities to a close with electronic music’s answer to The Travelling Wilburys: the Caribou Vibration Ensemble. Flanked by Sun Ra’s Marshall Allen, backed by James Holden on modular synths and Four Tet on synths, with ‘im from Yeasayer on drums, their show at the Scala in London the previous Wednesday had been one of the best gigs I’ve ever had the pleasure of attending. Unfortunately, the entire Ensemble didn’t play twice as their early set lacked a few notable faces, and was, Snaith admitted, more of a ‘warm up’ for the spectacle later that evening.

Playing quite a few tracks from his back catalogue, particularly Andorra, the gentle nature of the set was a welcome tonic for the malaise that had settled over Butlins – affecting even the seagulls it seemed as their sandwich-stealing (right from my mouth) antics were notable by their absence. ‘Melody Day’ and ‘Jamelia’ were the two most noteworthy performances, nursing sore heads both on and off stage.

The importance of atmosphere and surroundings with regards to live music has never been more apparent when contrasting their performance at the Scala, in a small venue full of a well rested and eager crowd, and at 12:45am on the final night of a festival on Butlins’ main stage. Erring on the side of self-indulgent, the Ensemble was always going to be a divisive act, particularly at an event such as ATP where it seems that 'songs' are preferred to ten minute jams. Well, sod those 'song' lovers, they were brilliant, if not quite up to the standards they set four days previously. Particular highlights were, naturally, hits off of the ridiculously excellent Swim. ‘Odessa’, ‘Leave House’ and the track which has brought every Caribou gig to a close for the past two years ‘Sun’. The Ensemble are chaotic, noisy, they defy structural norms and at times seem like they are enjoying themselves more than a number of people in the crowd. However they have truly set the bar high on how electronic music can be translated live, and really bring into focus the question as to why more bands don’t have two drummers. The only disappointment that remains is that in all likeliness, this was the last time that the Ensemble will exist in this incarnation. (AB)

One of the most pressing questions in the days leading up to ATP was just how Connan 'Mockasin' Hosford was going to sound live. His voice surely can’t sound like that in real life…can it? Well, while not quite as much like a 'five-year-old Chinese girl warbling', as DiS’s Andrew Kennedy so kindly phrased it in his Forever Dolphin Love review, his squeaky falsetto nevertheless sounds inhuman. Playing mid-afternoon, the band managed to capture the sleepy psychedelic atmosphere of the album remarkably well, their dreamlike music washing over the crowd and making it feel as if you were standing under water. ‘It’s Choade My Dear’ and ‘Forever Dolphin Love’ were the particular highlights, transporting you to what seemed like an Ab Fab flashback, viewed through a sepia-tinged shimmer. (AB)

Sun Ra Arkestra… what can I say? Odd. Should not be allowed to perform at that stage of a festival weekend, as loud jazz combined with strange Egyptian costumes and that amount of glitter and gold (put Les Savy Fav to shame) created the most peculiar of feelings. (AB)

The longstanding collaboration between The Ex and Getatchew Mekurya is a very slightly confusing proposition. Backing the Ethiopian jazz tenor sax stalwart, the Dutch post punks enlist a further horn section for an incredibly colourful, righteous and riotous celebration and examination of life. Despite a very slightly lacklustre opening, come the end the explosive brass mix with the heartfelt declamations of Arnold de Boer to make this set one to remember. (CA)

Kieran 'Four Tet' Hebden has, so I’m told, been labelled by musical philistines as 'Snore-Tet', a description which is as unfair as it is stupid. I assume this title stems from his no-frills performance style, where he takes his time meticulously mixing tracks together (he spent 40 minutes at Sonar this year playing four songs). But where the attention span-challenged miss a trick is that while you may not be smacked with hit after hit after hit in short succession, you are treated to the intricacies of his music, and the delayed gratification is something to savour. And as for the lack of visuals or gesticulations, well, the lesson which needs to be learnt by many who attended ATP is that unless a producer is Deadmau5 or one of the Chemical Brothers, you really don’t need to stand motionless and face the stage. Playing quite a few hits off of his album There is Love in You, the pinnacle of his performance came with the monstrous ‘Love Cry’. (AB)