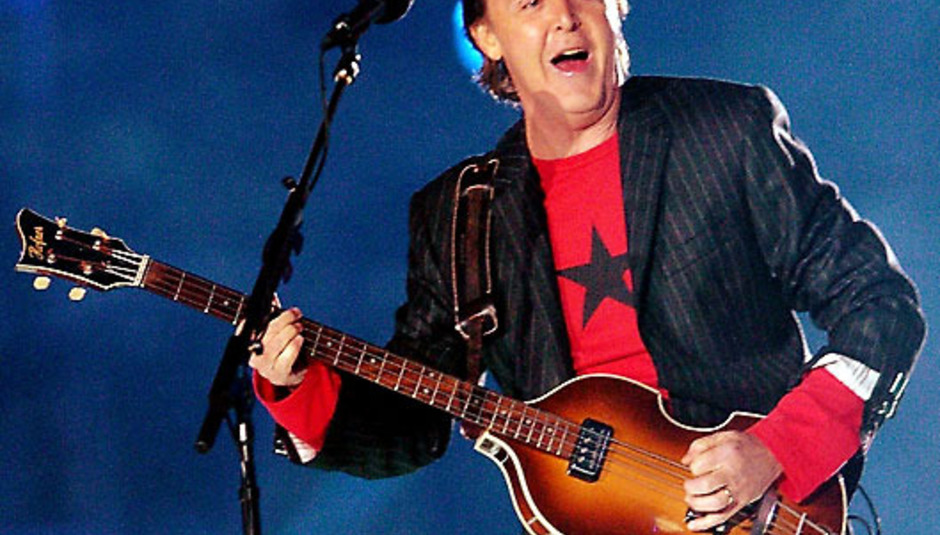 Towards the close of Paul McCartney’s initial set during his stupendous 39 song, three hour show at Manchester’s Evening News Arena, he stands leaning over his piano, one leg on the stool, hammering away at the keys like Jerry Lee Lewis. Pyrotechnics and flames tear across the stage as he and his band deliver a muscular and raucous ‘Live and Let Die’ that frankly, makes the Guns ‘n’ Roses cover appear positively meek by comparison. As the song concludes, he leaps from his piano, runs down the steps and skids to a breathless halt at the front of the stage. At this point, the thought suddenly enters my head: this man is nearly 70. This man is supposedly the “Tame Beatle”. This man is, to some people, an old, veggie-chomping hippie who is a little too fond of tweeness, acoustic ballads and whooping inappropriately.

While it would be insulting and a gross overstepping of common logic to say that McCartney’s continual touring and commitment to his live show is due to the oft-touted and profoundly lazy opinion of him somehow being the lesser-talented of The Beatles primary songwriting team, there is certainly something within his bones that continually prods him into action. In reality, he doesn’t need to do this. He’s done a million times his expected share in pushing music forward; he could be soaking up the retirement riches and spending time with his new wife. But instead, he’s out touring and more importantly, giving staggeringly good value for the hard-earned pennies. Like Dylan, there seems to be some invisible thread forever connecting him to the road. Unlike Dylan however, McCartney’s live show is fully able to justify the very reason for him lasting so long upon that road.

From the moment the fanfare of ‘Magical Mystery Tour’ echoes out across the sell-out crowd, there is no let up whatsoever. No fat, no filler – just non-stop hits. The songs are cut lean and raw: minimal jamming or instrumentals as he and the band catapult their way through Beatles, Wings and solo numbers at a dizzying pace. The likes of ‘All My Loving’, ‘Got To Get You Into My Life’ and ‘Paperback Writer’ are stonewall classics, still resonating with the immortal vibrations of 60s teen exaltation. ‘Let It Be’ is mercurial, ‘Back in the USSR’ is as thrillingly euphoric as ever and ‘Band on the Run’ remains one of his finest post-Beatles tracks, alongside a superbly delivered ‘Maybe I’m Amazed’. We get a few rarities too: ‘The Word’, ‘The Night Before’, ‘Mrs Vandebilt’, ‘I’ve Got a Feeling’, ‘Ram On’. But somehow, the most enduring and spellbinding moments of the night are those when Paul is alone onstage. A hauntingly beautiful version of ‘Here Today’, written in the aftermath of John Lennon’s 1980 murder is strikingly powerful in its simple sorrow. We get a note perfect version of ‘Blackbird’ and a delicate ‘And I Love Her’, alongside a quite majestic and heart-stopping ‘Yesterday’. And arguably the finest moment of all, a carefree anecdote about George Harrison that casually transforms into a gorgeous ukulele version of ‘Something’, before in a moment of jaw-dropping brilliance, the whole band suddenly and unexpectedly explode in to the middle section to leave grown men and women dumbstruck. It’s quite astonishing to witness.

Granted, there are a couple of duff moments scattered about here and there (‘Dance Tonight’ is throwaway, ‘Ob-La-Di, Ob-La-Da’ manages to somehow sound even more corny in the live setting and you should never, ever interrupt 'A Day in the Life' – one of the greatest songs ever committed to tape – for a singalong of ‘Give Peace A Chance’). But these are mere trifles compared to the spread on display; for the most part, this is something beyond spectacular. His band (containing guitarists Rusty Anderson and Brian Ray, long-time keyboardist Paul Wickens and man-mountain drummer Abe Laboriel Jr.) are magnificently drilled: a perfect balance of tight and loose with elastic compromise – the songs effortlessly and organically soar in their hands. His voice remains bizarrely untouched by the decades and countless gigs: he may cleverly work away from the high notes occasionally but the softness is still there, as is the throaty crunch when he chooses to dig into the throttle. And even his stage banter – so often a stick used to beat him – is sharp and playful tonight, at times even dryly sarcastic. And when he does do the corny stuff about love, the world and departed friends, you’ve got to remember this: for every person that cringes, there are ten that happily clutch their partners, whisper and smile. He’s not stupid, he plays to the percentages. And if you really and truly have a problem with that, it probably says more about you than it does about him.

A glorious ‘Hey Jude’ reminds everyone why it remains the template for how to write an anthemic pop song. People are actually in tears around me by this point. He even gets away with playing the god-awful ‘Wonderful Christmastime’ – partly because it’s the festive season and partly because he counterpoints it with a sweat-drenched and frenetic version of ‘Day Tripper’ that crackles with electricity; though not nearly as much as a visceral ‘Helter Skelter’ – still sounding fresh and challenging despite the span of its 43 years. The conclusion, when it finally comes after three hours, is magnificent. Sitting again at his piano, he begins to play the simple and haunting chords to ‘Golden Slumbers’ before leading it into ‘Carry That Weight’ and then ‘The End’ – replicating the flawless coda of The Beatles final recorded album. It’s a perfect ending: McCartney and his two other guitarists trading riffs before concluding with the simple closing adage that “And in the end / the love you take / is equal to the love you make”. And then, amidst a cannon of tickertape and thunderous applause, he finally leaves the stage after an astonishing performance - up there with the best things I’ve witnessed this year. Look, he may not, or this sort of live event may not be your particular thing…I understand that. And by all means, criticise his silly gestures, criticise his daft remarks, criticise his Dad Dancing. And go ahead - criticise the f**king Frog Chorus if you really want to make an irrelevant and tired remark that will impress the square root of nobody. But when it comes to his finest musical moments and live performances, never ever criticise what he has achieved over the years. I mean, why would you? Paul McCartney is not only a cornerstone of modern music, he’s also one of a scant few who still frame their greatest songs with the true decoration and honour they deserve upon the live stage. It's a near-perfect live performance and a spectacular lesson in popular music history. The idea that Paul McCartney is somehow required to galvanise his legacy is a curious and confusing one indeed, but if he does indeed feel the need to embellish it, he’s going about it in a quite remarkable way. Live shows simply don’t come much better than this.

ATP Nightmare Before Christmas: the D...