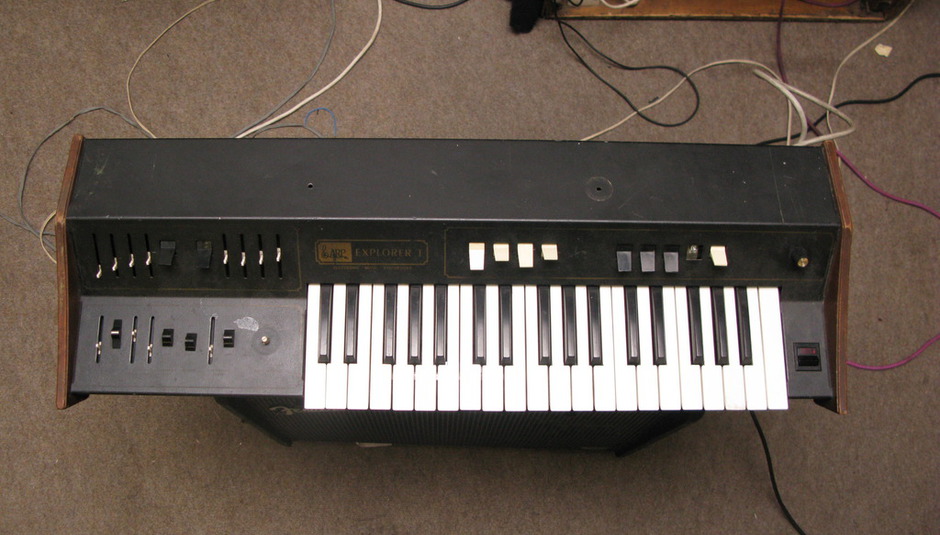 All week this week Apparat Organ Quartet kick off a new 'Planet Gear' irregular feature for DiS, in which we ask musicians to get a bit geeky and talk us through the equipment that makes the magic happen....

"My Arp Explorer is one of the first so called user-friendly synthesizers to enter Iceland. It was designed by Americans to be a portable, easy-to-use performance instrument. A friend of mine bought it in 1978 but by then it had been in use for a few years by the guy who brought it to Iceland. My first experience of the Arp was one year later. My band was playing a small concert in Reykjavik, backing up my friends band. I got permission from my friend to use his Arp Explorer. I put it on top of my organ and was very exited. I didn't know anything about how to use this kind of instrument but I got two minutes to experiment with it before it was my turn on stage.

This first performance with the Arp was a disaster in a way because, when I started to play, I completely lost control of the instrument and the beautiful melodies I had in my mind never came to the ears of the audience. The audience only got something that sounded like very unmusical feedback and shivering resonance. But I fell in love. I managed to persuade my friend to sell his Arp synthesizer to me. He did not like the idea because he had heard the performance but I can be very persuasive and also could offer him lot of money (by the standards of young Icelandic musicians in the late seventies). That was because I had been working hard for a few months on the high-power lines in the highlands of Iceland.

My Arp has always been dysfunctional. It is not just my clumsiness. Some knobs work this month and some haven't been working for many years. The instrument is definitely not in a mint condition and never has been! A guy who was helping me to fix the power supply a few years ago wanted me to throw the whole synthesizer away.

Some keys trigger strangely (or not at all) and often play odd notes on release. The sliders need to be drowned in contact cleaner to make them work. The oscillator has his own free will and the filters have a new function every time you turn the instrument on. The Wave-controllers are broken and only work now and then. The original pitch-shift knob was stolen (that's strange) and had to be replaced by a knob from an old calculator. The instrument is nearly always slightly out of tune, no matter how much effort you put in the tuning. Twice, my Arp has given me 220 Volts in a concert when I opened it to fix a stuck key and forgot to switch off the current...but I like the taste of electricity.

I've been using my Arp for over 30 years. It can be heard on quite a few records and I have played it in innumerable concerts in Iceland and all over Europe. Once I took it with me to the United States. That was the last time it went overseas, because there was a heatwave in New York and in Central Park it completely broke down.

It took a few months to find someone willing to help me in the reconstructing of it and it was expensive (by the standards of an Icelandic organ-player). Now I only use it in the Apparathouse (our studio) and once or twice a year in carefully selected events. I still don't know exactly what will happen the next time I turn it on - but that's the beauty of it. I love my imperfect Arp Explorer."