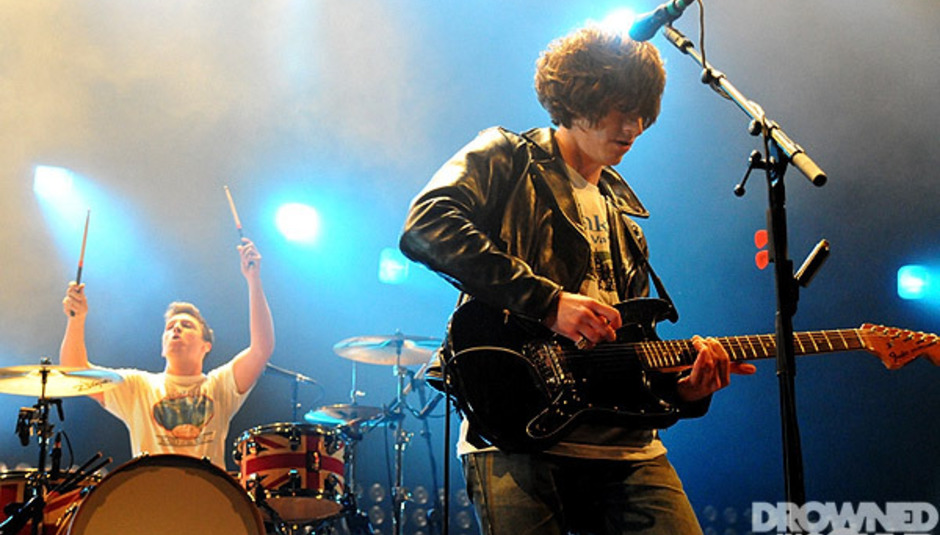 In these times where we're forever being told that festivals have supposedly had their day, let's not forget that there are still a handful of events that still sell out well in advance. In the case of the often berated, Virgin sponsored V - that's 180,000 tickets to be precise - and this well before the majority of the line-up was even announced.

Ah, the V Festival line-up. Often the chagrin of many a music snob's sneering disapproval, yet when all's said and done, is it really that different to the majority of Europe's similar sized festivals in terms of billing and demographic, Primavera Sound being the glaringly obvious exception? The correct answer would be "No, not really", except for the fact that unlike say Leeds and Reading or even (as much as we love it) Latitude, they've gone and pushed the boat out as far as genuine exclusive headliners are concerned.

Yes, that's right folks, sneer all you want but at no other UK event this summer will you see either the Arctic Monkeys or Eminem - not to mention a rare set from pop princess Rihanna - sitting proudly atop a bill that, while not being DiS friendly to the point of garnering bedroom constructed techno on Apple Macs, isn't all bad either if you tread carefully.

Sure, amidst the daytime Radio One fare and generic lad rock there's more than enough on offer to keep even the most discerning music fan content for its two-day duration. Last year's highlights included Eels, Mark Lanegan and the wonderful Frightened Rabbit who even wrote DiS their own V Festival diary. This weekend (August 20th & 21st), the 2011 edition of V opens its doors and also features a number of artists we're getting excited about seeing across its dual sites of Weston Park in Staffordshire and Hylands Park, Chelmsford. Here's 10 we recommend you check out...

(Virgin Media Stage - Chelmsford Saturday, Stafford Sunday)
While expectations were maybe a little too high for recent fourth album Suck It And See after 2009's excellent Humbug, there's no disputing the Arctic Monkeys continued reputation as an incredible live band of considerable prowess. Their homecoming shows at Sheffield's Don Valley in June were heralded as something of a triumph, not to mention noteworthy for one or two surprise inclusions in the set from "back in the day". Whether 'Mardy Bum' or 'A Certain Romance' will make an appearance at either Chelmsford or Stafford is anyone's guess, but you can be sure of an hour and a half's worth of full-on, no holds barred rock and roll.

(Virgin Media Stage - Stafford Saturday, Chelmsford Sunday)
Since bursting onto the scene at the tail end of the 1990s, Eminem has enjoyed something of a rollercoaster ride both critically and commercially. Undoubtedly at his creative peak around the time of 2000's third album The Marshall Mathers LP, complacent self-indulgences such as disappointing follow-up The Eminem Show and its even less impressive successor Encore saw him labelled as a parody of his former self by many critics. Nevertheless, last year's Recovery was something of a return to form, and his only confirmed shows on English soil this year should be eventful if nothing else.

(Virgin Media Stage - Stafford Saturday, Chelmsford Sunday)
"Oh Na Na, What's My Name...?" Sure, it's not big and it isn't particularly clever but then the best pop music was never meant to be. And make no mistake about it, Robyn Rihanna Fenty can lay claim to having recorded some of the best pop music on the planet since 'Pon De Replay' appeared from nowhere almost six years ago to the day. Again, making a rare appearance and her first at a UK festival of this nature, whisper it quietly but this could well turn out to be one of the musical highlights of the summer.

(Virgin Media Stage - Stafford Saturday, Chelmsford Sunday)
It wasn't that long ago that the Manic Street Preachers were headlining V alongside Suede (1999, my first V!), and despite being relegated to a supporting role this year, recent performances on last year's Postcards From A Young Man tour only served to highlight the fire still hasn't disappeared from their bellies. While we can only hope and pray for a subversive set of material compiled from Generation Terrorists and The Holy Bible to piss those lairy Courteeners and NDubz fans off, rousing renditions of songs about the Spanish Civil War and American war photographers seem more likely. Not that we're grumbling either way...

(The Arena Stage - Chelmsford Saturday, Stafford Sunday)
2011 has been an astounding year for London's Katy B. Not only was her album On A Mission released to universal critical acclaim, but then she found herself as an unlikely (and most deserving) nominee for this year's prestigious Mercury Music Prize. Initially lauded on the Magnetic Man produced single 'Perfect Stranger', she's since come into her own right as both a recording artist and live performer as anyone that witnessed her outstanding sets at Great Escape, Glastonbury and The Big Chill can testify.

(Undercover Stage - Stafford Saturday, Chelmsford Sunday)
The brainchild of one Matt McElligott, Wolf Gang sounds like it could have been created at any point between 1974 and the present. Some call it electronic chamber pop, others flamboyant and intelligent disco. We're not really sure where Wolf Gang sits in the grand scheme of things but what we do know is that 'The King And All Of His Men' and 'Dancing With The Devil' are both TUNES of the highest order that make us visualise such hedonists as The Mael Brothers and Talking Heads at the height of their pomp.

(Undercover Stage - Chelmsford Saturday, Stafford Sunday)
LA's Airborne Toxic Event may have made Pitchfork spit their dummies out, yet to these ears, they sound like a radio-friendlier amalgam of mine and your favourite bands with a live show to die for. In what is surprisingly their only UK festival booking of the summer, expect to hear underground outsider anthems aplenty with maybe the odd cover version from The Boss and Q Lazarus thrown in for good measure.

(The Arena Stage - Stafford Saturday, Chelmsford Sunday)
Having emerged in the early 1980s after Mick Jones left The Clash, Big Audio Dynamite enjoyed moderate success with early singles 'E=MC2' and 'Medicine Show' before becoming a more experimental outfit. Often misunderstood, and in many ways perhaps years ahead of their time, the likes of 1986's No.10 Upping St. undoubtedly paved the way for crossover bands like The Rapture and Radio 4 a decade or so later more than Jones' previous outfit. Having re-united the original line-up of Jones, Don Letts, Dan Donovan, Leo Williams and Greg Roberts earlier this year, expect a forward-thinking set rather than one wallowing in nostalgia.

(4 Music Stage - Stafford Saturday, Chelmsford Sunday)
Love them or hate them, there's little doubt that with 1991's Screamadelica, Primal Scream created one of the most definitive albums of theirs or any other generation. While it would be fair to say their output has been inconsistent since then, at their best they've released some astonishing records and can lay claim to being one of only a few bands capable of transforming a mere gig into an event demanding legendary status. Here, they'll be resurrecting Screamadelica in its entirety, and for that reason alone should not be missed.

(Virgin Media Stage - Chelmsford Saturday, Stafford Sunday)
If Marmite were to ever launch a variety of their universally popular (despite its slogan) brand based on a musical theme, the Kaiser Chiefs would surely appear on the label. Very rarely has a band gone from hero to zero and back again in the eyes of both music connoisseurs and consumers over such a short space of time. After a three-year hiatus and a change of labels, recent long player The Future Is Medieval redefined the way albums could be released and consumed in the future, comprising twenty tracks and asking potential customers to select their favourite ten and essentially create their own album. A brave move if nothing else. Now if only they'll let us do that with their setlist too...