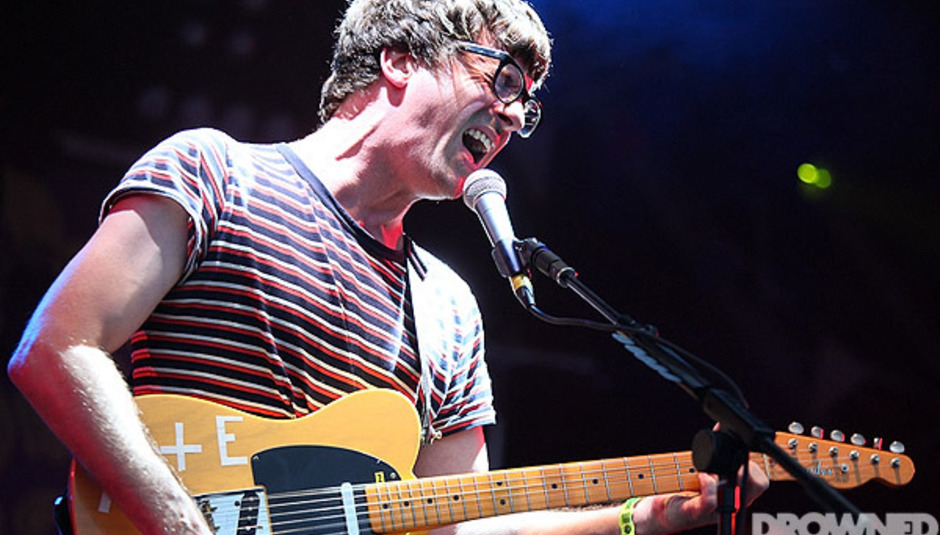 After a week that's seen widespread panic on the streets of London and beyond, thanks to the despicable actions of a thoughtless few thousands, it's good to know that some things never change. The Summer Sundae Weekender in the grounds of Leicester's De Montfort Hall is traditionally one of the most family friendly gatherings of its kind, drawing in punters of all ages from various demographic sectors in the process. Although partially funded by the City Council, the influence of booking agents Coda has come to the forefront more in recent years, while the festival's music policy has to be one of the most eclectic of its kind anywhere you'd care to mention.

Having said that, reports that ticket sales were much slower than last year, coupled with a bill that while eye-catching in places, didn't contain as many must-see names compared with previous Summer Sundae line-ups meant genuine concerns as to just how many people would turn up seemed to dominate Friday afternoon's chatter in the Orange Tree bar tent.

Ah, the Orange Tree bar tent! Yes, after an absence of two years, the bar with possibly the finest selection of real ales, cocktails and ciders anywhere on the UK festival circuit made a welcome return. Still, with the rain clouds hovering above and intermittent showers threatening to spoil the early part of the afternoon, it made sense that our first stop would take us to the Last FM stage for Other Lives folk-driven alt-rock. Unfortunately, after a nervy opening which saw them take half the set to tell those present who they actually were, things never really progress beyond second gear. Much better are Nottingham five-piece Fists and London foursome 2:54, the former's quirky lo-fi causing old men in ill-fitting Wonder Stuff t-shirts to regale tales of seeing The Cardiacs back in 1986 to anyone in close proximity, while the latter could be Siouxsie & The Banshees if one shuts their eyes and drifts off to a Robert Smith-themed parallel universe.

Biggest disappointment of the day - if not the entire weekend - has to be Wolf People, who may sound like intrepid krautrock enthusiasts on record, but here come across as little more than a regimented, less spectacular Kings Of Leon. In search of something that qualifies as entertainment, we stumble across The Bees on the main stage and despite claims of them being well past their sell-by date, find them infinitely more appealing. Graham Coxon also delivers a punchy, no holds barred set full of both old and new material. 'Spectacular' and 'Standing On My Own Again' rock in a polite but effective manner, and when I whisper to my Derby County supporting friend that la Coxon is of a similar ilk, he goes charging off to the front just in time for 'Freakin' Out' and the now obligatory cover of 'That's When I Reach For My Revolver'. Of the unreleased material, one song 'Running For Your Life' has a kind of Only Ones feel about it, while another introduced as simply being "about dancing" could have sat quite comfortably on a certain four-piece's more experimental offerings in another pre-millennial lifetime.

Stopping by for a brief glance at Shonen Knife's shambolic playgroup punk, we leave immediately when they play a rendition of 'Blitzkrieg Bop', a song that could be described as being haphazard at best. As the weekend's headline acts go, The Maccabees Friday evening slot is by far the pick of the bunch (Newton Faulkner and/or McFly anybody?), which judging by the number of new songs they play - we count seven, although without the visual aid of a setlist (and no, we won't be flicking to setlist.fm either because that's like, cheating) we may be wrong - there's an element of tonight's performance having an air of a rehearsal about it.

Of the ones that do stand out, opener 'Child', originally aired at Leeds and Reading last summer rolls along melodically through the verses before changing tempo during its final third, while one which is introduced as 'Follow' could be the first Maccabees song to feature samples, which punctuate its darkly orchestrated structure. The more familiar strains of 'Lego' and 'Can You Give It' spark a halo of silly dancing and beer throwing from the young crowd gathered near the front, while even a cover of Aled Jones' 'Walking In The Air' pops up unexpectedly. The expansive 'Forever I've Known' and heavy pop of 'Grew Up At Midnight' bring up the rear in what was a confusing set to finish the first day. Hopefully things will become clearer when the Brighton outfit's third album drops this Autumn.

With a train to catch, we depart to see an army of police at Leicester station. Bring on day two...Unfortunately, an emergency appointment at the vets means we miss our intended 11:02 direct service from Nottingham, and with it Hhymn's set. When we finally arrive on site, we soon discover Flashguns to be a bewildering entity too. While devotees of the band may correct me if I'm wrong, we're pretty sure they were largely indebted to Foals and their ilk last time we saw them? Whatever, they've turned into stadium rock fetishists with delusions of U2 sized grandeur, although 'Come And See The Lights' and 'St George' both manage to rock our world, briefly. P.S. - will someone PLEASE turn that bass amp down? Thanks.

One band that has been catching our attention in recent months are The Heartbreaks, and as with their excellent show at Latitude last month, they're a minor revelation here as well. The likes of 'Winter Gardens', 'Delay Delay', 'Liar My Dear' and 'Remorseful' probably don't mean much to anyone at this moment in time but if they continue to write songs this good in the future they'll be around as long as the people that inspired them in the first place. From the sublime to the ridiculous then as Showaddywaddy's earlier trawl through Eddie Cochran's back catalogue attracts a sizeable crowd on the main stage. Dionne Bromfield also manages to attract a fair few to the Last FM tent, many no doubt in a voyeuristic capacity since the tragic passing of her Godmother Amy Winehouse. Backed by what can only be described as four over-enthusiastic dancers, her set reminds us of the old Channel 4 show Mini Pops in parts, yet vocally she turns in a quite flawless performance that even has the indie sceptics (i.e. - me) nodding in approval.

Sadly, less than a third of those packed in like sardines for her performance stick around for Yaaks, which is their loss as the brass-infused math-rock dance hybrid they offer has more in common with 80s bands like The Redskins or Shriekback than any of the more obvious 21st century contemporaries I'm sure many would lazily mention. Unfortunately, there isn't really that much else worth sticking around for on the musical front and DiS calls it a day early, safe in the knowledge that tomorrow is going to be pretty full on courtesy of...well, the DiS stage really. Batteries fully re-charged, the acoustic wares of Martha Bean ease us into Sunday mode before the full force of local four-piece Silent Devices brings a widescreen vision of epic to the party. Although post-rock in structure and time signatures, there's a depth to the melodies they purvey that brings to mind people like The Bolshoi or The Chameleons had they been born twenty years later, both 'Warm Blood' and the closing 'Moire' in particular sending shivering tingles up our collective spines.

The Antlers meanwhile are simply phenomenal, as if you didn't know that already. Having seen them nervously overcome technical problems at Great Escape three months ago, there's a buoyant, more confident outfit standing in front of us this afternoon. Peter Silberman's soulful vocal on 'I Don't Want Love' could be mistaken for both Prince and Jimi Somerville depending who you speak to, while on the gorgeous 'Parentheses' and triumphant 'Hounds' coupled with guitar player Tim Mislock's incendiary bursts of reverb there's even an element of early Verve thrown in for good measure. With all the plaudits laid quite rightly at the feet of current long player Burst Apart, from which the majority of today's set is taken, the only minor criticism would be a lack of Hospice material (in particular the anthemic 'Two'), but hey, that would be splitting hairs, and when something as achingly beautiful on record sounds so pitch perfect in the flesh, who are we to even attempt picking fault?

While The Phantom Band, The Leisure Society and Young Knives all make various claims to reach the dizzy heights of the Brooklyn combo, Glaswegian frontman Rick Anthony in particular cutting a menacing figure with the former, it's left to the intense drone-infused dance beats of London's Factory Floor to steal the show and own Summer Sunday - literally. While their stage set-up may resemble the sort of attire you'd expect to see in a Currys shop window display, their performance is even more unconventional in that Factory Floor don't work from a setlist as such. Instead, each piece, or segment as it shall be known from here on in, builds organically from the most simplistic techno beat into a mammoth wall of noise. We pay particular attention to drummer Gabriel Gurnsey, whose flailing limbs deliver a non-stop barrage of crushing blows to his brow-beaten kit for forty-five minutes flat. By the end, people are standing gawping into space transfixed at what they've just witnessed. This goes on for several minutes until conversation in the bar next door turns to "Did you see THAT?". Yes folks, that good.

Next up are Warpaint, and while we don't envy anyone having to follow Factory Floor, the LA four-piece make a pretty good job of it. Appearing more confident as a live outfit than a year ago, their seemingly constant existence on the road has stood them in good stead. The playful duels engaged by bass player Jenny Lee Lindberg with guitar slinging colleagues Emily Kokal and Theresa Wayman is both engaging and cute, but ultimately its the songs they'll be judged on, and despite the lukewarm response to The Fool last year, the majority of the set, lifted from said record, makes infinitely more sense in a live setting such as this.

As Example's chavvy techno-rap blathers in off the main stage and Everything Everything's too-cool-for-school indie blurs out the indoor speakers alongside us, DiS feels like it's trapped in the middle of an inescapable shit sandwich. Solace is sought in the Comedy Tent where John Cooper Clarke's dissonant rants prove anything but funny, before the lure of Leicester's finest Indian cuisine and a chicken tikka phaal saves the day. Overall, Summer Sundae has once again demonstrated why it sits among the upper echelons of chilled out, family friendly festivals alongside the likes of Latitude, Indietracks and Hop Farm. However, the musical policy - disparate and diverse as it is - maybe needs a slight rethink for next year (obvious exceptions noted) if its to continue attracting a steadier stream of punters through its doors.