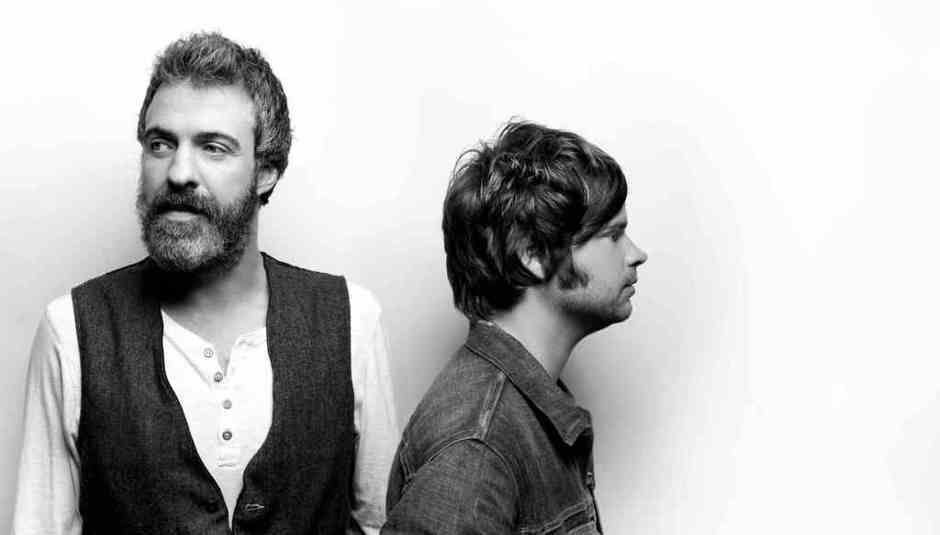 So many releases make this a log-jam week - so in an uncharacteristic display of 'not wanting to be unfair to music' I have included links to ALL the videos.

I am fond of any single capable of nifty changes in time signature; singles that wrong-foot as wonderfully as this are hard to come by. Combine this with a woozy brass section shirley lead by Billy Shears and you have a capricious, staccato triumph - a pop song whose every joyful element is daubed in house-high caps. Except that it is not daubed, because ‘Never Come Back’ is as precise in its purpose as a calligraphed will. Hyde and Beast (him out of Futureheads; him out of Golden Virgins) will not thank me for saying that they have provoked my most favourite of irrational responses; a song about which I want to say ‘If you do not like this, I do not like you.’ This doesn't happen very often, nor should it.

‘Maniac’ sees Clap Your Hands Say Yeah sound urgent as Devo. And Lore, does it ever suit them - with its drums the rest of the song spend all its three minutes trying to catch up with, and its air of triumphant romantic movings-on (I am sure there is a line about how CYHSY ‘don’t want to touch your dark parts anymore’). By far the giddiest release in this week’s pile, it has the sort of unignorable air that sugar-starved, sleeve-tugging toddlers would swap their best Go-Go for. Really, really wonderful.

As a collector of dictionaries on olden-day parlance and a confirmed phonetics fetishist, I was heartened to alight upon the word ‘bobwobwobwobwob’ a few weeks ago. Naturally I found it under a YouTubular for a dubstep jam, and naturally it refers to the noise that (like it or not) will come to epitomize the genre, for anyone whose only brush with it is Britney’s Hold It Against Me [‘Has Britney Killed Dubstep?' asked the internet, fearfully]. ANYWAY, I mention this if only to segue not-so-gracefully into a small dissection of Daedelus’ ‘Overwhelmed’, which doesn’t shy away from pushing the bobwobwobwobwob button, but somehow gets away with it. This proves that there is life in the old Bob yet [do forgive], and that if you combine morphing bass with with layer upon layer of clattering snares, dramarama keyboards and a punch-drunk vocal from Bilal, everything is Just. Fine. ‘Overwhelmed’ is a brilliant mess (my favourite kind).

The Rapture would like to restore our faith in pop singles with their urgent, desperate vocal performance, gladdeningly infinite piano stabs, doom synths and hand claps - so let us all welcome them with all of our person. ‘Let me hear that song’ they sing, coming perilously close to being a radio-play-baiting Song About Songs; which, like Disco About Disco, is a dangerous game. The Rapture have the temerity to call a song ‘How Deep Is Your Love?’, include a sax solo, and write a congratulatory middle eight comprised of the word ‘Hallelujah’ sung as a refrain. None of which are enough to stop it from being anything less than amazing. I mean, I would make a cheap point here about how In Times Like These, Such Songs Are Needed - but it would be about as pointless as trying to follow a troubling news story; or gauge the mood of the world, through Twitter hashtags.

You will buy this for the ‘Erol Alkan Extended Re-work’ because it takes something entirely marvellous and stretches it to the farthest reaches of the dancefloor, allowing you to wallow in its glossy perfection for nearly ten whole minutes.

Given my kooky-wooky stylings and the fact that, as a real-live woman, I cannot let a day go by without feeling the need to vocalise my need to split a choclit bar with my closest, shoe-mentile girl-pals; I am annoyed with Found for not sending me a real copy of their all-too-real single. Which is released as an edible, chocolate seven. As may be obvious, ‘Anti-Climb Paint’ uses the image of non-stick emulsion to communicate how Found know a lady who will not let them crawl up her legs. Women! Always with your contradictions.

On which my beloved Joe calls upon a choir of angels to introduce a tune that begins all rowdy repetition, and then drifts into the sort of house jam it would be criminal to damn as ‘uplifting’. This is in part due to some vocals as pure as the remotest mountain-spring; though we might also blame the delicious mood of propulsive threat provided by a drum section that appears to trip over itself, in a rush to move forward. He knows what he’s doing, alright.

A shuffling waltz, ‘History Of Love’ is one of those songs that ebbs and flows, wavering to a Christmassy climax every minute or so. Like all the best love songs, it is also a merry-go-round. And though the gold leaf on your horse’s bridle appears chipped, though at first all this upping and downing on spiral poles seems absurd, eventually you come round to its hopeful circuity; anyone who imagines they will never fall in love again most slowly, surely will. Sharing the hopeful yet cautionary air of Julee Cruise’ ‘Falling’, though on first listen its broadest touchstones are obvious; breathy, imperfect vocals, swirlingly dischordant guitar lines – in the end it would be wrong to measure ‘History Of Love’ as merely a sum of its parts. Only a few bands are capable of capturing this sort of rich autumnal delirium - to the point that Still Corners almost (almost) earn the grandeur of their song title.

The point at which bands tip into self-parody is hard to pin down, and often it is the flimsiest of disparate things conspiring. Sometimes it is just that you have listened too hard to a band, leaving you with the itchy feeling that all your expectations are about to be met on every new listen; you have their number. Sometimes, it is because someone has been doing Guy Garvey: Ruddy Good Bloke impressions because they know it amuses you. Whatever it is, ‘Lippy Kids’ is a beautiful, elegant single that contains absolutely no surprises and which - though solid as a fortress - fails to move me as it should. As ever, this is emphatically my problem.

Not entirely without charm, Niteflights wrote me a nice email in which they promised to love me ‘with all the madness in their soul’ if I wrote about their song. Never one to miss an opportunity to claim affection by devious means, they are - like many these days - following a path paved by Jonathan Richman; especially were he to have engaged more fully with rinky-dink synthesizers. I am torn between finding them sweet and darling, and wishing they would stop being so fearfully jolly. ‘Marnie’ is not too shabby lyrically though, even though by their second email Niteflights had already started making not-so-oblique allusions to their ‘nine-yard’ wangs.

“However he has also got his own manner. A brusque northern no bullshit, hands in pockets, staring into the void stance.”

“Don’t let them fool you. Britain is not all fancy wine bars and radio 2 jazz pop. There are still some bands band out here who walk it like they talk it.”

“This is the Suzukis, the best post-Oasis band to arrive on the scene in years.”


Wendy is on Twitter, here. She reads the press releases so you don’t have to, but occasionally they are SO inhuman, and so shockingly DREAD, they must be shared.