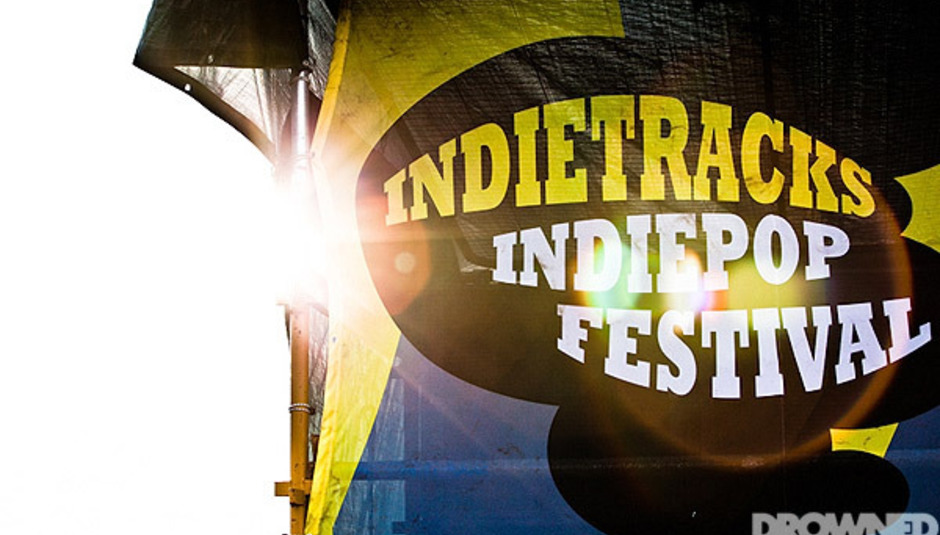 As the exact polar opposite of corporate events such as Reading, Leeds or V, Indietracks has gradually earned its place as one of the highlights of the summer festival season for the discerning lover of all things truly independent and underground. From its idyllic location in the tranquil Derbyshire countryside site of Butterley's Midland Railway, to the "other" activities on offer which include a Cupcake decorating party, Sunday morning yoga classes with Frances McKee of The Vaselines and a teatime knitting workshop entitled Knit Cave And The Bad Tweed (we're not making any of this up), there's a unique vibe that stretches far beyond any of the musical treats on offer, even down to the exceptionally cheap merchandise. Indeed, among the many purchases DiS makes this weekend are a 21-track compilation CD called The Sound Of Leamington Spa for one measly pound and an anthology of sorts from ace-but-long-forgotten Bristolian quartet The Groove Farm for a few quid more. It would also be churlish not to mention the delicacies on offer such as Gopal's Curry Shack or the excellent choice of real ales (Call It A Day goes down a treat) and homebrew strength cider - the 6.9% Cheddar Valley proving the cause of Saturday night's head wreckage. Even at £4 a pint, it still beats the standard festival fare of warm Carlsberg or Strongbow any day of the week...

Nevertheless, Indietracks being a music event first and foremost, DiS holds its hands up in dismay at missing Friday night's festivities due to transportation issues (we won't go there - and didn't as it happens...) doubly determined to make up for lost time over the course of the weekend by catching as many bands as possible. 2011's line-up somehow manages to boast even more unknown quantities than in previous years, so without further ado, Saturday lunchtime can't come around soon enough... Having spent the first part of the morning frantically finding a vet capable of dealing with a toothless rabbit that's stopped eating, the cheerful barman on the steam train into the site informs us that A) the weather forecast says there'll be no rain in Derbyshire all weekend; and B) ticket sales are allegedly down 60% on last year. While having no reason to disbelieve him as far as the latter's concerned, the glorious sunshine seems to have brought out sunbathing punters in their droves.

Upon arrival, we're greeted by a cover of The Pretenders 'I Go To Sleep' by indie supergroup-of-sorts The Fireworks, which stays true to the original for the most part if a little heavier on the reverb in places. This won't be the last time alternative versions of modern day classics take centre stage this weekend. However, swiftly moving on, Leeds four-piece Just Handshakes (We're British) make us yearn for the hazy days when Bis gatecrashed Top Of The Pops, plus, one song even manages to sound like 'Youth Against Fascism'. Or the bassline does at any rate. Better still are the excellent Tiny Fireflies, a duo better known for being two-fifths of Chicago's Very Truly Yours (who'll grace the main outdoor stage tomorrow), yet whose quaintly delivered tweetronica mixes Kate Bush style histrionics with Joy Division rhythmic stutters and the elegant sadness of Sound Of Water era Saint Etienne. It's by far the highlight of our afternoon so far, and one of the many reasons why Indietracks is such a quirky voyage of discovery.

Shouty Spanish pop ensemble Guatafan and Swedish outfit The Garlands provide the uptempo accompaniment to our 4th and 5th pints of the lethal Cheddar Valley beverage respectively, while Greek foursome Next Time Passions mix Wedding Present-style anachronism with wispish vocals straight from The Orchids songbook. The always excellent Butcher Boy meanwhile are a revelation on the main stage, John Blain Hunt and associates playing a career-spanning set of highlights including 'I Know Who You Could Be', dedicated to their friend "Katie" whose birthday it is today (if Beyonce can do it, why can't they?) and 'Carve A Pattern' from sophomore record React Or Die. It's the newer material though that really stands out, the melancholy strains of 'Imperial' and title track 'Helping Hands' in particular readying all and sundry for the imminent arrival later this month of possibly their finest collection yet. Sadly, time constraints force their set to be cut short by two songs, but for thirty-five minutes or so they're onstage the bar is raised.

The Pains Of Being Pure At Heart endorsed History Of Apple Pie may be based in that there London, but their sound is reminiscent of Seattle circa 1987 in a similar way to that of fellow slackers Yuck. They're an animated bunch mind, and 'You're So Cool' and 'Science For The Young' make us yearn for trucker caps and long sleeved sweatshirts, even in the blinding sun, so we'll let them off. Help Stamp Out Loneliness are a different proposition altogether. Led by charismatic frontwoman Dianne Campbell, whose distinctive baritone and icy stare could shatter glass across a crowded field (and very nearly does). Their music could be described as quasi-operatic post punk with a slightly krautrock exterior. Several songs have that rigorous surf vibe reminiscent of Martha & The Muffins 'Echo Beach', and even a mid-set generator failure that cuts the power on the main stage (more of which later...) can't halt proceedings. Unfortunately, it does put paid to the rest of the evening's entertainment and the remaining two acts, The Hidden Cameras and Edwyn Collins, are forced indoors to the Shed, despite the former's gallant attempts at performing an impromptu acoustic set. Inside, Collins' brave performance induces both tears of laughter and joy. While his recent difficult early afternoon slot at Latitude suggested perhaps the organisers at Indietracks were being a bit presumptuous booking him as a headliner, he battled on resoundingly in more intimate surroundings here. Solo material such as 'Losing Sleep' intertwined with more familiar pieces from his Orange Juice past, 'Dying Day' and 'Falling And Laughing' in particular raising the biggest cheer, actually achieved what no one stood aghast at Collins' struggling demeanour in Henham Park two weeks earlier could have expected. A triumphant, if at times poignant, comeback.

Visibly disheartened by the chaos and upheaval caused by the main stage sound issues, The Hidden Cameras seemed to be going through the motions at times, although 'Death Of A Tune' is...well, a tune. They don't play 'Ban Marriage' - they never do when I go see them - and we promptly head off to the Big Pink Cake disco where 'Emma's House' by The Field Mice and 'Shimmer' by The Flatmates are playing back-to-back, which is about as surreal as it's ever likely to get on a Saturday night in the Derbyshire town of Ripley.

Batteries fully recharged and hangover just about cured, Sunday's voyage of discovery takes us into the church for the first time this weekend, where man-of-many-bands Frankie Machine is playing a delightfully quaint set of mainly acoustic ditties. Over by the merchandise stall, London four-piece The Understudies prove to be one of the highlights of the day, and undoubtedly the pick of the bands we see playing before the assorted rows of t-shirts, vinyl and CDs this afternoon (sadly we end up missing White Town, who I'm later informed was "phenomenal" by those that did catch Jyoti Mishra's acoustic set). Obviously schooled on all things Morrissey, Marr, McLennon and Forster, their sophisticated indie pop is a blessing and fully deserving of the large queue that forms to buy current single 'Everyone Deserves At Least One Summer Of Love' at the end.

Moustache Of Insanity too play an unannounced mini-show in the marquee, no doubt as a warm up for the Knit Cave And The Bad Tweed workshop about to take place in a few minutes. It's heartwarming and leaves radiant smiles aplenty, as do A Fine Day For Sailing's overtly twee ode to Indietracks, hurriedly constructed by frontman Matthew Stead, whose vocal falls somewhere between the sartorial charm of Buzzcock Pete Shelley and Gregory Webster of The Razorcuts. Spanish duo Papa Topo, translated as "Pope Mole", fuse the tweepunk sensibilities of Dweeb and Bis (that's two reference points in one weekend...) with the slightly less amorous musings of The Bluebells. Possibly the most diverse act on the entire bill has to be Haiku Salut, a three-piece borne out of shambolic indiepoppers The Deirdres. Forging experimental waves of instrumental folk cut with looped post-rock stylings and members of A Little Orchestra wandering on and off stage whilst joining in at random intervals, they're a curious oddity and undoubtedly the least predictable band DiS has witnessed in many a month.

Sadly the quality control is let down slightly by the obvious Smithsisms of Japanese foursome Sloppy Joe and Sheffield's The Sweet Nothings, both of whose sets are only memorable for the "ironic" cover versions contained within, Abba and Aztec Camera being some of the unfortunate victims we pick out. At this point we leave the site for an hour of reality and pub grub, encountering a distraught Sheffield Wednesday supporter crying into his beer having just watched his team crushed 14-0 by the mighty Alfreton Town that same afternoon.

Back onsite, having missed the majority of Jeffrey Lewis' tales of misfortune and woe in the process, it's left to Crystal Stilts to restore a semblance of quality to what has largely been a musically lack lustre day. That they stand out head and shoulders above pretty much everyone else here the entire weekend is no real surprise to anyone that's seen them before. Their set, largely culled from this year's In Love With Oblivion, is a flawless exercise in dark, melodic psychedelia-tinged pop. 'Sycamore Tree', 'Through The Floor', 'Half A Moon' and a euphoric 'Prometheus At Large' resonate emphatically, while former single 'Love Is A Wave' and its b-side 'Sugar Baby' have us dancing incessantly like it's Saturday night. Which it isn't. Shoot me down in flames if you have to, but I've never really gotten to grips with Herman Dune. Sure, their countrified folk is "nice" and "likeable" and any other indiscriminate adjective you'd like to add that simply says "OK" but pardon me for being the party pooper but a headline band to close a weekend festival they most definitely are not. 'Tell Me Something I Don't Know' off their most recent long player and 'Show Me The Roof' have a well orchestrated and quaint feel about them, but after seeing the likes of Teenage Fanclub, Los Campesinos! and The Pains Of Being Pure At Heart bring the curtain down in style on the Indietracks weekend in recent years, their set feels like something of an anti-climax.

Saying that, this is still possibly the friendliest, most polite and laidback festival we've ever encountered, and having celebrated its fifth birthday this weekend, let's hope Indietracks stays around for many more.