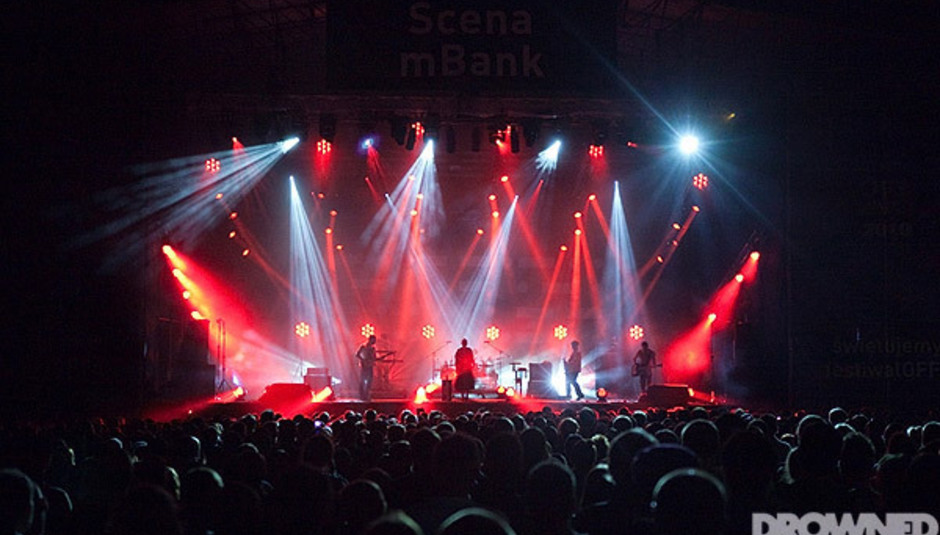 At DiS, we're big fans of Poland's OFF Festival. Partly because it's so impressively affordable for a festival of its size and line-up. Party because it's held next to an airfield near Katowice, where performances on the main stage are occasionally punctuated by the roar of an aeroplane passing by close overhead. But mostly because it gathers together unusually adventurous, genre-spanning line-ups, the likes of which are tough to find in the UK, where most larger festivals stick dogmatically to a certain category of music. So at OFF you're likely to find rock bands you'd usually associate with ATP (this year, Oneida, Low, Deerhoof, Polvo), the sort of dancefloor fodder you might encounter at BLOC (Loefah, Kode9, Boddika), and all manner of strange and beautiful hybrids (Hype Williams, Oneohtrix Point Never, Actress, How To Dress Well).

The scheduling is beautifully executed, too; last year, the timings for William Basinski's haunted tape soundscapes and Philip Jeck's abstract turntablism defied the usual logic of high energy for late at night. Both on at 2am, their near-ambient sets turned what could have been club floors into relaxed, contemplative spaces, where close listeners mingled with half-asleep punters curled up on the ground.

This year, add the likes of Primal Scream, PiL and Sebadoh, a host of largely unknown and often excellent Polish bands, and booze that costs pennies, and you've got a recipe for a wonderfully diverse weekend.

OFF 2011 is happening this weekend (4th-7th August) in Katowice, Poland. It’s been tough to select from such a uniformly high quality line-up, but here are twelve artists DiS will be running to catch.

After a stellar 2010, which saw his second album Splazsh gather critical adulation from every corner of the press (with good reason: it was one of DiS’ favourite underground records of last year), Darren Cunningham’s music as Actress is steadily growing in stature. Essentially techno, at least in structure, Cunningham blurs into its metallic four-to-the-floor pulse influences from eighties pop, ambient, dubstep and music concrete; the result is disorienting and emotionally affecting in equal measure. His recent ‘Harrier ATTK’ single on Nonplus was a particularly hard-hitting example of his approach, an abrasive, wracked take on electro that’s primed for both head and club. His live performances are of a similar ilk, blurring together his tracks into a supremely danceable whole.

One of those cult musicians who never quite attracted the success he deserved, last year’s stunning Before Today finally saw Ariel Pink starting to make waves on a wider scale, its lead single ‘Round & Round’ as perfect a blend of AM radio soft rock, tape hiss and sunshine pop haze as anything released in the last decade. While he’s been exploring similar worlds – the point where pop music starts to dissolve around the edges into fucked lo-fi – for years, inspiring an entire genre (chillwave) in the process, the album marked the point at which his songs were able to peek through the murky production that shrouded them. Performing live with his Haunted Graffiti band, expect pop with a side order of theatrical chaos.

London/Berlin duo Hype Williams are one of a crop of excellent new groups that bear the influence of Ariel Pink, though given their notoriously combative stance, they’d doubtlessly deny the connection wholescale – their recent ‘last interview ever’ with myself at The Quietus gives some indication of their approach to the press. Their melancholy synth soundscapes are cut through by fuzzy edged samples, ripped at low bitrate from YouTube and self-help videos, and vicious in their appropriation/savaging of pop cultural references (chopped ‘n’ screwed Pokemon raps; Baby T-Pain; a warped cover of Sade’s ‘The Sweetest Taboo’). Live, they’re known for being hit-and-miss. But when they hit, it’s with the force of a ton of bricks – their show at Plastic People earlier this year was a revelation, the duo’s beats and New Agey synths melding with an undertow of monstrous sub-bass.

Winners of DiS’ album of the year 2010 for Does It Look Like I’m Here?, Ohio trio Emeralds make a beautiful cosmic racket. Mark McGuire’s guitar figures are immediately distinctive, tiny looped units that build gradually above heaving walls of analogue synth, rippling like rain on the surface of water. Live their sound is monolithic, forsaking the drones and serenity of their studio recordings for massive blocks of noise and melody that don’t so much wash over the audience as submerge them entirely.

One of those bands that have to be experienced live for full effect, London’s Factory Floor pull off the striking trick of making the brutal catchy, and the catchy brutal. Usually operating at deafening volume, their stark motorik beats are buffeted with stuttering bursts of analogue synth and enhanced by an intrinsic knowledge of the power of repetition. It would be wrong to describe them as hypnotic; while composed with careful sleight-of-hand, their tracks have all the subtlety of a sledgehammer. But they’re heady nonetheless, using cyclical structures to generate peculiar, half-awake states of mind.

The Duluth trio ought to need very little introduction for DiS attendees to OFF. One of the world’s finest live bands on a good day, by virtue both of the strength of their songs and the alchemical vocal combination of Alan Sparhawk and Mimi Parker. Their recent album C’Mon was a continuation of their unending run of form, less stark and forbidding than its predecessor Drums & Guns but no less essential. Over the last decade and a half, Low have become progressively more powerful simply by becoming more like Low, and by this point that’s as high praise as it’s possible to give.

Konono No. 1 have enjoyed an excellent last twelve months, their Assume Crash Position album casting their longform scrapyard dance jams in sharper relief than ever before, and being remixed by the likes of Shackleton and Animal Collective for the Congotronics Vs. Rockers project. But for the long-running Congolese band it’s easy to suspect they’d have continued doing what they do regardless of international interest. Shifting the joyous release of their music onto stages around the globe simply serves to allow more people to experience its power in a live setting.

With close links to Chicago’s jazz scene, Polish duo Mikrokolektyw’s take on the genre is angular and forceful, but not without periods of sublime serenity. It’s driven by a strong electronic element, which lends it both a feeling of forward propulsion and a futurist sensibility. Artur Majewski’s trumpet figures feel strangely anchored in the tangible world when placed in the heavily digitised context of the rest of their music’s constituent components, lending them a sense of hanging tension. Their live performances are largely improvised, furthering their music’s unpredictability.

Part of Mik.Music, one of the few Polish labels to gain a sizeable amount of attention outside of their home country (including regular coverage in Wire magazine), heavily percussive experimental group Molr Drammaz have recently reformed after a lengthy break. Their performance at OFF will combine several sets of drums with electronics and sax, beginning with two or three drums and gradually building in scale to involve all of the band’s past members in a maelstrom of rhythm.

Arguably the world’s finest rock band, Oneida this year completed their monumental Thank Your Parents trilogy of albums with the beatless dystopian haze of Absolute II. Live, though, expect more of what they’ve come to perfect over their time as a performing unit – impossibly heavy, but still danceable, tracks that combine Kid Millions’ furiously inventive drumming with tight motork grooves on synth and guitar. Oh, and the occasional detour into improvisational stoner bliss, developed through the group’s ten hour long Ocropolis performances.

Easily pegged as a close contemporary to Emeralds, thanks to a similar interest in analogue synthesis and seventies kosmische music (as well as releasing another definitive album on Editions Mego last year, in the shape of Returnal), Oneohtrix’s Dan Lopatin is actually closer in spirit to Hype Williams (see above). A relentless explorer/recycler/appropriator of web-discovered pop culture from the last 30 years or so, the main body of his output is made up of gorgeous synth jams, causing an effect akin to total sensory deprivation. At OFF, it’ll be one of those performances where as many of the crowd are lying down, eyes closed, as stood up watching intently.

Reportedly one of Poland’s best live bands, Warsaw’s Paristetris take a catch-all, angular approach to composition that owes something to the Beefheart/Zappa way of thinking, as well as a pop sensibility that veers from whimsical to violent in the space of a single song. Their last album Honey Darlin’ was produced by Moloko’s Eddie Stevens, a connection apparent in its shimmering surface textures – but its edgy, chaotic energy prevents it from reaching anywhere near the same heights of pop polish.

Thanks to Piotr Lewandowski at Pop Up for Polish band recommendations