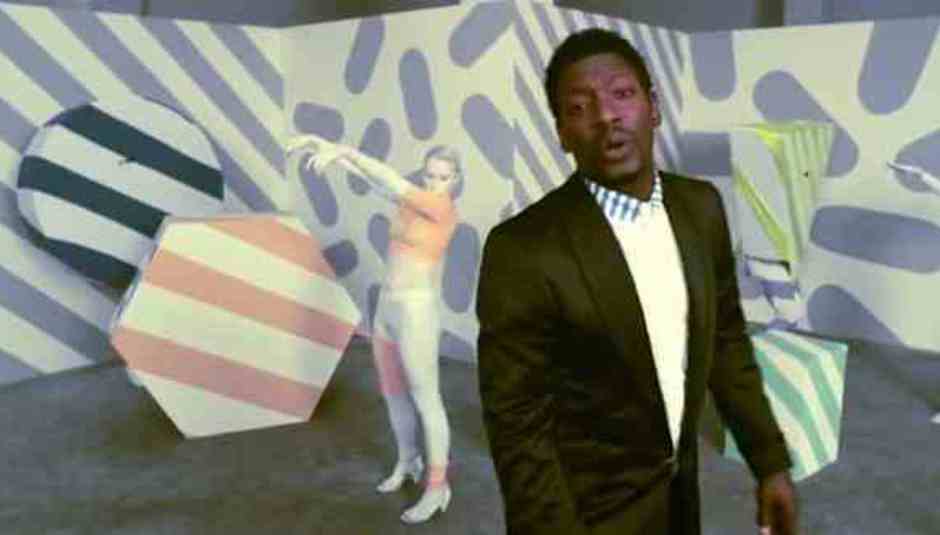 This week's selection includes Joan As Policewoman, Toddla T, Roots Manuva, Bibio, Apparat and My Tiger My Timing. And a funk workout with some overblown flute on it.

I could not be more pleased to see Toddla T chart-chasing and party-starting, not least if it compels Roots Manuva to come over all Brian 'Even When I Say Wrong Things I Am Well Sexy' Ferry. ‘Watch Me Dance’ is by far the most larksome tune you will hear this week, it is the sort of jam that makes you wish you could pull off saying things like ‘Ow!’ on the dancefloor. It also makes want be able to do that gesture where you smooth down both eye-boroughs with your index and middle finger. But without looking like a total prannet. Marvellous!

‘Chemmie’ is about someone putting a wretched spell on your nethers for which there is no antidote, and it is a compelling thing; waltzy, smooth and lilting as the alchemical feelings and acts it describes. It is wonderful, which is why I am doubly annoyed that Joan feels the need to temper her saucy vision and sound all the time – too many of these absurd, campy, arm’s length videos, Joan, TOO MANY. I mean, I get it, I get that she is a vision in heels, I get the arresting and wonky tone of her presentation; do in fact adore how refreshingly unserious a popstar she is. But I no get why – especially when you have written a song as slinky as this one – you would wish to put 'some miles' between you the singer, and we the willing ears. If it is anything to do with her not having the courage of her convictions I am definitely going to pull her to one side and give her a ruddy good dressing down. Such a rare woman! I hope she knows it.

‘Black Water’ hoves into view like you were on one of the Coen Brothers’ beloved, barren roads. It is wavering on the horizon and its headlights aren’t working properly, so you have to do a bit of squinting for the first minute or so. I turned 'Black Water' up, and up again - the listening equivalent of throwing your arms out wide to welcome a new sound; all willingness. But in the end Apparat are damnably difficult, pasting a crackly, sleet-like wash over the whole of their song. It feels like you are listening to it through a grubby window, for all of its pulsing, hesitant duration.

An intriguing funk workout that begins with some inordinately breath-heavy flute, ‘Spy’ sees Laura J Martin sing as if she were a hummingbird, all delicacy and fluttery beauty. It is the sort of curio that reminds me of funk-flavoured, crossover twelves of the mid-90s, and that’s no bad thing. Preview the vinyl above, or hear a full live version here. Sadly you can’t hear the full doomed drama of ‘Spy’ on either.

My Tiger My Timing - ‘Endless Summer’

‘Endless Summer’ is one of those jams that leaves me quanderous, you can’t fault the arrangement of its shimmery post-punk, it is a beautifully composed three and a half minutes in which all the guitar lines dangle like silver filigree chains, and it is blessed with a bassline as clean as a new-build bathroom. I do, however, long for My Tiger My Timing to film in a video in which they are not playing frisbee in a park; frisbee being the accursed pursuit of those who wish to broadcast their larks – it is the outdoor, public equivalent of wearing a t-shirt that says FUNNEST. I mean, there I were, halfway through writing this review, wondering ‘Exactly how dread is frisbee, and what can I compare it to, using words, in order to communicate its sheer hatefulness?’ Then I remembered that passage in A Heartbreaking Work of Staggering Genius. It is the one where our heavenly narrator extols the virtues of frisbee and says how he and Toph are best at it; how they glory in the perfection of long, arc'd throws that are never left un-caught. But I am pretty sure said passage is the exception that proves the rule.

‘If I Keep On Loving You’ is the sort of throwaway punky tune you could have come across in record shops every week for the past five hundred. It is short and daft and has lyrics nobody has spent long nights of the lexicon agonizing over. And it has an effortless, puppyish appeal that reminds you of Pavement at their most scampy. I like it very well; will buy it and shuffle about to it, and praise its easy amiability. But I will never put it on the sort of mixtape that has a not-so hidden message – it is too slight to persuade anyone of anything.

Having been absolutely charmed by The Phantom Band at Latitude, here they are again with ‘O’. I still don't think the recordings quite do justice to how psyche-ily captivating they are in person - it is as if they had written their Moogy manifesto in a somehow smaller font. Still, an eminently cherishable band.

Howler - ‘I Told You Once’ (Rough Trade)

‘I Told You Once’ contains the line ‘Sometimes my mind feels like an ashtray’. This is a problem if only for me, because I have an aversion to smoking being alluded to in pop songs. I think if you are going to include something transgressive in your songsheet, you should at least go the whole hog; half a pint of heroin or a skipful of horse tranquiliser, at the very least. Or maybe it is just that I know it is the sort of lyric I would have been pleased with writing myself at seventeen; and that just makes me remember what a monumental dickhead I was. Stop reminding me of my youthful folly, Howler!

The Middle East - ‘Jesus Came To My Birthday Party’ (PIAS)

Jesus came to The Middle East’s birthday party when they were seventeen but they haven’t seen him in a while. And that’s what they say in a song whose flimsy lyrical conceits should not be compelling but somehow are. This is partly because The Middle East take a widescreen approach - invoking mass whistle-a-longs, campfire strum propulsion and the sort of breathy and breathless female-led vocals that push the button marked ‘closing credits’. So I spent a few minutes revelling in ‘Jesus Came To My Birthday Party’s downbeat, minor key emotage, before realising that it is the sort of song it is hard to get a permaent grip on; I tried to find a well for my fingers but they kept slipping, as if The Middle East did not want me to love them.

The lyrics for ‘Take Off Your Shirt’, which read like a poem on suburban British Saturday nights, are grand. It has ‘tiaras made of plastic gold’, ‘boarded nightclubs’ and ‘hormonal battles’ raged on pavements when clogged synapses allow only the most animal of instincts to forge through. It’s also something of a change of direction if your usual brushes with Bibio come in the form of songs like ‘Palm Of Your Wave’. Because on ‘T.O.Y.S.’ Stephen has abandoned his usual glassy atmospherics and - quite a surprise, this – come over all Phoenix, slamming down power chords like a hairy rock doofus. What a versatile cove.

The Pains of Being Pure At Heart - ‘The Body’ (PIAS)

‘The Body’ begins like a lost OMD b-side. Might I say, it is nice to hear them sounding less cutesy.

The ‘Pacer’ EP’s melancholy electronics don’t sit still for very long - it has sirens and the sort of dreamy, gently-blossoming bass that puts one in mind of weightless planets having a supremely uncompetitive game of Pong. All its twists and turns being almost impossible to do justice to here, do have a listen to the preview thing above. Offshore has been called ‘The UK’s answer to Diplo’ – which, though slightly unhelpful, may well be in response to the delightfully rough-necked and vaguely dancehall vocals provided by Cienfuegos on ‘Pearls & Butlers’. I am very keen on Big Dada at the moment. Lucky old them.

‘Days of Old’ strikes me as glam-rockabilly Status Quo. It is barreling off somewhere jolly. I don’t know if I want to go with it.

While I am able to recognise that I have just sat outside with the morning sun on my fizzog; and that this obviously results in mitigating listening circs; might I say ‘Desert Tracks’ is very pleasant. It is like a Beirut single, but with all the drama and emoting turned down to a manageable, non-alarming and digestible level. Which sounds snitty, as if I am trying to have it both ways. (I am.)


Wendy is on Twitter, here. This week she will be alternately curled up in the foetal position / shaking her weedy fists at the the heavens, all the while listening to Elvis do 'It Hurts Me'.