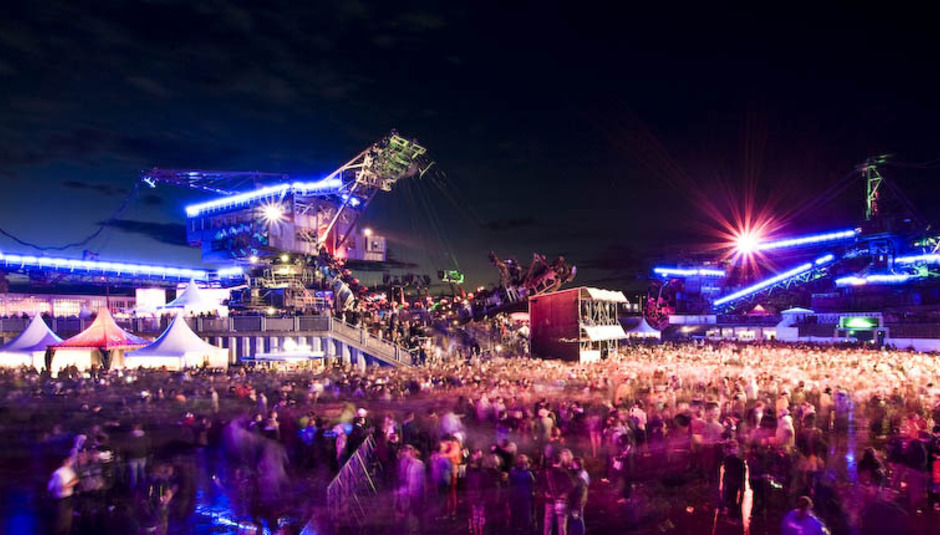 It's easy to forget you’re en route to a music festival when you take the 140km coach ride south of Berlin, winding through acres of sunflower fields and wind farms before reaching the monumental steel city of Ferropolis. It's my second time here, and arriving onsite is no less staggering than last year. You see, whilst ‘some stuff in a field’ neatly summarises most festival backdrops, Melt! takes place in some liminal arcadia that feels as if it's been dredged up from the recesses of JG Ballard’s mind. Machines, colossal machines everywhere. Thousand tonne relics of German industry nestle alongside the stages, with the campsite separated by a huge shimmering lake.

We arrive as the sun sets on Thursday evening, giving us just enough time to sling a tent together before we magically turn Euro coins into premium lager and set sail to whichever tent was blasting out ‘Odessa’ from an old Hitachi tapedeck. BLISS.

The bands don’t start until early evening so much of the day is spent in the company of pastry goods and whatever miscellany of booze we procured from the sleepy nearby village of Grafenhainichen. Three hours later, down by the lake, it starts to feel like one of those old Eastenders episodes where they all sod off to Spain, so thank goodness for Everything Everything. Goodbye heat-induced drowsiness, hello microcosmic guitar battles, yo-yoing falsettos and a blistering set played with triple the urgency of a 999 call. Oh, and they wore matching jumpsuits! There’s literally NOTHING to dislike about them.

Afterwards, we slink down onto the sandy beachfront stage to watch Jamie Woon, whose debut CD I’ve about ground into dust from playing so much. He exudes all the stage presence of me aged five playing a tree in the school nativity play, all hands-in-pockets shuffle and coy looks out to the crowd, but that voice is just way too special to contain and songs like ‘Lady Luck’ and 'Street' are nothing less than stunning. Then again, even if they weren’t - remember - this is all happening on some beautiful beach, so screw you music criticism!

More drinks, then The Drums. I can’t dance like he can, if I could I don’t suppose I’d ever leave the house, I’d just stand in front of the mirror admiring my triple-jointed nimbleness. But they are simply fantastic, and plenty in the crowd are taking up the invitation to go surfing. Maybe that’s not what they had in mind, but ya know, great stuff all the same. Next we enter meme-a-geddon territory with a band so outrageously, so petrifyingly awful that when they came on stage my jaw hit the floor and my tongue fell out like a Rowntrees Fruit Winder. Belfast FM. Don’t waste time reading this any longer, look them up!. Their lyrics mainly fall within the ‘instructional’ category, ‘move your arms up!’ they might say ‘higher, move and flex!’ and all the while the crowd is absolutely LAPPING it up. They are loved, and yet their music, so terribly poor! ‘I DON’T WANT TO GO TO SLEEP EISSER!’ was the eternal refrain left ringing in our ears as we staggered away from the stage, oh Europop, what hath thou dunst? Thankfully Cut Copy were on hand soon after to remedy our frail minds, a band who for all my longstanding adoration, I’d never actually seen live. Lead singer Dan Whitford (or ‘Peter Crouch’) was firmly on top of his game, propelling himself headlong into the crowd during set highlight ‘Hearts On Fire’, and then resembling an extra from an old Supergrass video trying to limb his way back onstage. Now they’ve had a while to settle in, the songs from Zonoscope unfurled beautifully, with their bolstered line-up creating a dizzying, euphoric cocktail of washy electronic noise.

As the night gradually gives way to morning, bands slip off the bill to make way for an illustrious line-up of DJs, playing records until the rest of the world is up and ready for work. We check out Gold Panda for a while (mostly in the hopes of hearing ‘Quitters Raga’ to be honest, we do, and it's joyous) and then spend the rest of the night with Tensnake, whose languorous disco-house crystallises the sunrise perfectly. We amble back to the tent for cereal bars and face-wipes at 6am, exhausted, delighted. Body firmly placed in ‘recovery mode’ for the day, we slurp on smoothies and sit in the shade. A bit like Latitude I guess, only Tim Dowling doesn‘t walk past even once. Five of us play a two-hour category game (famous people who’ve died in the last ten years) and then, lo and behold, it's time for Patrick Wolf. It saddens me to have performed such a critical U-Turn on Mr Wolf in recent years after having loved and cherished his first two albums with all my heart. Bereft of the latent menace and brooding darkness that penetrated his early material, his new songs remind me of pantomime. Specifically, the end of a pantomime where the audience joins in clapping along to a merry old number wheeled out by ol’ thigh slappin’ Buttons up on stage. Patrick Wolf was never Buttons. Not to me. Still, he has enough talent to dwarf the solar system and his voice and virtuoso ability are a miracle to behold. The crowd fall in love with him over the course of the hour, going from groggy unfamiliarity to boundless joy in record time. It was all rather delightful, to be honest.

Say what you will about The Streets, Mike Skinner certainly knows his audience. To be precise, he knows his audience only really want to hear songs from the first two albums. Thankfully, he was more than happy to oblige with a monumental set. ‘Turn The Page’ was the undoubted highlight, booming from the speakers as if summoning some ancient force to rise from the Earth. Original Pirate Material then, still fresh as a daisy nearly a decade on. I was curious to see how songs from These New Puritans latest album would come across live, although my curiosity dissipated about 30 seconds into opener ‘We Want War.’ Such a dense, production-heavy album sounded like a slowed down recording of a car-crash live so we hotfooted it over to Metronomy, catching about 0.000004 seconds of Beady Eye en route. Still, worst nanosecond of my life. If you’ve seen them in their current four-person guise you’ll know that Metronomy are in the habit of absolutely killing it these days, and tonight was no exception. Joe Mount (aka Nicest Man in England) (aka Nicest Man in Europe runner-up) was on exceptionally charming form, crafting what essentially sounded like a greatest hits set from two albums worth of material. In contrast Editors sounded positively banal, their dead-weight songs limping earnestly from the stage, rendered impotent by the glittery laser-beams firing from the machines overhead. Lasers > Editors.

A one-two knockout combo of Digitalism and Junior Boys to round off the night and our dancing shoes were in serious need of a bloody good cobbler. No such luck though, the likes of ‘Pogo’ and ‘Zdarlight’ caused near riotous levels of exuberance from the home-crowd, whilst Junior Boys carried us off into the early morning on an altogether more relaxed tip. Until that is my personal song of the year ‘Banana Ripple’ got an airing, at which point I somersaulted over the moon.

Rain. So much rain. Too tired for category games now. Two cereal bars left. Went over to see Jose Gonzales, whom I mistakenly thought was Chilly Gonzales on the programme. He wasn’t, therefore my only return on getting drenched was some gently melodious finger-picking. A bum deal if you ask me. In all honesty this was all about one band, this was Pulp-day, a band I never thought I’d get to see live. They were astonishing; Jarvis Cocker possessing more charisma than should reasonably be able to fit in one country, being EXACTLY what you want Jarvis Cocker to be. A born artist, taking off his jacket at one point to examine the label, then throwing the contents of his pockets into the crowd (a Mars, two apricots, a Snickers, some tissues.) From the moment ’Do You Remember The First Time’ came tearing out of the blocks through to the towering finale ‘Common People’ this was more than just ‘a performance‘, it was ‘an experience’, and one that left me almost levitating with joy. F.E.E.L.I.N.G C.A.L.L.E.D.L.O.V.E you might say. See you next year Melt. Xxxx