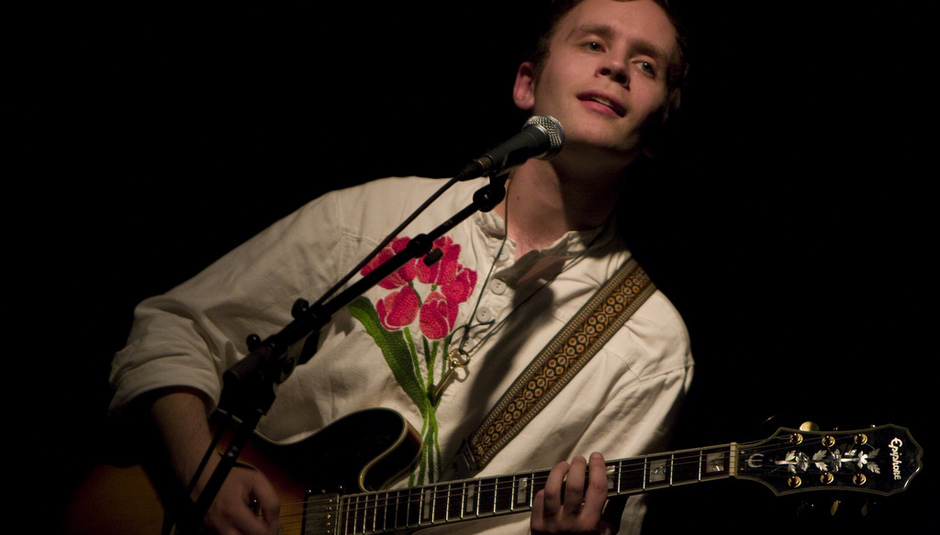 Well, I'm mightily pleased that we made it to 100. Through all the trials and tribulations of the past two-or-so-years that we've been doing these things it's mostly been a pleasure. The plan was to originally compile a greatest hits of Spotifriday for the hundredth edition with the Top 15 or so most featuring artists all making up the playlist. Alas, that never came to pass, so here's the tried and tested format of "some things which featured, in one way or another, on our website over the past seven days or so". It has The National, Girls, Electrelane, Iceage, Hefner and some more. Listen to it here. Here it is, then.

Girls have been in the news a couple of times this week, firstly for announcing a few UK shows later in the year and secondly for sticking out a free download of a track, 'Vomit', from their new record, which is released later in the year. This track is NOT from it, however.

It seems to be the time of year when bands are announcing their Autumn releases and Veronica Falls got in on the act this week, confirming the release date of their self-titled debut, through Bella Union. If it doesn't have Beachy Head on it then they will have made A GRAVE MISTAKE.

Recently Electrelane announced a reformation, which was nice. This week they played at the Scala, which went down quite well, I think. They also initiated a non-hostile takeover of our website's editorial content, the index of which can be found here.

Wolf Gang did not get a very positive review this week for the album Suego Falls. It's fine. Not everything can be fantastic and I'm sure some people like it. Let's not get too down on the issue. Listen to this song to judge for yourself.

The lead "singer" of Cerebral Ballzy has very long legs. He puts them to good use to lean on things, jump and climb and generally cause a modest menace to anyone within leg's length. They played Latitude, too, which we reviewed here.

The National also played! They are much revered by many people. If you want to know what Wendy Roby thought of that particular performance then I suggest you head here. This one is, roughly I guess, about ENGERLUND.

This is the title track from Iceage's debut record, something we quite liked. It's not especially groundbreaking stuff, but it is quite fucking enjoyable, a bit like Cerebral Ballzy up there. Of course, this may not be entirely your thing, in which case avoid it. Obviously.

This is a song about the fourth man on the Moon, as the lyrics make abundantly clear very early on. It's a poignant song this week, what with the last of the space shuttles touching down for the last time. It's quite heartbreaking in many ways, really. Where do you go once you've been on the Moon? Dead Media got re-issued. Read about it here.

Funnily enough, Hefner also had a song called Come On Sister, but I am fairly certain this is not the same one. It was released as a single this week, where Wendy Roby said it was "sneaky as a mid-period Paul Heaton lyric and oh boy is it ever jolly, it has lollipops in both hands and a smile so wide you could wedge a frisbee in its maw. I appreciate that younglings hate hearing how you mellow as you age but it really is true, and not painful at all - the point being, you do not give a fig. All the rules you set yourself in early life simply fall away. And then one day you wake up and find yourself writing reviews which justify your interest in pop music SO cosy, you could live in it."

Great news! Jens Lekman is FINALLY releasing some new material. It's in EP form and is called An Argument With Myself. It'll be released on September 19. Read more about it here.

The final song in this week's playlist comes from Shrag who are from Brighton. It is because of that reason they feature in the fifth instalment of the Drowned in Brighton series along with some other bands, like Tense Men and...Fear of Men.

Click here to listen to this playlist and here to have a gander at our fairly massive archives. Americans, come on in, we have plenty!