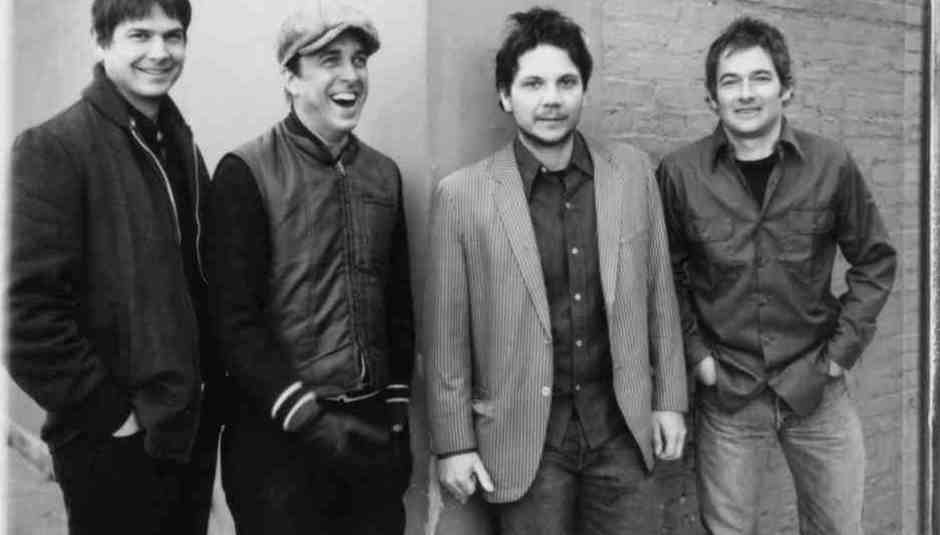 I am not a Wilco superfan, but I count ‘Hell Is Chrome’ amongst one of my favourite favourites, it has exploding piano that sounds like a heavily medicated Ben Folds, and even its super wanky guitar solo makes me very, very glad. Anyway, it has been a while, but here on ‘I Might’ they have gone super propulsive and called in generous dollops of jaunty Hammond and busted speakers and it definitely becomes them. Listen closely and you will hear lyrics that mention ‘piss and blood’ but I won’t mind if you LA LA LA LA LA right past them like I did, being in the mood for a very FM pop song but ignoring the fact that it is really about well bad things.

I realise that in many ways, one should be aghast at Belle & Sebastian; listening to them these days is like running into someone proper rebellious from your long-gone schooldays and hearing they work in insurance, own a cagoule and have a husband called Brian. But I do not feel this way, I like how utterly strange and incongruous grown-up Belle & Sebastian are, how you can listen to their sheened pop music without ever imagining they wrote songs about rape in chalet parks; stealth pop, it is. ‘Come On Sister’ is sneaky as a mid-period Paul Heaton lyric and oh boy is it ever jolly, it has lollipops in both hands and a smile so wide you could wedge a frisbee in its maw. I appreciate that younglings hate hearing how you mellow as you age but it really is true, and not painful at all - the point being, you do not give a fig. All the rules you set yourself in early life simply fall away. And then one day you wake up and find yourself writing reviews which justify your interest in pop music SO cosy, you could live in it.

Having managed to avoid Beady Eye before now, I told myself it was very definitely in the interests of science that I would review their latest. I then had a powerful (powerful) daydream in which I imagined some bleeding heart no-mark indie label founder telling me off for writing about it when there were more deserving artists – hairshirted ones, who bleed dirt and sweat obscure Belgian b-sides. And then I remembered how, while at Les Eurocks, I stood in front of some Beady Eye merchandise and giggled at their dreadful t-shirts, that employ the sort of font you would see on a fancy dress website to illustrate ‘the 70s’. And then I looked at the clock and thought, enough of this smarthousing.

Men being her out of Le Tigre and some other dudes, and ‘Simultaneously’ being some tropicalia-doused pop that spends a lot of time dazzling you with inordinately pretty (but ultimately directionless) shimmery guitar lines - before calling in a modish vocal that sounds like it has spent a year in the company of eye-rolling teens. In many ways this single is a perfect Blue Peter time capsule candidate, for it is a bit bored, slightly frigid of air and tries to cover all bases including the one marked ‘dance’. By all of which I mean, 'Simultaneously' is quite now. I mean, it is all great and amazing and yes, but I know it will last about a month on my pod before I replace it with something marvellously lasting, like a Hall 'n' Oatses jam.

And old tune specially released on big plastic for the fans, ‘What We Have Known’ is a reminder of a gentler, less cynical age, when your musical crush was only known to you and did not star in fashion campaigns. And this is hard to explain as someone who does not like to call it shopping, preferring the phrase ‘curating a wardrobe’. I don’t know why it is so disappointing to see what few blazing and utterly original creative women THE MEDIA presents us with inhabiting a public role in which they have Mulberry bags named after them, but I know that it does disappoint. Unlike ‘What We Have Known’ of course, which is fresh and startling as it ever was. The Media! Like ‘society’ and ‘this country’, you are so ruddy confusing.

As we are not allowed to think that ‘Let England Shake’ is anything less than flipping amazing, and as I sort of agree that it is, perhaps you will forgive me if I say that sometimes when I listen to PJ I wonder how long she spent on the melody. This has a vocal line that would be best described as dithering, going UP when it is not MEANT to, a mouse gone wrong. I’m not saying it’s not good, I’m picking holes because I am spoilt and really, really mean. And it’s not as if the arrangement surrounding Polly’s wavers is not brilliant, because ‘Let England Shake’ has proper plonky keyboard flourishes that are tinkly tonkly enough to accompany a Sesame Street animation of the numbers one to ten.

‘Actors’ is a syncopated, breathy pop song whose rumbles and strums would struggle to scare a Shetland Pony. There is nothing wrong with this of course, but one wonders exactly what we are meant to glean about Elephants from a single like ‘Actors’ – especially when I think singles should be three-minute manifestos, a statement of intent. If this were an ideological pamphlet it would beg you to read it, saying please and thank you too many times for comfort. Which is not to say it is not charming, but I think I prefer my sevens with just a tiny bit more fire in their belly. Though I happen to consider most modern pursuits – especially those online – almost entirely without purpose, it is not as if we live in an age where everyone is flooded with spare time. And I want this song to shout at me. Stop fannying about and STRONG ARM ME, ELEPHANT.

The marvellous photograph of S.C.U.M. on the press release presents them like bad orphans, all the petulance of the world is theirs. They don’t care if you buy their record, they don’t care if your stupid fingers miss it in the rack, your adoration is a matter of supreme indifference to them. It also suits them to share a label with the likes of Grinderman, not least because Thomas Cohen will not bother singing when an articulate scowl will do just as well. Every syllable and sentence on 'Amber Hands' comes at you with its legs far apart, the microphone might as well be a poo on a wire. By all of which I mean, there is a lot of atmoss on ‘Amber Hands’, a gothy drone that very nearly manages to overshadow the fact that there is no barricade-breaking actually occuring here. You do not need to print out a new genre label for S.C.U.M. or create for them their own shelf. I’m not sure I care, they almost certainly don’t.

While not strictly relevant what with part of my job being the ability to approach music in a cool, dispassionate fashion, I am going to point out that Seams comes across supremely well on all his internets; I think being (or being able to pretend to be) a nice dude is important. It is also nice to see how on ‘Focus Energy’ he has directed his efforts towards The Floor, so that unlike his previous outings (which included ‘found sounds’ – a concept that strikes fear into my heart) there is a Bladerunner bassline, housey snipped ladysighs and an actual DROP at about 4:15. No, it’s not exactly Higher State of Consciousness, the drop here being more akin to an access ramp. But Seams has gone all dance, and I think it becomes him.

I could almost get to like Glasvegas, they are turning into a band whose predilection for pomp will shortly see them tip into utter self-parody, and regular readers will know that this is when my ears start to prick – I count absurdity among my favourite traits in music. I mean, the escalating solos and the sheer bleeding weight of Glasvegas’ torment here is so darn silly and unselfconscious, I almost (almost) have a grudging respeck for it.