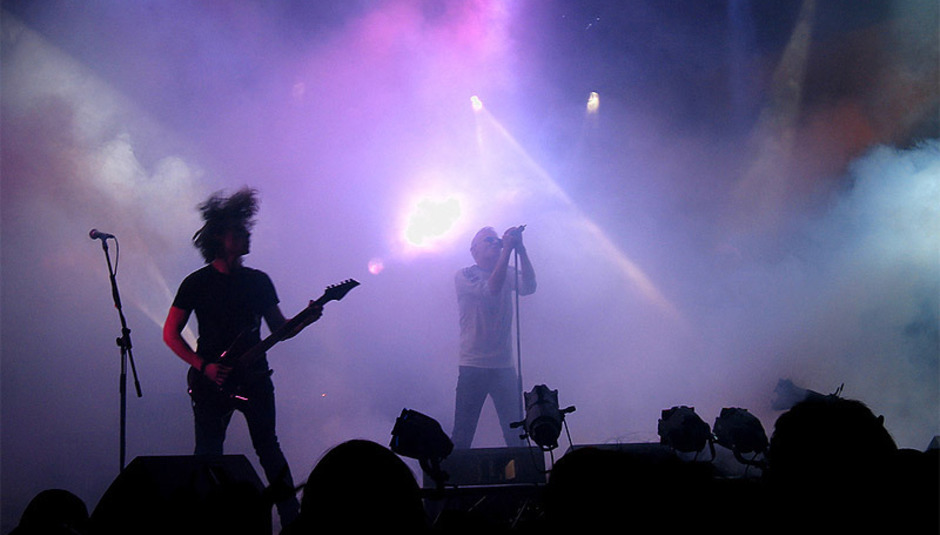 Following on from the first part of our preview for this coming weekend's Sonisphere Festival, DiS thought it would be a great idea to try and pin down one of the most influential bands of this or any other generation you'd care to mention.

Elusive and notoriously difficult when it comes to talking to the press, his fractious relationship no doubt enhanced by certain sections of the media's ridiculous insistence on referring to him as "The Goth Overlord" or whatever, Andrew Eldritch stands tall as a true icon. Having formed The Sisters Of Mercy with guitarist Gary Marx in Leeds at the tail end of the 1970s, their music pretty much dictated the state of the the UK's underground scene for the next decade. Since then some three albums later, band members have come and gone with alarming regularity during their creative years, founder member Marx included, while Eldritch's subsequent relationships with the band's record labels Warner Brothers and East West has been indignant to say the least.

Nevertheless, despite not having released any new material since 1993's single 'Under The Gun', their music still sounds as fresh and exciting as it did from the outset. Furthermore, having been cited as a major influence by the likes of Metallica, Nine Inch Nails, My Chemical Romance and a host of others, it would be fair to say they're anything but a spent force riding the nostalgia train. Indeed with several new yet unreleased songs in their locker, we can only live and hope that one day a fourth Sisters record will emerge.

In the meantime, when DiS was presented with the opportunity of an (albeit brief) question and answer session with Eldritch and guitarist/bass player Chris Catalyst, we were only too happy to oblige.

DiS: Whereabouts are you based at this moment in time?
AE: My passport says that I'm a resident of the Netherlands. Never mind. The band is based in Leeds. It always was. Leeds is in the People's Republic Of West Yorkshire. That's in the North, where real people live.
CC: I'm based in Leeds, the spiritual home of the band. Ben lives in London, the spiritual home of.... the Queen!

DiS: Sonisphere will be your first UK festival appearance for 20 years since Reading in 1991. Are you excited or even nervous about playing such an event, particularly as many attendees probably weren't even born when the Sisters first started, and what made you choose Sonisphere as the one to mark your return in terms of a UK festival?
AE: We weren't counting numbers. We never need to. Thanks for pointing them out; we've already forgotten! We're always excited and we're never nervous. That's why we headline festivals.
CC: I can't wait. I went to see Oasis at Knebworth when I was 16 - does that lose me cool points? And it's an honour to be playing at the scene of so many amazing gigs. And Robbie Williams!

DiS: Are there any other bands you're looking forward to seeing over the course of the weekend and will you be staying for the duration of the festival?
AE: All of them. We want to go there.
CC: The Big Four, obviously, although the last time I saw Megadeth in Lisbon they were hilariously poor. Motorhead are always great, and Slipknot will surely be amazing. I love Rolo Tomassi too, plus we'll go catch my mates Pulled Apart By Horses and no doubt drink heavily with them afterwards.

DiS: There are an awful lot of unreleased songs documented across various parts of the web attributed to The Sisters Of Mercy such as 'Still', 'Romeo Down', 'Crash And Burn', 'I Have Slept With All The Girls In Berlin', 'Far Parade' and 'We Are The Same, Susanne' to name half a dozen. Are there any studio recordings of these and will any of this material surface officially in the foreseeable future? At the same time, is there any other new material which you've been working on more recently and do you envisage a fourth Sisters album in the future?
AE: Yes to the first part of the question and no to the second. We don't know whether there'll be a new record at this present moment in time.
CC: Not this week.

DiS: Without meaning to dwell on the past too much, a lot of what was reported in various sections of the media at the time would suggest your parting of ways with certain former members of the band - and I'm thinking of people like Gary Marx, Wayne Hussey, Craig Adams and Patricia Morrison as examples here - was less than amicable. Do you have any kind of relationship with any of your former colleagues these days, and if so, how would you describe it?
AE: I don't...
CC: Andrew never talks about the past. It's like it hasn't happened. Either that, or he can't remember it.

DiS: It's fair to say that The Sisters Of Mercy were one of the most innovative and influential bands of the past thirty years. What do you consider to be your legacy?
AE: Intelligence, fun, and a lifetime of self-abuse.

DiS: Looking at the way the music industry has imploded to some degree in the 21st Century, do you think a band like The Sisters Of Mercy could have emerged and survived in the present climate?
AE: No. I tell Warners where they went horribly wrong, but they don't read my emails. They're too busy playing golf, with Cowell's outtakes in their buds. They will die. We understand the net and we write good code. We're not friendly, but we're very connected.
CC: See, I had a long conversation about this with a very esteemed producer friend of mine recently. His take on it is that "The Good Will Out", and I tend to agree with him. Take from that what you will. We live in a world where more and more people demand and receive crap. The few that don't will demand better and better. This is not a bad thing.

DiS: Do you get to hear much new music or see many live shows nowadays, and if so, are there any current bands out there you genuinely admire at present?
AE: Motorhead? Motorhead? Motorhead? Does it get any better? Motorhead!
CC: I am at gigs either playing, working or boozing three or four nights a week, and if you scratch the surface, there is some great stuff out there. There's a lot of great stuff in Leeds - the aforementioned PABH, Dinosaur Pile-Up, Lone Wolf, False Flags, The Plight and so on. Leeds is particularly blessed, it's brilliant here. I seem to be going a bit more rock in my old age. The best two gigs I've seen this year have been Torche at the Brudenell Social Club and Kverletak at The Well.

DiS: You've had a very fraught relationship with the music press over the years, once describing journalists as "pondlife". What is it about the music press in particular that has accentuated these feelings?
AE: Yes. Don't push me.
CC: With no disrespect, I see all the interviews that come to Andrew and most of them are absolute bollocks. At least this one is interesting. So many of them dwell on fashion mishaps of the past or a bass player that joined for ten minutes in 1974. And they're incredibly badly written. I'm a bit of a reading junky, so it's nice to see something interesting occasionally. I can see why Andrew reserves his biggest ammunition for journalists and record companies, put it that way...

DiS: When The Sisters Of Mercy first started, Leeds seemed to have quite a vibrant music scene, something which could be said of the city today. Do you see many parallels between the late 1970s/early 1980s and the post-millennium emergence of labels like Dance To The Radio and Bad Sneakers, venues like the Brudenell or Nation Of Shopkeepers, and numerous artists you've previously mentioned such as Pulled Apart By Horses, Lone Wolf, Dinosaur Pile-Up and False Flags to name but four?
AE: I could go on for hours. You know how I feel.
CC: Leeds is brilliant. You should move here. There are bits that are becoming increasingly xenophobic, but I think that's happening everywhere. The EDL attacked an anti-racism gig at The Well the other week, smashing windows and so on. Clearly idiots. But the good bits are amazing, and you can spend a very fine afternoon walking from one side to the other. The buildings are amazing too.

DiS: Andrew, You've made your feelings known over the years regarding America and its ideals. Do you think that the rise of the Tea Party movement on the right of US politics will have implications for the rest of the world if they manage to have significant success in next year's elections?
AE: Again, I could go on for hours. Pass me the ammo...

DiS: In terms of the setlist for Sonisphere, will it be a mixture of old and new material?
AE: It will.
CC: As ever, yes.

DiS: Are there any plans for a full UK tour in the near or foreseeable future and if so, are there any towns, cities or venues which past experience has taught you to avoid?
AE: They still spit in Cardiff. We do not want to go to there.
CC: We're doing Glasgow as a warm-up for Sonisphere, and we're doing London in November. Touring is my very favourite thing in the world, but it's more fun to go abroad to do it. I just like the constant surprises. Record shopping in Norwich, trying to find somewhere to park in London, a particularly fine pizza in Bristol, the amazing toilet at Glasgow ABC... oh and the gig bits are pretty good too!

DiS: Finally, looking back through your extensive back catalogue not to mention musicians you've collaborated with, is there any one particular record, line-up or period in time which you would consider to be definitive of The Sisters Of Mercy?
AE: That's not going to happen. I like the future.

For more information on The Sisters Of Mercy's whereabouts, visit their official website.