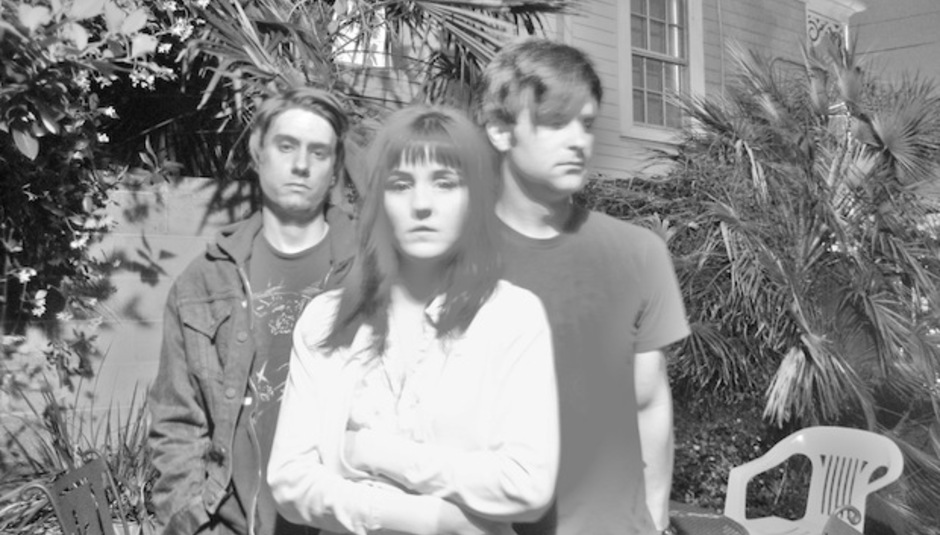 When Covered In Dust, the excellent debut by New Orleans trio Kindest Lines landed on the doormat last month, it took us somewhat by surprise. Not least due to the fact that its creators were something of an unknown quantity, with little in the way of any information about who they were or what possessed them to make such a delightfully mesmeric long player. Having tracked them down via their label Wierd Records, we managed to get some time in the presence of the three core members - vocalist-cum-synth player Brittany Terry, guitarist Jack Champagne and drum machine operator Justin Blaire Vial. New bassist Chris Capedeville is not present. What we found is a band brimming with ideas and enthusiasm, even if we are still a little perplexed at how just three people can create something so huge sounding.

DiS: Who formed the band and when did Kindest Lines first come to fruition?
Justin: Me and Jack hadn't seen each other for several years. Jack's band broke up and I moved back to Louisiana to deal with an illness, and during that time I decided to buy a keyboard to help pass the time. Jack came over to teach me how to play it, and by the end of the day we had written a bunch of songs. I had heard about Brittany through a friend, and after about a week of stalking her out I finally introduced myself to her and asked her if she wanted to join us.

DiS: New Orleans has a tradition for jazz as opposed to most other forms of contemporary music. Was it difficult for the band to become established from the outset or is their a growing underground scene developing in the city?
Jack: There has always been a very strong underground scene here, but it's overshadowed by what people perceive as New Orleans Music. If you're a touring band, no matter the genre, you will always have a band to play with and a floor to sleep on here.
Justin: Yeah it's a little difficult. This city has a very strong musical history, and we don't seem to fit in with a lot of it. I think there is a little bit of a stigma towards electronic instruments and heavily effected guitars and vocals. People are very traditional and can be very guarded against sounds that aren't completely organic. We've had more than a few shows where people looked at us like we were from another planet!

DiS: Your music seems to be influenced predominantly by UK bands from the 1980s such as The Cure, New Order and The Passions. Would you say that the British alternative scene from that period pretty much shaped the way independent music sounds today?
Jack: The US And UK have been influencing one another for years now, but in the time period in which we grew up British bands were more prominent.
Justin: British music from the 80's and 90's is very important to us, but it's really just a piece of our puzzle. We are just as into 60's girl groups, psych, soul, Italo house, film scores, rap, marching band music, and whatever else happens to catch our ear at any given moment!

DiS: At the same time, there seems to be an underbelly of Stateside acts sharing influences, such as Wild Nothing, Beach Fossils, Woods and Crystal Stilts to name four. Do you see Kindest Lines as having any kind of kinship with these other artists, or is it just pure coincidence that a number of bands inspired by similar sounds and eras have broken simultaneously?
Brittany: I don't know much about the others, but I'd certainly be honoured to have any kinship with Wild Nothing. Pure coincidence for me.
Justin: While I really love all of those bands, it is definitely coincidental. We didn't start this band with any specific sound in mind; we all just sat in a room together with some instruments and this is what came out of us. But if anyone wants to put us in a category with those other bands none of us would argue. I think they're all amazing.

DiS: Your debut album Covered In Dust has just been released by Wierd Records. How did your association with the label come about and is it a long term arrangement?
Jack: I've been friends with Glenn and Frankie (Wierd night DJ's) for a few years now. I sent them our demos, which they passed on to Pieter at Wierd, who then asked us to play his weekly night at Home Sweet Home. After the show he asked us if we'd like it if he put out our record. He's been great to us, and we all hope our relationship lasts as long as we do.

DiS: Listening to the album it actually feels like more than three people are involved, such is the vast array of different sounds and ideas contained within it. Do you play as a three-piece live, and if so, is it difficult to replicate some of the instrumentation in a live setting?
Brittany: Live as three in the beginning, now four people with new bassist, Chris.
Justin: We try to do as much as we can live. Brittany sings and has a synth, Jack plays guitar and has a shitload of pedals, I man the drum machine and play either one or two synths, and live bass guitar. We're also toying with the idea of adding some elements of live drums as well, but I'm still figuring out the logistics of it all. We try to mix it up as much as possible live, to give the audience something they can't get from just listening to the record at home.

DiS: One of the most prominent facets are that Brittany Terry's vocals seem quite low in the mix, almost to the point where the majority of the lyrics are inaudible. Was that a conscious decision or more a case of how the production on the record turned out? Brittany: We wanted to incorporate vocals into the mix to feel more as an instrument, rather than stand out as the most important element.

DiS: How long did it take to write and record the album and in hindsight, is there anything you'd change or do differently with the record?
Justin: Most of the songs were probably written within the first few months of us forming. We probably spent the better part of a year tweaking the demos to a point that we were happy with, and then recorded the whole thing over five days in Chicago with Alfredo Nogiuera and Josh Eustis at their studio. We had a really great experience with them. The only thing I would change would be to have more time to experiment with a few things, but I think we're going to be doing some of the recording for the next one ourselves so we should have lots of time to build up the sounds and try some new stuff.

DiS: The reactions and reviews so far have been unanimously positive such as our review here. Were there any expectations around Covered In Dust prior to its release?
Justin: No expectations on our end, but any love we get is greatly appreciated! This band started out as a bedroom project. We didn't know if anyone outside of our circle of friends would ever hear any of this. We made our music for ourselves, but it's really amazing that people have heard it and are receptive towards it. As a musician, I don't think you could ever ask for more!

DiS: Will there be any more Kindest Lines releases in 2011?
Brittany: We're hoping to have a few new tracks to play throughout the tour, but still unknown about recording.

DiS: Whereabouts will you be touring and are you planning to come to the UK?
Jack: We are doing two weeks with Xiu Xiu up the East Coast and Midwest, and then three more weeks on our own down the west coast and back home.

DiS: Are there any new songs in progress?
Jack: We always have ideas that we are working on, but for right now we are focused on promoting the album and playing as many shows as possible.

DiS: Finally, what are your plans for the rest of the year, both with Kindest Lines and any other musical projects you may be involved with?
Brittany: I'll be spending most of the year with these dudes! Maybe I'll play some more shows with Mc Trachiotomy..?
Justin: I'm going to learn everything I can about music production and start getting to work!

The album Covered In Dust is out now on Wierd Records. For more information on Kindest Lines visit their Blog, Facebook, MySpace or Soundcloud pages.