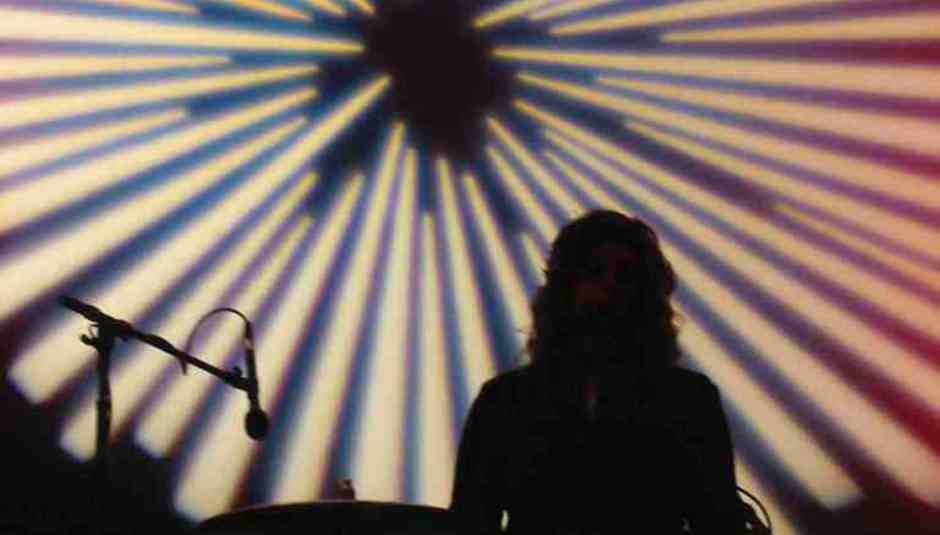 By the time you read this I will be in Fronce, speaking Fronch. Sexy.

Low call ‘Especially Me’ a ‘little number’ in the hactual lyrics of their hactual song, the dread and rotten understaters. And it makes me livid; no one should make a whole album with lyrics this sparse that still provoke the listener to rip out their hearts and trample on same for being quite the useless organ. I mean, honestly. What sort of daring scoundrels have the cheek to write ‘Especially Me’ - or ‘$20’ for that matter – repetitive songs which make a virtue of plainness; ordinary girls are not meant to win pageants. And yet they do, so darn darned Low and their fulsome chutzpah.

Worse, having decided that in order to make a successful song one need only repeat strong sentiments ad infinitum until menace and drama gather as if at a free money party, they then prove an important point; useful in life as well as music. You see, you can always add aural tinsel - here a synth twinkle, there a bass whomp - but the real talent, the real ACKFING GENIUS, is when you let simple ideas stand for themselves, almost entirely unadorned. I am pleased to inform the reader that when ‘Especially me’ is on you could whomp an axe in your own forehead, right in the middle. And as the red trickled slowly down your cheeks nothing of your countenance would be troubled, you would in fact reach your tongue to greet the slick, blissfully unaware that anything were amiss. Music this simple should not be this transportive. Ooooo, they're almost too good.

Metronomy - ‘The Bay’ (Because Music)

Having thoroughly enjoyed reading the comments underneath Metronomy’s YouTubular - in which the residents of Torquay object to the rose-tinted and thoroughly saucy presentation of their home town, I then took ‘The Bay’ for a turn about the yard. Which is when I realised just how flipping clever Metronomy remain; two years ago one could not so much as shimmy for synth pop, I thought me and it were done for. And yet, here they are, the exception-proving rule monkeys, sneaking about with their faultless songs when I was double sure I had bolted and Yale locked the door. What is happening here is plaintive and melancholy disco and it makes me happy as a knee-slide on a polished parquet dancefloor. Slinkly as a slippy nylon sundress, ‘The Bay’ deserves to make its entrance late, side-saddle on a white horse, before quietly telling everyone else in music to jog the uckf on.

Evans The Death have written a song about watching a well bad documentary and then being annoyed because they can’t get it out of their heads. This is a good subject for a shonky shuffly pop song and I know what they mean; one turn about Jan Švankmajer;s Alice was QUITE ENOUGH FOR ME THANKS VERY MUCH YOU POLISH STOP FRAME BASTARD MENTILIST.

‘That’s not a documentary, Wendy’.

While in principle I adore what is happening here, and while minor key propulsion remains one of my favourite things - especially if it issues forth from men who express themselves through the medium of whine - there is something in ‘Jejune Stars’ that fails to penetrate. It’s lovely and it’s fully formed and all its sounds are in exactly the right places but ‘Jejune Stars’ remains at arm’s length even though I am pleading with it; let me in. All you buggers are high man, chewing your cheeks and rolling your eyes, and I am stood at the edge, going ‘BUT MINE IS PARACETAMOL’. Damn you, humanity.


‘Girls on medication, oh girl of my dreams’ sing Caged Animals, who prefer their ladies a little on the dulled side. It helps that they do not so much sing as sneer, in a drawled way that seems to indicate they might inhabit a Prozac haze themselves; the overall affect being one part Stereolab to one part beach-based fuzz. So while I should quite like to get in a snit about the sentiments expressed here, I would be wrong not to acknowledge that this song has a neat circuity. I mean, if you are going to put in a request to the love aisle of the Cosmic Order, it might as well be for a beau whose prescription matches your own. And then you can feel about six out of ten, all day, every day, together.

I still absolutely love TEED, they proffer the sort of bouncy melancholy my woman-mind nearly always responds to. ‘Trouble’ has the sort of calm air that belies its skill - it is careful, precise music that always reminds me the last day of a perfect holiday; burnt skin, shiny eyes, lightened hair and saying goodbye to Pedro. Or was it Raul. I forget.

‘The End Of Time’ uses for its backing a tune that puts me in mind of my first Casio, though the smiles it causes are rather more genuine than those that greeted the youngling me. I was wrong to push it, Nanna understood it was not me playing the tropical chords but the thinness of jokes does not apply when you are small, punchlines are not worn out by repetition. This sorry remembrance is appropriately halted so I have time to tell you how Computer Magic is making the sort of ache-filled jam that blinds you with shiny while it secretly buries some sad into your brain. It’s :) and it’s :( ! Like most things.

Sprinting past the rather unfortunate and hugely misleading EP title, it is worth pointing out that ‘Badmind’ here is a strange treat; its creepy narrator reading poetry the ‘internet’ tells me we can attribute to James Laughlin. And as This Sort Of Thing unfolded to the accompaniment of wonky chimes it occurred to me that what we have here is a crazy mess, but a crazy mess it was impossible to ignore for all of its four minutes and forty two seconds; and which sounds like nothing else this week. Why yes it does scream ART PROJECT, but everybody be cool, because it’s good; an Open University lecture for those who studying a BA (Hons) in being thoroughly unsettled.

‘Flaws’ is doing some very special pleading here, and it means to tell you most sincerely how it is feeling over its bleeps and slides. But it is so damnably earnest I am sorry to say I have put it on speakerphone while I go about the important business of doing the washing up. I will keep saying ‘Yeah, I know, I KNOW, awful’ until it flipping well calms down.

Rough Trade’s latest foray is some exceptional folk that happened to my stereo and person at a fortuitous moment; I had just had an horrendous afternoon and was feeling uncommonly furious with myself. And though I would not wish any of you to deliberately ape the dread circs that lead to my listening to ‘Honey In The Rock’, I am shameless enough to tell you I listened to it and had a good old cry; let it all out, tra la la, eating worms, nobody loves me. With a sparsity of arrangement that recalls Jeff Buckley’s Pa and a slow, creeping pace, ‘Honey In The Rock’ manages the rare feat of employing lyrics like ‘my hair is wet with midnight dew’ but not being remotely slappable - and I did not even want to reach for a Toddla T mixtape, even though one must have balance at all times. I don’t even mind that Mary mentions Dog.

You will be pleased to hear this single was just as magical when everything was alright again. You have to go down to go up, you know.