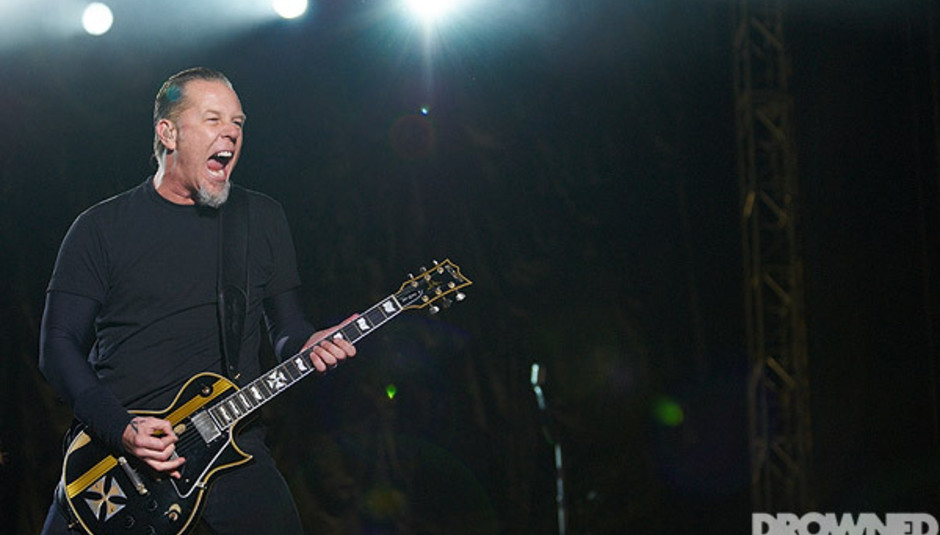 Next weekend (Friday 8th July), DiS will be making its annual pilgrimage to Knebworth in celebration of all things metal. Well almost, as this year's bill features a fairly diverse set of acts that even the most ardent lover of all things RARRRRRRRRRRR!!!! would struggle to classify in that particular genre.

While the big talking point will no doubt centre around the appearance of thrash metal's "Big Four" sharing the same UK stage for the first time ever (and why not?), a quick scout through this year's line-up sees a fair smattering of DiS-friendly homegrown acts (Blood Red Shoes, Rolo Tomassi, Pulled Apart By Horses) alongside legendary artists from the first waves of new wave (The Sisters Of Mercy) and post punk (Killing Joke) respectively. Throw in some radio friendly hip hop (House Of Pain), progressive space rock (The Mars Volta) and some of nu metal's biggest selling artists (Limp Bizkit, Sum 41).

For a glance at the full line-up visit official Sonisphere website. In the meantime, here's the first part of Drowned In Sound's Sonisphere 2011 preview, whereby we've put together our guide to ten artists we'll be checking out over the course of this weekend.

Part two follows tomorrow, featuring a rare interview with The Sisters Of Mercy.

Regardless of your preferred taste in music, it's difficult not to have formed some kind of opinion on Metallica. Thirty years old this year and still going strong, they've overcome tragedy (original bass player Cliff Burton's untimely death in 1986) along the way to becoming arguably the biggest heavy metal band on the planet, selling in excess of 100 million albums along the way. Now with nine full-length albums under their belt, sessions for long player number ten are said to be well underway and going well, with the projected release date still hoping to fall somewhere in the latter part of 2011.

Making their second headline appearance at the UK leg of Sonisphere, expect nothing less than an explosive, career-spanning set to bring the first night of the festival to a blistering climax. Just don't mention Napster if Lars Ulrich is in earshot...

Also, like Metallica, Anthrax celebrate their thirtieth anniversary this year. Despite not being that prolific in the studio this past decade, their early career actually saw them usurp Metallica in terms of commercial success for a short time in the late 1980s. Again, as with James Hetfield and co., they're set to unleash their tenth studio album in the autumn, provisionally titled Worship Music. It will also be the first Anthrax record in twenty years to feature Joey Belladonna on vocals alongside fellow members of what is considered to be the "classic" line-up, guitarist Scott Ian, bass player Frank Bello and drummer Charlie Benante. Expect a lively set and an even livelier audience up front. Just don't get Caught In A Mosh...

Slayer may be the most unlikely band you'll ever hear on Radio One (their 'Criminally Insane' single was playlisted in the daytime back in 1987 - honest!), but to these jangly guitar and fuzzy reverb loving ears they're the ultimate metal band. Indeed their show at 2007's Hove Festival has to go down as one of the greatest live performances these eyes and ears have ever witnessed, and with the band's original line-up restored to mark (Yes, you guessed it) their thirtieth year in existence, expect nothing less than 110% pure, unadulterated metal.

Perhaps the most surprising and in some ways controversial addition of the "Big Four" considering founder member Dave Mustaine's history with both his former colleagues (Mustaine was ousted out of Metallica prior to the release of the band's debut long player Kill 'Em All) and heavy narcotic abuse. It would probably be fair to say that Megadeth never really fulfilled their potential as recording artists, yet on their day they're an unstoppable force live, as last year's excellent Rust In Peace live LP ably demonstrates. Having gone through over twenty members since their formation in 1983, it's to Mustaine's credit that he and founder member Dave Ellefson are still together. Anything could happen, and with twelve studio albums worth of material to choose from, quite possibly will...

Winners of this year's "What the hell are they doing on the bill?" Award they may be, but make no mistake about it, after last year's storming performances at Reading and Leeds, Rivers Cuomo and co. could well steal the show here. While those of a purely indie disposition are silently hoping for a Pinkerton heavy set, a simple trawl through their near flawless back catalogue tells its own story. They may even throw in a few obligatory covers along the way like last year's homages to MGMT, Lady GaGa and Wheatus, and whether you find that appropriate or not, you can bet your bottom dollar it will be better than the dreadful excuse for MGMT's 'Time To Pretend' churned out by Paolo bleedin' Nutini at Glastonbury last weekend.

The undisputed champions of post-punk and all its media defined sub-genres, Killing Joke are one of the true visionaries to come out of the UK underground scene since the first wave of punk. Led by the enigmatic Jaz Coleman and currently featuring all four members of their original line-up, recent shows have been said to be among their best ever, something DiS can vouch for having been blown away by earlier this year at both Nottingham's Rock City and London's Electric Ballroom respectively.

The Sisters Of Mercy

Only a fool would pass up on the opportunity to see one of the most influential bands of the past thirty years. Having formed in 1979, The Sisters Of Mercy can lay claim to being instrumental in the development of various genres from industrial to shoegaze, and with a back catalogue that's simply to die for, Andrew Eldritch and his current band of associates could well be the highlight of the entire weekend. Just don't mention the four-letter "G" word, otherwise things may take a turn for the worst.

If we were to list the reasons why pretty much everyone associated with DiS loves Blood Red Shoes, we'd probably take up a whole week's worth of content. Nevertheless, the incendiary racket stirred up by Laura-Mary Carter and Steven Ansell still has many people shaking their heads in disbelief that they're only a two-piece. As a bonus, expect to hear a smattering of new material as we're led to believe album number three is almost ready.

Contradictory and well-connected in certain quarters they may well be, but we defy anyone present not to be taken aback by the sheer intensity of Flats back-to-basics punk rock. Now signed to One Little Indian with their debut long player imminent, Flats evoke the spirit of 1980 without the smell of patchouli or under-nourished dogs on string, and that people, can only be a good thing.

Yes, we know their biggest hit and best known song is standard fare for the Yates and Walkabout crowd every Saturday night, and we're also fully aware that frontman Everlast has a tendency for foot in mouth disease every so often. However, back in the day, Irish-American trio House Of Pain were a breath of fresh air to the hip hop community, and say what you like about everything that came afterwards, but their first long player and Bowie-sampling 'Shamrocks And Shenanigans' in particular still kicks ass with the best of them.

In Photos: U2 @ Glastonbury Festival ...