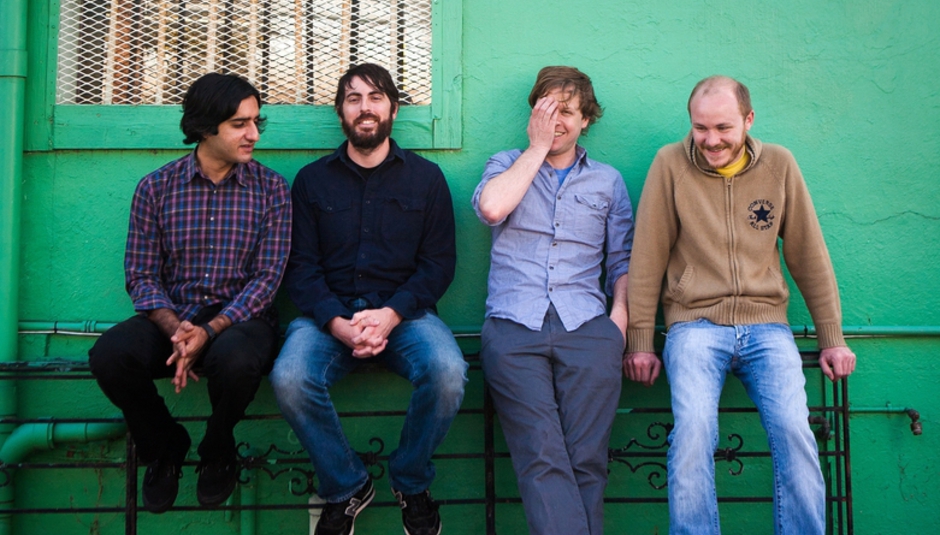 It has been 4 years since the last album was released – why the long break?

The big part of it was because we were on tour so much for the last album, we did two years of touring and we can’t write on the road. Songwriting for us takes a long time, so the time we spent on tour, and then getting back and spending time apart meant it took us a while to get back on the same page…to decide what type of album we wanted to make, what type of sound we wanted to make, it wasn’t anything that we really planned.

Do you think that the hiatus has had any tangible effect on your sound?

It’s hard to say…I would say yes, but I would be hard pressed as to say how. Being able to get away from playing with each other, to be able to reflect on sound that we want to make, I guess it had an influence however I wouldn’t be able to say how, or what effect it has had.

Since your first release, 6 albums ago, how do you think you have progressed musically?

The main difference I think is the sound of experimentation and we feel there is a little bit more of that on the new album. Whether it is recognisable to outside ears I don’t know, but experimentation and uncertainty play a big part in our sound. With the new record I feel there is more of a sense of uncertainty and mystery to it, pushing our boundaries. To my ears that is the biggest difference.

You emerged when post-rock as a genre was in full swing, do you think your music is still relevant in today’s musical landscape?

You have frequently professed your love of your home town, Austin, Texas, in what way do you think that Austin has shaped you musically?

Well, Austin is such a great town for music. There are so many people that go to shows and support musicians. There are loads of small venues and big venues and so much going on musically. Austin gives you the drive to keep going, you can always find a show, you can always find people to watch music with and to talk about music with, and there are always people who want to hear music.

Austin has kept us going when we thought we shouldn’t keep going or didn’t want to keep going, but Austin kept us going because there are always people who want to hear music and it’s a big motivator.

On stage you have built up quite a reputation as one of the best live bands out there, what do you reckon is your key to success, and do you think there is something about your music that perhaps lends more to live performance than to that on record?

I don’t know…I think something we used to be worried about is being a boring live band so that was something that motivated us. Not that I hate boring live bands, it’s just that the shows that I like are the shows which are passionate and intense, so we have always strived to achieve that.

It can be difficult with instrumental music, without having a vocalist to focus on so it makes us work harder to maintain that intensity. Playing live I guess there are lulls between the loud parts that are easier to play live and to keep peoples attention, and playing the more delicate parts…it is all part of the intensity that we always try to achieve when we play live. Watching good live bands you can feel when they have the intensity and it makes us want to replicate it.

You used to appear quite frequently supporting Four Tet – do you have a close bond with Kieran Hebden? Would you cite him as an influence or vice versa?

Absolutely on both counts! The first time we met Kieran when he was touring the States with Fridge in 2001 or 2002 and we played a few shows with them. We got on really well with those three guys, Kieran, Adem and Sam, and after the tour we kept it in touch with them. Adem and Sam were doing different things at the time but Kieran kept making music, so when we toured England we arranged to play a few shows with him. We love to play shows with our friends, and the more we played the more we got to hang out and the closer friends we became.

I remember when Rounds, the first Four Tet album came out, I thought it was the most amazing thing I’d ever heard.

And absolutely on the second count, he is someone that we admire as a friend and also as a musician and I have listened to and loved all of his releases.

What do you think of his progression into more dance-orientated production? Can you see yourself going through as abrupt a sea-change musically?

I love Kieran’s more dancier stuff, it maintains what I loved about his music, the complexity and the layering of samples, and adds something new to the mix. It is something that he has managed to achieve, to change his sound while remaining totally distinctive.

That is something that is relevant to us, we have a particular sound that people recognise immediately, and at the same time we try to develop.

I don’t know what will happen next to us. The problem with being too contrived, to suddenly decide to “make a dance album” or to “make a metal album” is too forced. Our sound will hopefully change for the better in a more natural way, hopefully we will continue to change but I can’t say what direction we are going in.

With the new album, we tried writing songs that were different, there are songs that have more of a dance feel, others that have slow grooves we haven’t done before, to our ears anyway. We hope that people we see that, I mean the album hasn’t been released over there in the UK yet and we hope people like it, but most people we’ve talked to here say it sounds exactly the same (laughs). So I don’t know.

We don’t want to over think it, you want to make music that is like the music that people grew to love you for, but you want to grow, and you want it to be natural and not be too forced.

You’ve said that you have been mellowing out over the past couple years, would you say you are therefore looking forward to your upcoming tour with anticipation or trepidation?

Much more anticipation, with touring I guess it is always a “the grass is always greener” type situation…I haven’t been home for quite a long time without touring for a while so I am quite anxious to get on the road, to play shows, spend time with the band getting really tight. I love touring because it is such a focused and busy time, there is always something to do, and you’re never bored, so yeah I am very much looking forward to this touring cycle.

I guess we’ll be doing this for a year, a year and a half off and on, so by the end of it I will probably hate the music and hate the band and want to sit alone in my room for a month, but at the moment I’m really looking forward to it.

They are playing your new album in full tonight at the Greenwich planetarium – would you say your music is fitting of the setting?

When I heard that I thought it was a perfect place. Instrumental music is made to have a public playback where people don’t talk and where they listen to the music, and that can be more challenging without vocal elements to listen to. So yeah, to have cool visuals and be able to sit back and latch on to the music, it’s perfect. I wish I could be there as I haven’t been to a planetarium show for a while, and I think it will be really cool.

What’s to come in future, will there be another hiatus do you think or will Explosions power through?

Right now we don’t have any solid plans, the hiatus we took before wasn’t planned, in a way I hope it doesn’t happen again. Hopefully we can tour and then write music and not wait for four years for next album. But sometimes, that’s the way it goes

We write music very slowly, it takes a long time so it’s hard to know when we have another album but we all want to but we all have desire to play and to play music people love and to make something beautiful and that’s what we want to do.