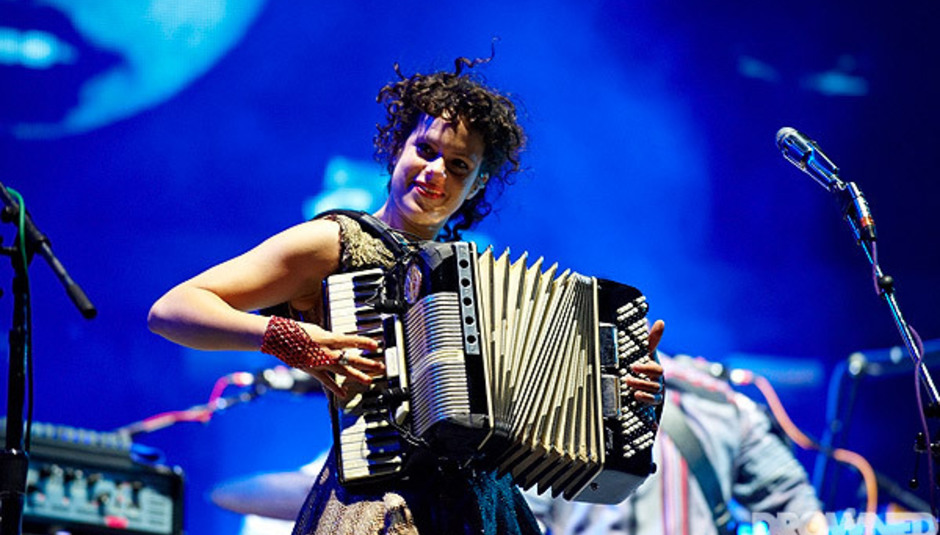 For me, 2010 has been one of the most exciting years in music since the turn of the century. As well as being memorable for literally dozens of amazing records being released this year (check the DiS Top 75 Albums Of The Year or more to the point, some of the records that didn't make that list for further proof if any were needed), there have also been just as many, if not more, unforgettable live performances to revel in.

When I was asked to detail my top ten live shows of 2010 my initial reaction was "Cripes! How can I whittle this down to just TEN?!?" After days of soul searching, discussions with friends that bordered on arguments and finally arriving at the decision making hurdle, here they are, in no particular order. Well, apart from the first one that is, which would probably rank highly in my top ten live music experiences of all time:-

Without meaning to sound repetitive or echo other statements already made on this year’s event, it would be fair to say that Arcade Fire pretty much stole the show, certainly at Leeds at any rate. While the hyperbole surrounding high profile reunions and the never ending "will they/won’t they show?" saga surrounding Guns’n’Roses appearance threatened to submerge the whole weekend in controversy, Win Butler and co. simply let their music do the talking, whilst curating the most perfect setlist imaginable from their admittedly colossal back catalogue in the process. What’s more, the newer material from The Suburbs such as ‘Ready To Start’, ‘Empty Room’ and ‘Month Of May’ didn’t sound out of place or inferior at any point to it's more familiar elder siblings from Funeral or Neon Bible. Instead, their ninety-minute set simply confirmed what many people had already suspected in that they can now add “Best Live Band On The Planet” as their latest accolade. Simply astounding, and unlikely to be bettered anywhere else this year.

Two bands long viewed by many as spent forces, yet both quite simply turned back the clock for a combined three hours worth of brilliance that suggested they'll be doing this kind of thing for a few more years yet.

As with Arcade Fire, their rise this year from underground favourites to genuine mainstream contenders has been nothing short of sensational, and last month's brief visit to UK shores demonstrated just how far they've progressed.
DiS Review

This year's annual northern A&R fest belonged to one band and one band only - HEALTH, and DiS had the honour of giving them the platform to do so. Simply awesome.
DiS Review

While Interpol the album was slightly disappointing after three years in the making, this introduction of the record plus new members Dave Pajo and Brandon Curtis was a resounding 'Success' (pardon the pun), particularly as the set was heavily adorned with highlights from both Turn On The Bright Lights and Antics.
DiS Review

Those RoTa shows on Saturday afternoons can sometimes prove rather hit and miss, but this three band event showcasing Northern Star Records latest compilation was something to behold, particularly the exhilerating performance of The Domino State, surely one of the most underrated bands anywhere at this moment in time.
DiS Review

Having seen Wild Beasts a grand total of nine times this year, I could probably have chosen any one of those shows in this list, but the way they oozed the charisma and confidence to own this year's Dot To Dot Festival at Nottingham's Rock City stands out above the rest. Only just mind...
DiS Review

In a similar vein to Wild Beasts, the Selkirk five-piece's mid-afternoon slot at this year's Latitude was probably intended as little more than a practice session for the bigger names lined up to headline the various stages around Henham Park that day. That their performance was the main talking point of the entire weekend speaks volumes.
DiS Review

If playing on one of the more remote stages at a predominantly dance-orientated festival while Dizzee Rascal entertained an endless stream of punters from the main stage isn't bad enough, a subsequent loss of power through their guitar amps can only mean one thing - go acoustic. That they did, and with it managed to pull off a most astonishing set that can only whet the appetite for 2011's impending follow-up to last year's Hospice long player.
DiS Review

While relationships may have become strained between DiS and The Telescopes in recent years, there was no escaping the fact that this Taste era dominated set exhumed both a nostalgic sentiment and unerringly present day focus, frontman Stephen Lawrie aided and abetted superbly throughout by up-and-coming Londoners One Unique Signal.

While not quite making the top ten, honorary mentions must also go out to No Age for their sheer energy and relentless devotion to the cause at this year's Offset and In The City, Spiritualized for turning the clock back to 1997 in gracious style at Matt Groening's ATP, and Gaggle for making me smile amid whoops of joyful delight at pretty much every festival I attended this summer.

Andrew from F*ck Buttons: “Why The Lu...