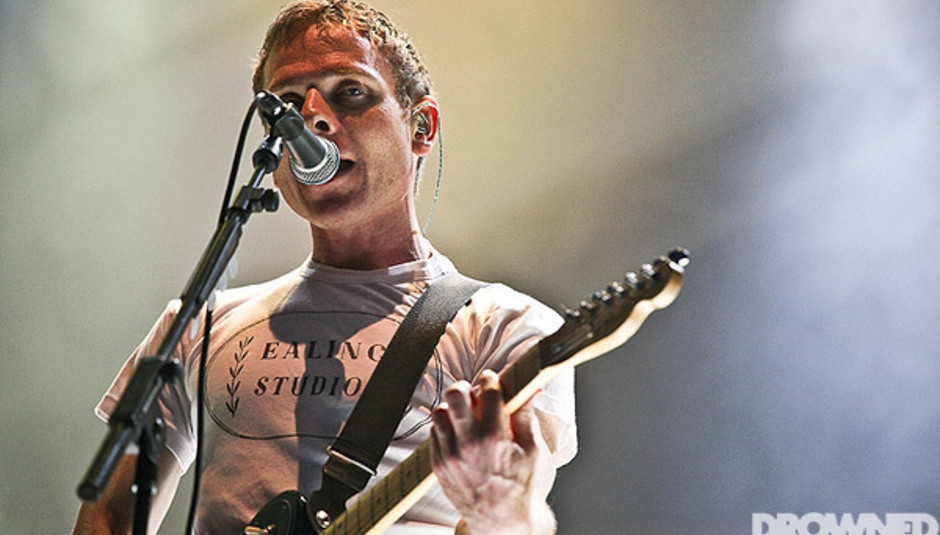 The first thing that happens on Saturday morning is Anglia Television sticking a massive camera in our faces. ‘WE ARE ASKING GIRLS IF THEY FEEL SAFE BECAUSE THERE HAS BEEN A GANG RAPE?’ is what they say, and though we mumble through shock (because we did not know what had happened), afterwards I am angry with myself for talking to them. I think the following:

All horror aside, it is a strange thing, and I think it makes some of the people I talk to over the weekend look upon the festival site with more pointed, cynical eyes; and perhaps it makes them feel that the crowd seems unfriendly, and this is why people say this year was ‘laddy’. But I do not feel like this, I think what happened is tragic and appalling but it doesn’t make me feel less ‘safe’. I spend the entire weekend with brilliant women talking about pashes, anti-pashes and disastrous liasons. My Latitude could not have been more girly. [I hate the word 'girly', I hate myself for using it.]

Weirdly - and in the hope this does not read like a Richard Madeley link of the ‘And that was our item on women being attacked. Here now, is something idiotic about drinking in a field’ variety – Saturday is lovely. Because at least for me, being An Old, it is a festival go-slow day. We drink pear cider while watching a man who has gone a bit wrong (he is standing on top of the long-drop-loos, shouting at people using them and doing crucifixion poses), I meet a snaggle-toothed bongo man in his 60s who asks me if I am ‘a dancer’ (I know what you mean, bongo man, you sly old dog), I take in all the teenagers (some of whom are wearing full-length unitards with glittery sleeves, of the sort you would wear for stage school acrobatics, they look AMAZING), there are loads of girls with garlands in their hair, and, AND, I spot Emma Kupa from Standard Fare not once, but twice. I never thought I could spot the People of Indie.

Then we go to see Standard Fare, but to listen, rather than elbow each other and point at them. She has an orangey-red bass guitar that looks well old and good; and it has a pearlescent pick plate [What is this actually called? No, you look it up], because everything associated with this woman is brilliant. And she hasn’t half got a gob on her, and her guitarist has the cutest grin on his face for the whole set, and they do a song with the line ‘Wow, you have such a big house, and you seem so normal. I don't know what you see in me,’ in it [YESSSS] AND there is something of the Jonathan Richmans about them. Then I become convinced that they have all the freshness of a sixth-form band - but a hundred times the ability - and that is why they are so good.

After a short path through the woods, I trot off to the Sunrise Arena, which is the least successful of all Latitude’s playparks. The stage is draped in green, yellow and blue striped sheeting, and it looks very like a village fete marquee – disconnected from the tent itself and lacking somehow. I am here to see The Lost Levels, who go from space rock distort to supermassive tunes and then back again, and who remind me of ten bands at once. They are also an enticing proposition when the alternative is the 40-something indiekids watching James - even if I am later told James (or rather Tim) is ‘Mmn, good, sexy’ by a friend. But this then leads to a row about Men Who Do Yoga & Go All Spiritual Wonk & Is This Forgiveable, and then Gaggle do a procession through the main drag in multi-coloured cloaks - with pennants and a banner that says ‘This is merely a distraction from the inevitable’ (like the crazy art project wimmin they are) - and then, then, it is Crystal Castles.

Alice Glass looks like a cartoon. Not in a Jessica Rabbit way, but there is something a bit Emily The Strange about her; she is poreless and sharp of fringe and eyeliner. And it is not that they are not compelling, I mean, she is drinking neat Jim Beam from a bottle that still has the security tag on it (ooooo), she is hitting the cymbals with the mic and draping herself over the speakers, spent. But she then says three times that if anyone finds the rapist/s they should ‘CASTRATE THEM’ (this is unhelpful, at best), and I am afraid it becomes a little artful, designed.

Or at least so I think, until she starts crowd-surfing, and someone clearly does something rank and witless to her (I am told she is groped, but I don’t see this, I just assume that’s what has happened), and it all Kicks. Off. She shouts what looks like ‘You wanna fuck with me, bitch?’, throws punches into the crowd, gets out again, goes back for more twice (sometimes singing, sometimes not), more shouting, hits someone with the mic, shouts ‘You’re punching ME? What the fuck?’, sings again, receives boos, and then does a massive 'flob' at the crowd. She then flings the mic at the stage and walks off. I ask the people next to me what they think of all this and they say ‘We are waiting for Belle & Sebastian and some nice tunes.’ And the thing of it is, this is a shame, because ‘Baptism’ – near the beginning - sounded flipping brills.

By the time Belle & Sebastian come on, we are in need of something stately. And Oh Lore, they do not disappoint; all-a-sudden it is Here Come The Grown Ups and there is a full string section and a red old-cinema-curtain backdrop. Stuart Murdoch is wearing a darling Ealing Studios t-shirt, he conducts the crowd with a flute, and then he tells us how someone in the band has had an odd dream about Latitude, in which they played ‘Jumpin’ Jack Flash’. And then they PLAY ‘Jumpin’ Jack Flash’ all-impromptu, it all goes off, and I realise that if I were Belle & Sebastian, I would be FURIOUS about being called fey or twee, they are not AT ALL. They are too clever for words; a class apart. Before ‘The State I Am In’ Stuart tells us he had expected us all to be really old, but how instead, we are ‘all young things’ [smart move, Stuart, smart move] and then it is ‘Step Into My Office Baby’ which is too, too hilarious for one like me who spent many years being treated like a tit in a pencil skirt in offices. And they are slinky. The whole thing is about forty minutes of glorious, we are sated. But being spoilt, we still head off in search of after-fun. We do not need it, though. Saturday saw me full on scale the heights of being one of those arseholes who brayingly tells his friends at 7pm ‘Guess how many bands I’ve seen today? NONE! Hahahahahahahahahahahahahahahawhyisthatgood?’ Anyway, LATITUDE IS MORE THAN JUST A MUSIC FESTIVAL... sooooooo... yeah, we kick the day off by queuing for Daniel Kitson for the best part of an hour, which is Well Worth It, as he tells a lovely, beautifully detailed story about two people who almost but never meet that veers from hysterically funny to quite funny to Andrzej isn't here he's choking up now. Over in literary, Bret Easton Ellis is kind of a dick as he bitchily deflects virtually every question poor Miranda Sawyer puts to him, but he’s tremendously entertaining, and seems much more happy talking about American Psycho than his new book, which is, er, fine by basically everyone, I think. We then see about a million comedians in a row, I think my favourite is Angelos Epithemiou, so there you go.

So yeah, Crystal Castles. What I thought I saw on the big screen at one point was Alice Glass being supported by a crowd of, let’s not beat about the bush here, children, with one of them having their hand on one of her breasts, rubbing it for quite a long time, and then about five minutes later she started smacking them with the mic, and about five minutes after that she was shouting “If you grab my fucking tits I’ll kick you in the head”. This, astoundingly, is the account of what happened from the horrible little oik wot did it (check out some of the comments... wowee). Anyway, I could get into a treatise about the politics of whatever, but the fact is that Glass at the very least invites a degree of conflict, as does the band’s music in general, and the collision of Crystal Castles and the Latitude festival is one of the most magnificently edgy things I’ve seen in a long time. I’m not condoning groping, but at the end of the day the little shit did get smacked around the head in response, and if you choose to separate this incident from wider criminal incidents around Latitude 2010 as a whole (which I think you should) then that sense of discomfit and danger, when combined with the sort of juggernautically filthy beats that a completely anonymous Ethan Kath is spewing out, makes for something powerfully, wonderfully wrong. Even the poppier songs off the new album sounds way out of place here, and by the time it comes to am end it's just one big, savage noise freak out, which may or may not end their set early, but tbh I'm as exhausted as they probably are by this point. Anyway, fuck knows what the organisers were thinking, but this was amazing.

By contrast Belle & Sebastian fit the Latitude bill a little too comfortably for me... so much so that I’m struggling to feel a real sense of occasion to this being their first UK gig in fuck knows how long. The same definitely doesn’t go for the chap from Absolute Radio who introduces them an impressive half hour before they actually take to the stage with some odd spiel about how they appeal to people who like the smell of second hand bookshops, which – rather crushingly for the poor chap I imagine – Stuart Murdoch takes umbrage with as soon as he walks on stage. Anyhoo, Belle & Sebastian have a lovely big orchestra (with a conductor and everything) and are charming and stuff, but I dunno, it’s all a bit accomplished for me... ‘The State That I Am In’... ‘Sleep the Clock Around’... objectively these are incredible and on some level I’m taken back to a hazy Nineties dreamworld where I was young and didn’t really know what was happening and everything was new and intimate and exciting... but I dunno if I can really translate songs that I associate with being alone with a radio two decades ago to this big, polished singalong. I’m probably just bitter they don’t play THE SETLIST OF MY DREAMS (the encore would be: 1. Century of Fakers, 2. Electronic Renaissance, 3. Lazy Line Painter Jane, 4. This is Just A Modern Rock Song). Anyway, it’s pretty good, maybe I’ve just lost my twee over the years. ‘Legal Man’ OWNS, tho.