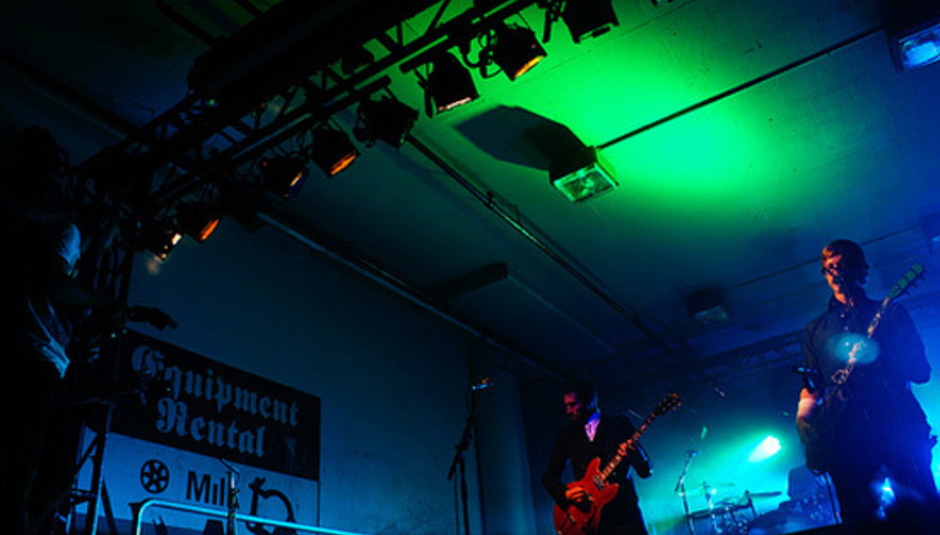 It’s fair to say the crop of New York bands who made the turn of this century so exciting have suffered with age. The Strokes are a mish-mash of side projects and ego, The Rapture disappeared when everyone with a cowbell got their hands on the blue-print and whilst Karen O and her Yeah Yeah Yeah’s remain a joy the feeling remains that The Big Apple’s class of 2001 has gone off. The same broad evaluation can be made on a smaller scale when it comes to arguably the finest of the early noughties NYC breakout acts, Interpol. Though remaining consistent, few would argue that the band have progressed and the recent departure of their most iconic member, bassist Carlos Dengler, could be interpreted as the beginning of the end.

However, now four albums into their career and playing an intimate show to introduce their new, self-titled record, Interpol seem more confident than ever - triumphant even. The loss of Dengler is felt only in the style department as former Slint man Dave Pajo steps into his bass playing shoes effortlessly (though he isn‘t wearing a gun-holster which is a shame). Additionally, backing the four piece up and adding muscle is Secret Machines front man Brandon Curtis on keys and backing vocals. You can understand why Dengler quit Interpol, not one to sit still creatively he has regularly scored movies whilst his band craft yet more brooding, epic rock anthems. However the move might well work out well for both parties as minus his stern presence Interpol look lighter, happy and eager to please.

Kicking off with ‘Success’ from the new album, Interpol immediately set the tone for a night of hard hitting intensity. What follows is essentially a Greatest Hits set from a band with a massively impressive back catalogue. In between the likes of ‘C’Mere’ and a slick rendition of ‘Evil’ the crowd are treated to cuts from Interpol’s latest album, released this week. The record itself is a typically stoic, hard stare of an album that sees the band consolidate all that is great about their formula and dispense it liberally. Choosing to play the relatively upbeat ‘Lights’ and ‘Barricade’ is perhaps not representative of the stately pace of the album but sees the brand new material sit nicely alongside established favourite ‘Narc'.

It is that same gentle pace that can be such a divisive factor with Interpol. What is meant to be strong and patient can come across as well, boring, and moments of Interpol’s career have seemed more like a test of patience. These moments have come not least, during the bands past live shows. Distant and ice cool, the detached stares and booming dark material has often lacked that relatable personal touch which makes live music so engaging. Whilst there are similar ebbs this evening, they feel more like points of rest than defining behaviour as yet more tracks from a stunning catalogue of material washes over the exultant audience. Plus, the new look Interpol seem genuinely happy to be here, Paul Banks thanks the crowd whilst guitarist Daniel Kessler skips and flirts with the audience in front of him, all the while firing a string of razor sharp riffs at them.

As a closing statement, Interpol choose to remind us all what a truly classic album Turn On The Bright Lights is. ‘Obstacle 1’ throbs violently as Banks dreams aloud about “Stabbing yourself in the neck” with an added air of menace before any threat of harm is washed away by the beautiful ‘NYC’. For a man who regularly sounds formidable and brave, ‘NYC’ allows Banks to drop the steel and breathe. Remaining intense but allowing emotion to colour between the monochrome lines the words “New York Cares” resonate as Interpol appear fragile for the very first time. Going by the audience participation and collective swoon, nobody cares more about Interpol than London this evening.