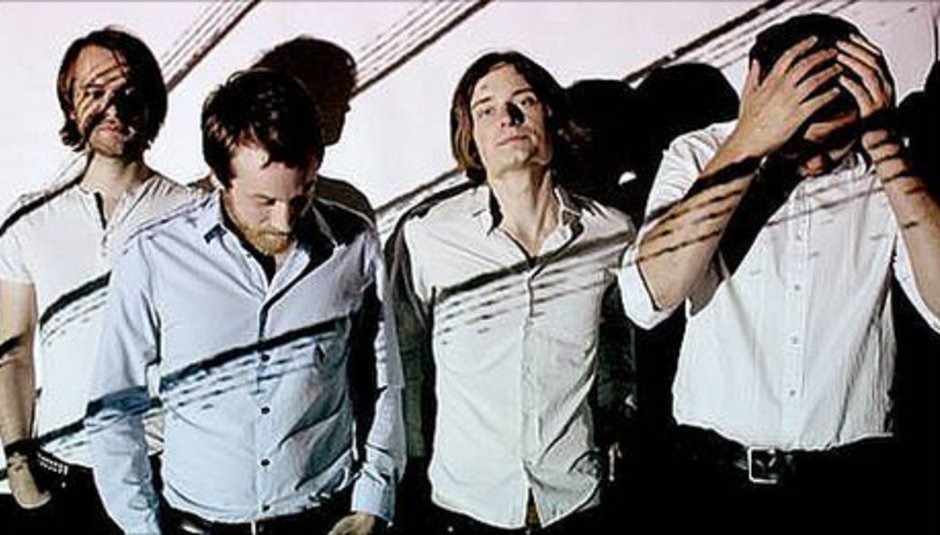 The fourth installment in our ongoing series of local scene reports from our scribe in Leeds.

We’ll begin this column with the sad news that Grammatics; a DiS Neptune prize nominee last year, have announced their decision to call it a day and have unfortunately played their final gig. Their self-titled album never found the mass appreciation it deserved despite being a fine set of diverse songs that were immediately brilliant whilst full of immense depth. We will wait with eager ears for whatever Owen Brinley does next, but before their departure they left us with a final EP ‘Krupt’ which you can preview ‘Stalinesque’ from here.

We are fortunate to still have a wealth of active bands in Leeds though, including Dinosaur Pile-Up, who recently released their long awaited debut album Growing Pains. It includes a mix of exhilarating new songs alongside a few of the old favourites that first brought them to our attention. Fans may be disappointed by some omissions from the tracklisting but Matt Bigland shows he has an abundance of monster riffs and lethal hooks in his arsenal, with the addition of punchy new tracks including 'Barceloner', 'Mona Lisa' and 'Birds & Planes'. Myspace

I Like Trains are back, and they’ve been harnessing the power of the internet! Their second album He Who Saw The Deep was handily funded using the Pledge website and, in testament to their well justified popularity, the necessary target was hit within 24 hours. The resulting second album shakes off the 'Post Rock' tag clumsily offered by many following their debut LP 'Elegies to Lessons Learnt', with the reverb turned down slightly and David Martin’s brooding vocals given a little more room than before. Personal highlights include the soaring guitars of 'Sirens' and the mechanical precision of Simon Fogal's drums on lead single 'A Father's Son’, the video of which is below. Myspace

James Owen Fender released his debut single ‘The Cloud’ last month which preludes an album in early 2011. The vocals place him amongst a minority of artists mentioned on this column, for singing with his distinct Yorkshire accent. All credit to him for doing so, as it provides the chorus with an instantly likeable, uplifting zeal. The accompanying video below makes me loathe Leeds’ lengthy distance from the coast. Myspace

Fans of Ellen and the Escapades, Vessels, Holy State, and Mi Mye should also keep a look out for new releases very soon…

In polar opposite to when I last wrote this column there's now a flood of gigs happening in Leeds. The recent months have been making me a very poor man, trying to make paychecks stretch with the help of a super noodles based diet. I've chosen a few of the more interesting things coming up, for more comprehensive listings you would be wise to visit the mega useful Leeds Gig Guide.

After the recent Play Pattern and Brainwash festivals comes the inaugural Constellations Festival which takes place across the three venues within Leeds University Union on the 14th November. It’s very aptly named when you see how many stars from the indie world will be gracing the stages, including Four Tet, Les Savy Fav, Broken Social Scene, Los Campesinos, Local Natives, to name but a few. The organisers have also picked wisely when choosing local bands to add to the line-up - I’ve chosen a few I’ll try to see below, but you can preview the full line-up from the website here.

Since guest interviewee Matt mentioned them in the last column, I have become quite the fan of Eagulls. Musically they’re heavily rooted in American punk and slacker rock, but lyrically they have a very English take on things – you wouldn’t catch J Mascis barking about council flats with such force. Their tape release has long been sold out, but at their gigs you should pick up a CD which includes a rather special bonus track. They’ll be playing the Constellations Pre-Party on the 13th at the Brudenell Social Club alongside BEAK and Abe Vigoda.

Runaround Kids came to my attention after taking a runners-up spot in the Futuresound competition resulting in them playing Leeds and Reading Festival. The three-piece play a similar brand of the DIY indie-pop that has amassed Johnny Foreigner and Los Campesinos such dedicated followings. They’re actually from Wakefield but we’ll claim them for this column as they gig in these parts often and will be kicking things off at 2.30pm in ‘Mine’. Myspace

Chickenhawk’s new album Modern Bodies is released on 01/11 through Brew Records. They’ve been cast into the metal bracket but do away with the genres’ awful clichés like self-pitying lyrics and repetitive chuggery. The band is instead armed to the teeth with original riffs, powerful drum patterns, and heavy bass -creating something fresh, genuinely exciting and completely mental. Modern Bodies begs to be played at an unneighbourly, tinnitus inducing volume and I’ve been happy to oblige. For Constellations they’ll be thrashing about in ‘Mine’ at 9.15pm. Myspace

The aforementioned I Like Trains are due on the Refectory stage at 3.30pm. They’ll be closely followed by Sky Larkin on the same stage who will be playing songs off this year’s highly recommended second album Kaleide (read the DiS review here). The Larkins also support Frightened Rabbit at the Cockpit on 29th November, in what is a rather special line-up for a Monday night. Myspace

There will also be a poster exhibition in the Union foyer from travelling art circus Poster Roast. This will feature excellent gig posters from the likes of Drew Millward, Cameron Steward (twoducksdisco), Kate Prior, and many other ace people that make me wish I had more wall space. There’ll be artwork for sale, so bring money! Poster Roast

Elsewhere Blood Oranges are finally releasing their debut single; a joyful indie-pop band blessed with boy-girl vocals that pair together charmingly as demonstrated on the chorus of the A side ‘The French Word For Love’. To celebrate the launch they’ll be playing Nation of Shopkeepers on November 24th with fellow indie-poppers Standard Fare and Post War Glamour Girls. There’s a special offer of gig ticket plus the vinyl for just a fiver! Myspace

On November 11th, The Packhorse will host Tigers That Talked album launch party for The Merchant (released 8th November). Not only are Tigers magnificent live, but there will be a rare outing from the superb Olfar & The Feral Pets who’ll bring massive soaring choruses along too. Get over to Tigers’ website for a free download album teaser of’23 Fears’. Myspace

Another new band that have recently come to mine and seemingly many others’ attention are Loose Talk Costs Lives. They play catchy danceable pop songs reminiscent of both Vampire Weekend and Foals but with plenty of original ideas to distance themselves. They’re supporting the fantastic Jonquil at Nation of Shopkeepers on November 15th, worth the entrance fee for either band. Myspace

It may be a bit cheeky plugging my own gig, but it’s going to be a great evening and you can’t stop me! I have Scottish supergroup ‘Drever McCusker Woomble’ playing at Brudenell Social Club on the 8th November. Support comes from talented folky chap Gary Stewart who recently released his debut album ‘Boy Cries Wolf’. Come say hi! Myspace

Some more gigs of interest are:

New students and old timers alike, bear in mind that you can purchase the majority of tickets locally and help support our wonderful independent record stores; Crash and Jumbo.

In keeping with getting views from others involved in the Leeds scene I thought it’d be a good idea to have a word with Felix Young who promotes the popular Good Folk gigs in various Yorkshire venues. He’s seen a lot of great artists pass through Leeds year having put on shows with Stornoway, Wild Nothing, Shout Out Louds, Alessi’s Ark, King Charles, Blue Roses and tons more.

What has been your favourite release from a local artist this year so far and why?

Hard question as there are so many great bands in Leeds, we're really lucky. Probably the debut album by Glaciers called Here Come The Glaciers. With all the bands it's a bit hard keeping track of what came out when, but I'll add Sketches latest EP onto that list.

You must have seen a lot of local bands this year having promoted so many gigs, who have been your live favourites?

Paul Thomas Saunders. They're incredible, both on record and live. No one in Leeds sounds like them, and it's quite easy to sound a like these days.

What forthcoming gigs/events are you most looking forward to?

Wild Nothing were one of my bands of the summer and they're back in November (7th, The Harley in Sheffield). Really looking forward to that, especially as The Vaccines are supporting. You probably won't be seeing The Vaccines supporting bands this time next year. I’ve not seen them live yet but everything I've heard on record has been ace.

You can and should view the upcoming Good Folk listings here.

Finally, it’s worth mentioning that the excellent Leeds International Film Festival is running this month from 4th to the 21st of November. Further details are here.

As usual please let us know about anything going on in Leeds that you feel have been unjustly missed off, be it new bands, gigs, clubnights, or releases, get it added below…