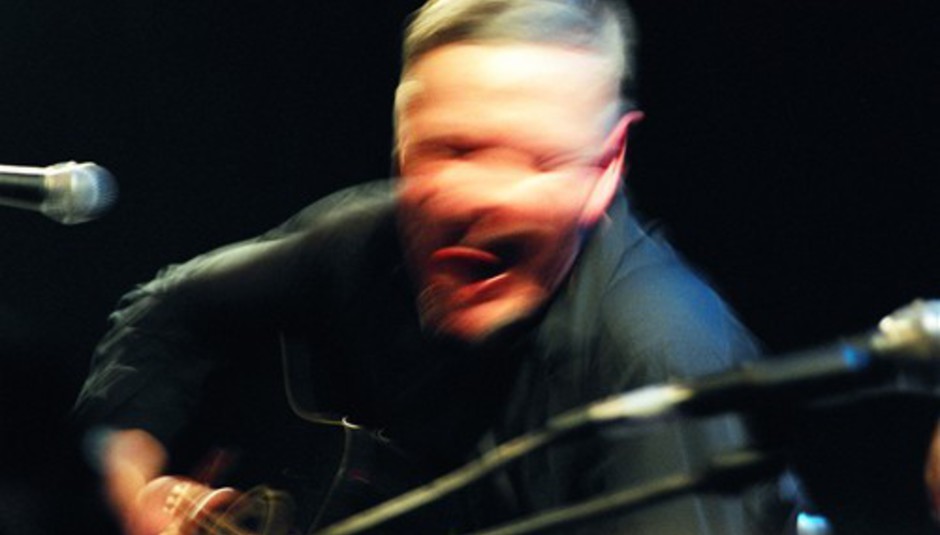 This year Mark Ward and Andrzej Lukowski went down to Birmingham's Supersonic festival, where they bore witness to Swans and some other bands. Here is their story.

Since it expanded into a three-day fest, the Friday of Supersonic has had the feel of a demented club night, with things kicking off at 9pm. Gum Takes Tooth are first on the Outdoor Stage, as the queues of hipsters and goths from around the country congregate at the Custard Factory. Clearly influenced by Lightning Bolt, but replacing Brian Gibson’s bass with a scuzzy wash of circuitry, and that band’s wrestler’s masks with bits of cloth wrapped round their heads, they soon feel at home. A non-stop barrage of hyper-fast drumming (the theme of the night) and whacked out treble quickly gets the party underway, and while the band express sincere gratitude for the crowd’s ecstatic response, it’s no less than they deserve.

The wild-eyed visage of Shigeru Ishihara, better known as DJ Scotch Egg, has been a habitual sight at the Custard Factory over the last couple of Supersonic weekends, and 2010 proved no different. As well as sticking around to enjoy the festival, he provided the one of its highlights with his latest project, Devilman. As in Drum Eyes, Ishihara acts as both bassist and a kind of beat conductor, utilising the ‘pointing and raising your hands’ technique of conducting pioneered by players in the London Improvisers Orchestra. Not that Scotch Egg ever seems entirely in control of his rabble: at one point, Bo Ningen’s Taigen clambers onstage to add howling vocal incantations; before long he’s doing the same from atop the crowd; King Midas Sound’s Kiki Hitomi weighs in with her own howls from the comfort of the back; there’s bald man in a suit and sunglasses whose only duty appears to be to walk to the front of the stage at the close of the set and raise his fist triumphantly; oh, and there’s also a samurai sword. However it’s arranged, the mix of dubbed beats, throbbing bassline and acid electro always retains some method in its madness and proves probably the easiest set of the weekend to dance to.

Fukpig are not a band that make you want to move your feet, unless, that is, you’re some kind of double-jointed freak with the ability to stick your toes in your ears. Featuring members of former Birmingham grindcore stalwarts Mistress, they are exactly the sort of band you expect to see at Supersonic: Brummies in Slipknot masks thrashing out riffs and 100mph drum fills. There’s probably a reason you don’t expect to see them anywhere else.

Headliners Napalm Death manage to make a similar formula – one which, in all fairness, they pretty much invented – infinitely more enjoyable. They don’t seem to take themselves too seriously these days, and there’s an endearing self-effacing quality about the act: “Thanks for sticking around and checking us out,” says Barney Greenway, to a crowd liberally peppered with hardcore fans of the Death, before launching into another pummelling slab of heavy noise. Better still is the anti-fascist message he propagates before covering the Dead Kennedy’s ‘Nazi Punks Fuck Off’: “Use yer loaf: Nazis – silly bastards”. There are also thunderous riffs, battered drum-kits, hilariously entertaining second-long blasts of song and a constantly shifting rhythmic dynamic. All this and a powerful correlation of aggression and intent can’t help but make you think that, if Kurt Cobain has been a fan, they’d be as broadly revered today as The Melvins are. (MW)

Flicking through to the entry about Eagle Twin in Capsule’s nice smelling Supersonic programme, I see the world ‘groove’ written down, followed later by the word ‘grooooooove’. Accepting you may need telling they’re a sludge band, I can’t really think of a better description for what my first band of the weekend does than ‘grooooooove’. ‘Grooooooove’. Big, tight, loud groooooooves to headbang to slowly, with one’s entire body.

Hypnotic in a different way is Lichens, who busts out some very pretty, slightly wallpapery drones that nonetheless keep a crammed Old Library more or less entranced thanks to an old skool backing projection of some PSYCHEDELIC CLOUDS. Nice.

Last time I saw *Dosh was in a super intimate space and it was utterly magical – here his lovingly layered, somewhat oddball funky breaks and synths don’t quite conquer a chilly Brummie night; it’s fun, but we’re not sucked into the world that he’s painstaking constructing on stage, piece by piece, layer after layer, and we potter off to the warmer confines of the Theatre to watch Wire journalist David Stubbs give a talk on why he is of the opinion that proles like Rothko but not Stockhausen, which we exit presently.

King Midas Sound manages to steal the day for me fairly comprehensively: Kevin Martin’s dub alter ego starts kind of tentatively – some of the higher frequencies are lost in the huge Space 2, and vocalist Roger Robinson never really makes much impact – but as the bass swells to Brobdingnagian proportions, Martin hits upon something genuinely awesome, a huge sound gilded with roaring guitars and sythy stabs that teases the boundary between dubstep and industrial and near as damn steps over. There is dancing. There is what appears to be pretty amazing rewiring of ‘Skeng’. It is all sort of whoa. We have to have a bit of a sitdown, following which we witness the much anticipated return of Godflesh. They are very loud, very dry icy, and on occasion Justin Broadrick’s juddering guitar prises the jaw open, but I’m pretty much a Godflesh noob and after a while I start feeling a bit guilty for not enjoying it as much as the band’s adoring hardcore. No such guilt for Melt Banana - there must be something right with the world when these guys are (sort of) headlining any music festival, anywhere. I am a drunk man by this stage, but the start of the set is deliciously weird, a limited number of figures in medical scrubs tweaking some machines, alarmingly. I go and buy some crisps (spicy Doritos) and the figures appear to have turned into Melt Banana, who I think rattle off about 700 songs in half an hour; not sure if it’s the mix, but it feel a bit more straightahead punky and less electronic than the last time I saw them, maybe not quite so rewarding, but still HEAPS OF FUN. (AL)

Pierre Bastien is one of those people who you gawp in amazement in a festival situation and then never think to seek out their music, but though his arsenal of homemade instruments is a good portion of the fun – the miniature trumpet strapped to a waterbong is particularly good fun – the music is genuinely pretty good – fly, noir-ish type stuff that makes you want to be a Seventies copper. Or something.

Peter Broderick initially seems a bit out of place, the singer-songwriterisms early in the set marking him as rather lightweight in present company. But as the texture become more processed and haunting, the vocals switch sampled layers of cryptic statements, and above all as Broderick palpably throws his heart and soul into his performance, then his centre of gravity grows ‘til finally the gig ends with him on the floor, howling melodically, room fully won over, some annoying clicking noise from the bar the only dissent.

Jailbreak consist of Heather Leigh Murray screeching in an ungodly fashion and doing ungodly things to a pedal steel, whilst Chris Corsano does various jaw dropping things to some drums. I have no idea if they’re playing songs or just jamming it out, but it’s Pretty Cool. Ruins Alone - aka Yoshida Tatsuya – draws a massive crowd and offers an appropriately gargantuan sound, walloping the shit out of his kit and samplers to create a barrage of noise that’s clipped, ferocious, technically dazzling and gratifyingly camp. Nissenmondai’s disco-kraut is a lot of fun, sleek and propulsive and gleaming and sounding just peachy on the outside stage, with drummer Sayaka Himeno is as impressive as any sticksperson here. They’re maybe a bit repetitive, but the crunchy, distorted finale throws some much needed dirt into the gears. Whether it’s because of their NME endorsement or because they’ve not actually put out much music, Factory Floor don’t draw the biggest crowd, and in present company all that hype about their being the loudest band in the country seems pretty laughable. Yet after about half a slightly trying hour of tough electronics and hissing distortion, it all builds into something genuinely quite staggering, a euphoric, ravey crescendo that near enough makes it all worthwhile.

Hallogallo sound beautiful, and though their set is broadly identical to the one they played at Primavera, it’s excellent to hear Michael Rother’s agelessly vivid back catalogue so precisely resurrected under night air. Yet thrilling as it might be to (sort of) be watching Neu! in the flesh, it’s all utterly dwarfed by Swans. Michael Gira has a casualness about his storied past that’s virtually a negative of Rother’s curator's enthusiasm for his, with the band’s recent My Father Will Guide Me Up a Rope to the Sky accounting for a good three quarters of the set. But in such a thunderously tangible demonstration of sheer musical presence, the relative lack of ‘hits’ is by the by. The opening ‘No Words/No Thoughts’ lasts for 27 minutes, begins with Thor ‘from Shearwater’ Harris hammering eerily at some sort of fabulously complicated looking wall of chiming things for at least five minutes, goes on to mostly sounds like Johnny Cash being roasted in the flames of hell, and at its peak the wall of sound is so ferocious – yet so diamond precise – it’s a wonder chunks aren’t gouged out of the shuddering air. The only real misstep is Gira’s banter, when a half hearted attempt to impugn British manhood is shot down by a heckler’s retort of “where’s your beard then?”. The rest is astounding: this may be very different to the Swans of yore, but their legend is wholly vindicated. (AL)