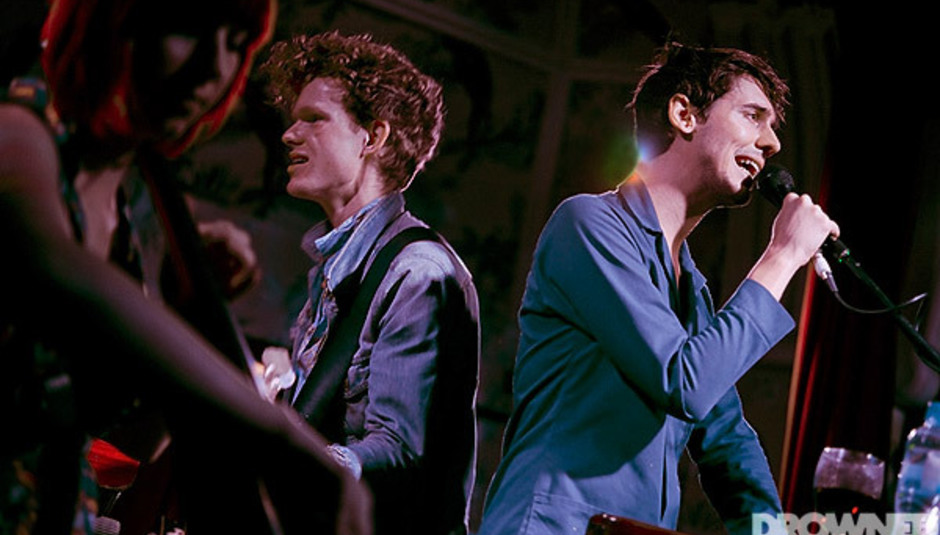 In July 2009 Grammatics had just been nominated by the good people of DiS for our very own Mercury Music Prize alternative, the Neptune award. Jump forward little more than a year and this otherworldly Leeds band are slowly getting used to ‘normal’ life again having just completed the last dates of their last ever tour. DiS asked a few questions to find out exactly why Grammatics have decided to split.

As Owen Brinley, the silken voice and face of the group, starts to tell me, he’s had days of unreasonable mood swings and fits of panic over unpaid bills, I wonder whether he thinks it was really worth it.

“You’ve just been drinking for two weeks and playing every night, then you get back and reality completely slaps you round the face, basically. Our last gig was really good but we had a few technical issues. By the end of the gig it all worked out though and everybody was singing the last few songs back to us. The crowd were great and that made up for it, so we did finish on a high still.”

Having caught the Bristol show the previous week, I can well believe it too. The band delivered a delicate mix of old and new material, shifting between the urgent calls of ‘Relentless Fours’ to the stripped bare intimacy of ‘Cruel Tricks of The Light’ – a challenge in itself considering the less-than-perfect scene-pub surroundings. And above all this, they seemed to be having fun. Laughing off momentary glitches and joking darkly about their financial position, it seemed odd to think this group would soon cease to exist.

DiS: So, Owen, what is the reason behind Grammatics’ seemingly early departure?

It’s just a bit of everything to be honest. The ‘Krupt’ [new song and EP title] and the T-Shirts which say ‘Grammatics have gone bankrupt’ were us having a bit of a joke really. We’d be lying if we said financials were the only reason the band were splitting up, although they have been a major factor. Being in Grammatics has been a full time job for all four members of the band but we’ve never been able to take any money personally from gigs, touring and merchandise because we’ve owed so much to different parties. Mistakes with management and us just not being very good with the business side of things have meant that we’ve just had stacks and stacks of invoices to pay off. The pressure of that isn’t a very conductive environment to write and be creative in.

We haven’t been forced to split up. But if we’d continued to fight on, continued to try and fight our way forward with this band and forced ourselves to be creative enough to finish the second album with all the financial pressures on us, we’d make something which was substandard compared to the first album and we really didn’t want to damage the back catalogue of songs we have.

Another reason we’ve split up is because half the band want to live in London and half the band want to live in Leeds. I don’t think anyone in the band is willing to do it half-heartedly and the amount of time it takes us to write and arrange a song, I couldn’t see it working. Plus the cost of people coming back to rehearse and taking equipment across the country is just ridiculous. I think everybody in the band will probably work with each other again in the future, in some shape or form, but not as Grammatics.

Fortunately it’s all ended kind of happily though. The overwhelming support we’ve received from our fanbase through Pledge Music (music funding website) is hopefully going to tie up all these financial problems. We’re still kind of euphoric and overwhelmed that the response [to the farewell EP] has been what it has because we honestly didn’t think anyone would care.

DiS: Is there anything you might have done differently if you had your turn again?

The thing with Grammatics is we’ve always had the attitude that as long as the music’s coming out alright we don’t care about anything else. But at the same time, just simple things that we should’ve done like as soon as we got any money we should’ve bought our own van - it’s an obvious thing but that’s going to cost you a fortune if you don’t buy your own van. But I don’t know really...

DiS: So what’s next for Owen Brinley? Do you have anything else lined up?

It’s a really difficult question still because, even to this day, a lot of my day is taken up doing Grammatics things, on the business side of things or I’m doing a lot of interviews at the moment. Grammatics is still on my mind. I need that gap to appear in my life where there’s a big great void. I need to be doing something to feel good about myself as a person. I keep sitting down with a guitar and start trying to write something and it doesn’t feel right yet. There’s not enough distance between myself and Grammatics.

DiS: Come on then, in the style of Big Brother, let’s have your best bits...

I’ve got three or four fondest memories. My joint top-fondest memories are the tours we did with Rolo Tomassi and Pulled Apart By Horses. Those three bands, together on the road: we are all really, really good friends, so that was absolutely amazing from start to finish. Especially when we got James (Brown, dodgy- legged speaker-stack-climber and guitarist, Pulled Apart By Horses) out of hospital and he managed to join the tour.

Another was the ‘Bloctober’ tour we did supporting Bloc Party. We got a bit of a taste of the big time on that tour. It was really humbling that they were big enough fans of the band to just take us as a sole support. We couldn’t afford to do the tour, we weren’t going to get any tour support from the label at this stage, and without even knowing that Bloc Party made sure that we got big enough fees to be able to do it. Normally you get fifty quid a night supporting on a big tour and you do it for the privilege of playing to their fans but this wasn’t like that at all. They were so kind to us and obviously, doing 23 dates, playing to thousands of people every night is going to be a pretty unforgettable experience for a band like us!

And the third is just making the album and going off to do festivals at weekends the summer before last (2008). We were nearly killing ourselves every weekend, going crazy and then going back to the studio and getting back down to recording. James Kenosha, who has produced everything we’ve done is also like the fifth member of the band and will let us just try anything in the studio. Without him and being able to record in his studio I don’t think we’d have been able to make the records we have, so that’s my other highlight.

The farewell EP from Grammatics, KRUPT, is available in limited edition only through Pledge Music

Listen to an exclusive track from the EP here: